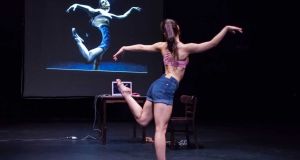 Six stooped figures with their backs to the audience slowly begin to shudder to a pulsating heartbeat of sound. In time, this murmuring movement delicately gathers pace. We watch the dancers rising and turning, guided by the rhythm; their feet begin to twitch and inch forward or retreat, arms swaying in unison, sideways, altering our perceptions of them and shifting our focus and engagement.

Elvedon, from Greek choreographer Christos Papadopoulos, is one of several shows in the opening weekend of this year’s Dublin Dance Festival that play with perception and skilfully manipulate our ways of seeing dance and its elements: movement and space, music and time. In this show for Leon and the Wolf, the dancers move to Papadopoulos’ invisible baton, as their controlled micro movements, individual and collective, create serene permutations and patterns, and a diverse and mesmeric shifting of ground.

The work’s score by Coti K is a meditation on time passing, underlined by the sound of ebbing waves on a pebbled shore. Each dancer seems to have an instinctively individual journey to make, as if traversing a life, sometimes appearing downstage alone and then melting into the shadows of the others in a slipstream of collective movement. The dancers never look back, not in retreat, not even in their sudden controlled bursts of circular free running. Their gaze and focus are always on the next phase, on their relentless movements, as though part of a hidden eco system or a mathematical puzzle. It’s as if an incessant lifeforce is drawing them from the margins to the centre.

This playing with perception is also evident in some of the studio showings of First Looks, a curated programme of works in progress. These include a glimpse of Liz Roche’s Totems, which will be part of a programme of events for the re-opening of the refurbished wings of the National Gallery this summer. In it, Roche considers how we watch and observe and are also the observed and the surveyed. This theme is also present in Monica Munoz’s work. These work-in-progress shows provide an insight for the creative process. Most of the ideas or fragments are there waiting to be fitted together to fulfil an artistic intent.

Over at the Ark in Temple Bar, eyes are wide open among the six year olds in the audience for Balletto di Roma’s At Home Alone. It’s a clever duet with technology where, again, perceptions are expanded and contracted, this time with some creative technology. This allows Roberta Racis to engage in some fine jazz ballet and energised movement in real time while creating a distorted, humorous image of herself with a laptop that is magnified on a screen. The fact that the audience can observe themselves like the dancer, elongated and twisted, all mouth or no ears, long arms and no body, only adds to the entertainment.

There is plenty of strut and posing emanating from the Top 8 hip-hop dance battle at Project Arts Centre. Dance can be electric and energetic and these contestants led by local dance Tobi Omoteso are on fire. Bodies are spinning and rolling, breaking and krumping at an alarming pace. What this event has in common with other Dublin Dance Festival shows is similar levels of percussion, dexterity, passion and spectacle. This crew would have left the Jets and the Sharks in the ten cent place as feisty young women also take on the challenge in a contest fuelled by the sounds of UK and Latvian DJs and dancers. They are light on their feet, and brimming with attitude. In the end it’s all about being seen.