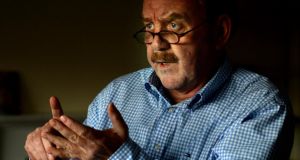 Michael Colgan: he has forged indelible associations between the Gate and the works of Beckett, Friel and Pinter and boosted the careers of Conor McPherson, Selina Cartmell and Wayne Jordan. Photograph: Cyril Byrne / The Irish Times

There is an anecdote that Michael Colgan, outgoing artistic director of the Gate Theatre in Dublin, likes to share with any acquaintances considering a career move.

When Colgan, then director of the Dublin Theatre Festival, was first negotiating his contract with the board of the Gate, he expressed his dissatisfaction with the three-year term on offer.

“I’m not happy,” he told the chairperson. “Well, okay Michael,” came the response, “how about five years?” (Pause for dramatic effect.) “No, pal,” said Colgan. “You’re going the wrong way.”

Or so the story goes. Remarkably, Colgan, a theatre producer for whom the word “impresario” seems too meek a description, has now worked with the Gate for 33 years, and on his own terms.

When news of Colgan’s retirement emerged on Friday, the theatre had just enjoyed a celebrated run of The Importance of Being Earnest at the Spoletto Festival in Charleston, South Carolina.

The Gate’s State funding, however, has fallen almost 17 per cent in recent years, from almost €1.1 million in 2009 to €860,000 this year, while attendance levels – which Colgan, a savvy producer, has long maintained at 80 to 90 per cent to break even – have recently begun to wane.

Colgan turns 66 this year, but with the Arts Council’s newly published plan forecasting “alterations to established investment patterns, budget allocations and funding relationships”, it may be an opportune time to bow out.

Colgan is only the second artistic director in the Gate’s 88-year history, following its founders Hilton Edwards and Micheál Mac Liammóir. His time has been marked by towering successes, at home and abroad, forging indelible associations between the theatre and the works of Beckett, Friel and Pinter (all of whom have had festivals staged in their honour), boosting the careers of Conor McPherson, Selina Cartmell and Wayne Jordan, and courting international celebrities such as Lia Williams, Ralph Fiennes, Frances McDormand, Michael Gambon and others.

He has rarely been shy about his achievements, including receiving the honour of Chevalier dans l’Ordre des Arts et des Lettres from the French government in 2007 and an OBE from Queen Elizabeth in 2010.

His departure, however, has been a much quieter affair. The post has been advertised through recruitment firm Amrop.

Colgan, who has programmed the theatre up to the first half of 2017, will remain in the position until a successor is appointed, which Finan expects to be no later than July next year. He will also vacate his board position on his retirement, and his successor will not fill it.

He will not be engaged with the recruitment process, which will be conducted by an independent subcommittee with two externs, one local and one overseas.

“We felt that this is a new era and that Michael will not be involved in the new appointment and selection process, which is the correct governance,” said Finan.

When talk of Colgan’s impending retirement spread widely through the arts sector earlier this year, The Irish Times approached him for comment. He responded with a line adapted from Mark Twain: “Rumours of my retirement have been greatly exaggerated.”

In fact, a spokesperson for the Gate said on Friday, his decision was made a year ago, and downplayed because “he doesn’t want a long goodbye”.

As far as theatre exits go, this one seems greatly unexaggerated.