Abbey Theatre to ‘interrogate rather than celebrate’ Easter Rising 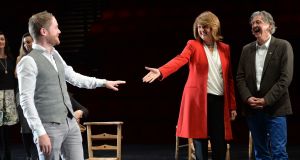 The Abbey will “interrogate rather than celebrate” the legacy of the Easter Rising, its director Senator Fiach Mac Conghail said while announcing a programme to mark the centenary of the events of 1916.

Entitled Waking the Nation, next year’s programme will include three world premieres of new Irish plays, to be staged “in a conversation” with new productions of familiar classics from the Abbey’s repertoire, including Sean O’Casey’s The Plough and the Stars, Frank McGuinness’s Observe the Sons of Ulster Marching Towards the Somme and Tom Murphy’s The Wake.

‘The Abbey Theatre was a central part of the Irish Cultural Revival,” said Mac Conghail. “Today we carry the legacy of these remarkable individuals as we embark, with our artists and audiences, on a year of reflection and conversation through theatre.”

Beginning with the Theatre of Change Symposium, to address present-day conflicts and future challenges in Ireland, the programme also looks beyond national boundaries. Directed by Sean Holmes, The Plough and the Stars – the Abbey’s third staging of O’Casey’s play in seven years – will tour Ireland and visit Washington DC’s Kennedy Center, while David Ireland’s provocative new comedy Cyprus Avenue, directed by Vicky Featherstone, will transfer to The Royal Court in London.

During Easter week a play from the Golan Heights, New Middle East by Mutaz Abu Saleh, will be performed on the Peacock stage. “We have to be careful about our sense of national exceptionalism,” Mac Conghail said. “Instead of commemorating 1916 we are reflecting on, perhaps, the failed potential of 1916.” If gender equality was one such potential, it may be disappointing to find just one woman writer on the programme announced so far.

Tina’s Idea of Fun, a new play by Sean P. Summers, and Town is Dead, a chamber musical by Phillip McMahon and Raymond Scannell, will address disillusionment, poverty and homelessness in a socially critical spirit akin to O’Casey’s, Mac Conghail said. Similarly, Tom Murphy’s The Wake – which inspired the title Waking the Nation, and its intended double meaning – and Frank McGuinness’s Observe the Sons of Ulster Marching Towards the Somme ask trenchant questions of materialism and tribalism that will be taken up by the new plays. “I think there is unfinished business about building this republic,” Mac Conghail said.