Is there a future beyond the local community for plays in Irish? A new generation of theatremakers are finding out 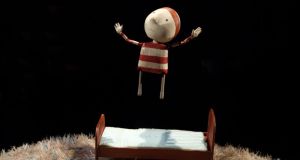 The Way Back Home: Branar’s new show is based on an Oliver Jeffers picture book

Máiréad Ní Ghráda’s An Triail, which was produced as part of Dublin Theatre Festival in 1964, is one of the most important plays of the Irish dramatic canon.

It stages the psychological trial of a young unmarried mother, who finds herself abandoned by her lover and ostracised by the local community. Ní Ghráda used surtitles and music to distance the audience from the dramatic action, and to encourage them to turn a critical eye on the social structures that lead to the protagonist’s suicide.

In the 1960s, Irish-language theatre formed an important part of the festival’s remit. At the Abbey Theatre it was a central aspect of programming. Company actors were required to be bilingual, one-act Irish plays were commissioned to provide interval- and postshow entertainment for English-language productions, and Irish-language pantomimes were a crucial part of the repertoire.

Dublin Theatre Festival maintained an impressive commitment to Irish-language theatre for the first 30 years of its history, but it has not produced an Irish-language play since 1996.

And there have been only two Irish-language productions at the Abbey in the past decade: a translation of Synge’s Riders to the Sea, in 2004, and Paul Mercier’s Setanta, presented by Fíbín Theatre, at the Peacock, in 2011. This month Fíbín will present Mercier’s new play, Réiltín, at the Peacock, as part of Dublin Theatre Festival.

Mercier is a Gaeilgeoir, and has had success with Irish-language drama on television, but Réiltín is only his second play in Irish. As he explains from his home in Connemara, he has “grappled with the question of what an Irish-language theatre is. Is it different theatrically, thematically, stylistically from English-language theatre? If not, does it need to be in Irish?”

Most often he has found the answer to be no. “I think the only way to make [Irish-language theatre] work, the only future it has, is as a community theatre. It should be for an Irish-language-speaking community, about their issues, their needs.”

Within this there is an opportunity to address preconceptions and stereotypes. Réiltín, for example, is about the Irish-language community but in an urban context, telling the story of a young singer on the cusp of fame. In its form it challenges expectations of what an Irish-language play might be. Mercier says he would be “hesitant to even call it a play. It’s more of a kind of musical installation.”

The production will use music and English surtitles to make it accessible to a non-Irish-speaking audience, and Mercier hopes the potential dislocation will be part of the overall experience. “It’s a piece for Irish speakers, about [their] alienation from the environment around them.”

The Galway-based company Moonfish Theatre scored an enormous hit at Galway Arts Festival this year with more traditional subject matter, an Irish-language adaptation of Joseph O’Connor’s Star of the Sea. Kate Costello, producer with the company, says that the company sees itself as bilingual rather than as an Irish-language company. “We are Gaeilgeoirs,” she says, “but that is just one part of the creative mechanism we use alongside storytelling, puppetry, live music to create a unique theatrical experience.” She says it can be “challenging to overcome prejudices in terms of attracting audiences. Once people know it’s in Irish they can be hesitant to come, but by making it part of a plethora of storytelling techniques you can shift negative perceptions.

It was the negative perceptions of the Irish language that inspired Catríona Ní Mhurchú’s play Eating Seals and Seagulls’ Eggs, which the actor-writer performed at this year’s Tiger Dublin Fringe. The play was inspired by her realisation of her status in Irish culture after being racially abused on a bus for speaking in Irish.

Ní Mhurchú lives “in a predominantly English-speaking environment. Certainly my story, in terms of how and what I’m presenting, wouldn’t feel truthful if it was completely in Irish. I suppose in a way the piece is a mediation of the culture of one language, Irish, through two languages.”

Marc Mac Lochlainn, company director of Branar, says the duality of Irish culture has been frustrating and liberating. Branar has a long history of international touring, which has ensured that they “have never had any problems with communicating with our audience”.

Still, in Ireland, there is “a continued reservation about the Irish language”. Mac Lochlainn gives the example of its production Mise Scéal Cailín, which toured Ireland and Britain last year. “We had several requests to change the title of the show from Irish, but abroad it didn’t matter.” The company’s next production, ’Twas The Night Before Christmas/Oíche Roimh Nollaig, acknowledges how difficult it can be to sell an Irish-language show.

Branar’s new production, The Way Back Home, which premieres at Dublin Theatre Festival next week, was never going to be in Irish; based on a picture book by Oliver Jeffers, it has been created without words. Instead Branar relies on its exquisite puppets to tell the story through gesture alone.

As this new wave of Irish-language theatremakers are showing, it is an attention to artistic quality rather than cultural commitment that will ensure they find an audience for their work.

Réiltín is at the Peacock Theatre, Dublin, until tomorrow. The Way Back Home is at the Ark, Dublin, from Septermber 30th to Oct 4th. dublintheatrefestival.com