Seamus Heaney loved dirty jokes? Tell us another one

Actor Stephen Rea on the late Nobel laureate’s warmth, wisdom and influence on his career 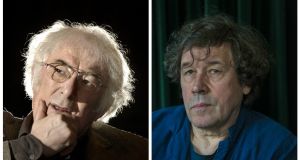 “Perhaps I was too much in awe of him to describe him as a friend,” says Stephen Rea, right, of Seamus Heaney. Photographs: Matt Kavanagh, Brenda Fitzsimons

“I’m going to be in trouble for saying that,” Stephen Rea says. We’re in the Merrion Hotel, where Rea has been talking about the Field Day programme of events taking place in Bellaghy, Co Derry, this weekend, in honour of the late Seamus Heaney.

He picks up his cup of Irish Breakfast tea (he drinks it black), and looks across at me with his big basset hound eyes, knowing he has tossed a grenade into the conversation.

Rea has just told me that his late friend, the Nobel laureate Seamus Heaney, loved to tell filthy jokes, really vulgar ones. He’s at pains to emphasise quite how filthy they were, and how many of them Heaney had in his repertoire. “What I have discovered is that the most sensitive and delicate writers tell the dirtiest jokes,” Rea says.

I am agog. “Can you remember any of them?”

Rea looks alarmed. He wants to take the revelation back, but it’s too late. “I’m not going to tell you a vulgar joke.”

He tells a different joke instead, that Heaney apparently loved to recount, about two missionaries caught in the jungle with cannibals, who give them a choice about how they will die. It’s not really a joke at all; it’s more a dark philosophical statement about how suffering in life is inevitable.

After Rea has recounted it, in his compelling actor’s delivery, he nibbles on a little heart-shaped biscuit; four of them arrived with his tea. It’s all marvellously surreal.

Rea first met Heaney when the former was a student at Queen’s University Belfast. It was a public reading of some of Heaney’s poems. Astonishingly, given how popular Heaney’s readings were to become as his reputation grew, and how stirringly he read his own work, it was Rea who read the poems that night. Heaney sat in the audience.

“Those poems were never published,” Rea says. The one line he can recall from those poems was “Lead us not into tight blue jeans,” which is almost as startling as discovering Heaney’s fondness for vulgar jokes.

Seamus Heaney was a huge figure in my life. Perhaps I was too much in awe of him

They didn’t meet again until about six years later. Brian Friel, Heaney and Rea went drinking in Dublin. He can’t recall exactly where, but thinks it was the Shelbourne. “Friel wasn’t a pub man. He liked drinking in hotels.” Friel liked to drink gin. Heaney and Rea drank whiskey; “Powers Gold Label.”

“Seamus Heaney was a huge figure in my life. Perhaps I was too much in awe of him to describe him as a friend, but I was frequently in his house and had dinners there. He was full of warmth and wisdom and laughter. Mostly, our meetings were based around things to do with Field Day. I had a different kind of friendship with Friel; I hung out in his house a lot. My friendship with Heaney wasn’t like that.”

Did Heaney ever share his work with Rea in advance of publication, as many writers do in their circle of friends? “He did share the script of The Cure at Troy and Sweeney Astray; two dramatic pieces. I was to read them on the radio.”

Rea last saw Heaney at the opening of a Sean Scully exhibition in the Hugh Lane Dublin City Gallery. “We all went for dinner afterwards in the Clarence.”

That poem will never be published; it’s private to us. It was just like Seamus; he was always so generous

As it happens, there is a Sean Scully painting on the wall of the room we’re in, and Rea turns round to look at it, sighing. “It’s unbelievable really, that he’s dead. Heaney’s death was sudden and unexpected.”

Heaney wrote a poem for Rea’s two sons, as a gift. He wrote it on a Japanese fan. “We had it on the wall, but we took it off because we were frightened of it fading. That poem will never be published; it’s private to us. It was just like Seamus; he was always so generous.” Rea’s youngest son currently has the fan.

Although the poet is dead, the poems are eternally alive

Rea’s own favourite Heaney poem is Exposure, the final poem in his 1975 collection, North. It has a reference in it to a wood-kern, who is “long-haired and thoughtful.” “I was a bit of a long-haired kern myself.” (He still has an abundance of quite long hair.)

Rea has a copy of Field Work in his pocket, which he pulls out, and starts rifling through. “Although the poet is dead, the poems are eternally alive,” he says. And then, “At a certain point, he never lets you miss the truth.”

Last September the Seamus Heaney HomePlace opened in Bellaghy, the village where the poet is buried. It cost £4.25 million to build, funded by Mid-Ulster District Council. Although it has yet to mark its first anniversary, estimated annual running costs will be £500,000, also covered by the council. The intention is to provide a landmark destination to the many readers of Heaney’s work.

“I don’t think he’d be saying that I haven’t been dead long enough to merit this centre,” as Rea puts it.

I think they are keen to make sure people are aware of the existence of the HomePlace, and that it doesn’t end up being an academic pilgrimage

Part of the centre is the Helicon performance space, which has seating for 189 people; a sizeable venue for a town, let alone a small village. Rea did the first public reading there after it opened, and he is now curating the Field Day Weekend at the venue. Who does he think is the audience for the event?

“A lot of local people, as well as people travelling. I think they are keen to make sure people are aware of the existence of the HomePlace, and that it doesn’t end up being an academic pilgrimage.”

On Friday there will be a screening of Something to Write Home About, a 1988 documentary about Heaney’s life. It was written by Heaney, and directed by the late David Hammond.

When Hammond died in 2008, Heaney wrote his obituary. He described Hammond as “an Ulsterman who was at ease with being an Irishman, a lifelong resident of Belfast immune to its constricting ideologies, free from its sectarianism, exultantly and resolutely his egalitarian self”.

After the screening, Rea will read the obituary. “The connection between those two men was very strong. He alludes to it in the obituary, very delicately but energetically, without ever being sectarian himself,” he says.

Also on Friday evening will be a performance by  fiddle player Paddy Glackin who will perform with Rod McVey. (Liam O’Flynn, who frequently collaborated with Heaney in their The Poet and the Piper performances, was scheduled to appear but has had to withdraw due to illness.)

Once a month, on a Saturday, the HomePlace presents an ongoing event that is aimed at reflecting in different ways on Heaney’s work. They are inviting a number of theatre directors to respond to one of Heaney’s books of poetry. It’s a loose invitation, with the director free to interpret the work as they wish. On this Saturday, it’s Rea who will be directing a dramatised reading of the book currently in his pocket, Field Work.

In addition to Rea’s own contribution, actress Bríd Brennan and musicians Neil Martin and Rod McVey will also take part. The event will be followed by a discussion with the audience. One of whom might possibly even tell a joke.

For more information on the Field Day Weekend and how to get tickets, see www.seamusheaneyhome.com

Say ‘whistleblower’ and the Irish hear ‘informant’ or ‘snitch’
7

Hong Khaou: ‘Vietnam is always seen as a victim. I wanted to show it as it is’
9

Cuties controversy: If you haven’t seen it, you don’t know what you’re talking about
10