Save us from pop-culture politicians

Give me Jeremy Corbyn, who can’t tell Ant from Dec, over air-guitaring Enda Kenny or rock-star-greeting Tony Blair 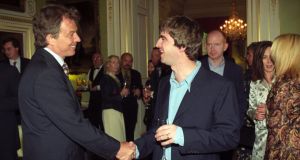 Jeremy Corbyn cannot recognise Ant and Dec. You snob! Go back to Islington and your Maoist book club. How can you hope to lead the British Labour Party when you can’t tell the former PJ from the erstwhile Duncan?

I’m joking. These gotcha quizzes are the lowest form of political interrogation. In this instance Victoria Derbyshire, hosting a BBC debate between Corbyn and his challenger for the leadership of the party, Owen Smith, ran with questions about Taylor Swift, Justin Bieber and the price of petrol.

The supernaturally unimpressive Smith, who reportedly fails to recognise himself each morning in the mirror, did a little better on the pop-music questions but failed to know the score in some soccer match.

This isn’t good enough. I won’t trust either man to lose the next UK general election until they can list every track on the last Tinchy Stryder album.

I’m joking again. To be fair to Corbyn – “That’ll be a first for the mainstream media,” you snort hilariously – he struck exactly the right tone when failing to identify the minute Geordies.

He apologised with a mild smile, which confirmed that, although he wasn’t proud of his ignorance, he knew it wouldn’t ruin his career. Crucially, he didn’t come across like one of those jerks who boast about not owning a television or never having eaten a Big Mac.

Indeed, despite being middle class enough to be played by Richard Briers – he was born in Chippenham to a maths teacher and an electrical engineer – Corbyn has sold himself very effectively as the Ordinary Man. He has his allotment and his cheese sandwiches. He has his inexpensive sports jackets and his meter-reader shoes.

You would expect an ordinary fellow to be chewed to pieces at prime minister’s questions, and so it has repeatedly transpired.

So there is no need for Corbyn to pretend an affection for popular culture. Thank heavens. Lord save us from the politician who fakes engagement with mainstream telly, pop music or that Local Sports Team.

Why do they do it? Have you ever met anybody who changed their vote because one candidate knew the difference between The Mission and The Cult?

There was one brief period when the act did seem to work. Now that the British people have collectively decided that Tony Blair is the most demonic Englishman since Egbert the Cannibal it’s easy to forget that he was once regarded as a breath of fresh air.

In the mid-1990s New Labour somehow managed to persuade key representatives of Britpop, the most gruesomely drab musical movement of the past century, to put their shoulders to the party wheel. John Major was just about young enough to have enjoyed The Beatles, but he was more interested in cricket.

That aberration aside, politicians have invariably looked like fools when they’ve tried to connect with the pop zeitgeist. Even Blair, the best actor Number 10 has seen, seemed a buffoon when he intervened to save Deirdre Barlow, Coronation Street’s perennial punchbag, from an unwarranted murder conviction.

Do you still wake up screaming with thoughts of Enda Kenny at that Bruce Springsteen gig? His excruciating burst of air guitar set up a conundrum yet to be resolved.

If he was doing it for the benefit of the punters below then he is so tragically unaware of how he is perceived we should celebrate him for remembering to wear trousers. If this is genuinely how he enjoys a rock concert then, his feet still embedded in 1973, he should be pitied rather than ridiculed.

Worse still was David Cameron’s inability to remember the soccer team he pretended to support. What made his saying “West Ham” when he meant “Aston Villa” so deliciously painful was the unmistakable realisation on his face halfway through. For once this smooth operator saw no way out of a hole that he never needed to dig.

As Corbyn demonstrated, the trick is to like what you like – collating manhole covers, in his case – and show neither pride nor embarrassment at not recognising pop-cultural phenomena. We live in fear of Hillary Clinton’s first attempt to slip a Lady Gaga lyric into one of her speeches.

When that day comes it will seem clearer than ever that the current presidential incumbent is just about the only western leader who can pull this stuff off. Would any premiere other than Barack Obama have been able to call Kanye West a “jackass” with such supreme confidence? I wouldn’t be surprised if he can tell Ant from Dec.