Pressing on: the journals that are sticking to print

Print publications are under increasing pressure, but the editors of the ‘Cork Literary Review’ and ‘The Penny Dreadful’ are confident old-fashioned books will not go away 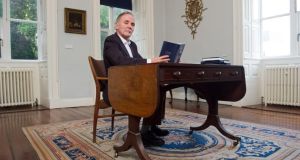 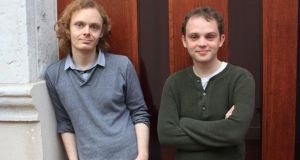 Marc O’Connell and John Keating, editors of The Penny Dreadful

The debate about the so-called death of print is an evolving story, as the popularity of ebook readers such as the Kindle and iPad changes people’s reading habits. However, many publishing industry experts believe print will continue to play a role in the way readers experience books. For publishers, there is the dilemma over whether they will produce books in print, digitally, or both.

For Eugene O’Connell, poet and editor of the recently published 15th issue of the Cork Literary Review, print suits his publication. It is an eclectic mix of poetry by the likes of Gerard Smyth, Bernard O’Donoghue, Matthew Sweeney and Mary Noonan as well as interviews with Thomas Keneally (author of Schindler’s List) film-maker Ken Loach, the late poet Dennis O’Driscoll and a revealing conversation with John B Keane’s widow, Mary. The handsome hardback book is very much a labour of love for O’Connell. It is published by Bradshaw Books in Cork, with funding from the Arts Council.

To tap further into the US market, there are plans to produce the Cork Literary Review as an ebook. But O’Connell says that, “while the publishing world is going digital, the problem is that publications like the Cork Literary Review don’t have the same readability on the internet. Almost anyone can start a literary journal on the internet. But the problem is that they’re not assessed by peers and are not reviewed in newspapers.”

One of the selling points of of the Cork Literary Review is that “it’s an artefact, a material thing. A person can move around the stories, articles and poems and put a shape on the book. You can do that too in cyberspace, but it has more impact in book form. The book appeals to the senses and that’s what the creative arts are all about.”

Despite healthy sales this year, O’Connell feels that the book needs to be rebranded. “Some people, when they see the word ‘review’ on the cover, are immediately turned off. They don’t think it has a purpose and regard it as an outdated genre. But what I’d like to stress is that the book has a purpose. There’s a narrative underlying it. It started off as being about the diaspora for the year of the Gathering, but what has emerged is a spiritual vein that runs through the book.”

The current issue of the Cork Literary Review retails at the below-cost price of €15. “There would have been a digital version of the book this year but I wanted to stay with just bringing out the print book. A digital version is an easy, cheap option. But I think there’s an audience for an artefact.”

Print will not disappear, says O’Connell. “There will always be room for both print and digital publishing. People thought the bicycle was going to be threatened by the motor car but now, the bicycle is making a huge comeback.”

Cork-based writers John Keating and Marc O’Connell also remain committed to the print version of their literary journal, The Penny Dreadful, the second issue of which was published recently.

The publication came about by accident as the two men were bemoaning the difficulty of sitting down to practise their craft. They agreed they would each write a story, then photocopy and staple them together in what would be an anonymous pamphlet that they would deposit in coffee shops, libraries and other cultural venues. They included an email address for comments.

Keating and O’Connell received a large number of unsolicited submissions, and so the journal was born. The current issue of emerging and established writers includes a poem by Paul Muldoon. This was the result of Keating running into Muldoon in Cork and hanging out with him.

“John gave him a copy of the magazine. Paul liked it and submitted a poem,” says O’Connell. The journal is named after the cheap, serialised publications that were popular in Victorian England. The journal is “a high-minded venture that takes writing seriously but doesn’t take itself seriously”.

The editors are influenced by literary journals such as The Stinging Fly and The Shop. While The Penny Dreadful is available online, the digital version exists to supplement and promote the printed version.

“It acts as a jumping-off point for selling the magazine [which includes original artwork]. We’re committed to print. The magazine is a product that we sell. But we’re not Luddites. We think the online and print version support one another.”

O’Connell doesn’t think print is going to taper off. “People get very angry at the suggestion that books might cease to exist. I think they’ll continue in the way that vinyl has in the music industry. Print may not necessarily be the principal way that people read, because convenience will probably win out. But I don’t think print is ever going away.”

He adds that a book or journal “is an object that you own. It’s a unique thing which you can keep for the rest of your life. A Kindle book doesn’t have the same visceral quality as a printed one.”