Patrick O’Kane: thoughts on acting, Belfast and a head butt

The actor is one of the most intense and intelligent performers in Irish theatre; little surprise, then, that a conversation with him starts to sound like a masterclass on acting 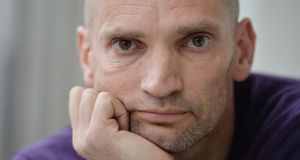 Patrick O’Kane: ‘I find that my perspective on many things is through the prism of being a Belfast man, even though I don’t live there any more.’ Photograph: Alan Betson 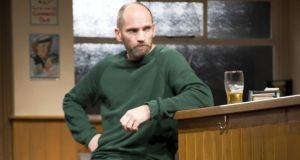 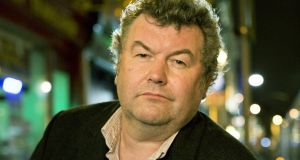 As the photographer frames a shot of Patrick O’Kane, sitting still and unsmiling in the Abbey auditorium, he makes a comment that the actor has probably heard before. “You look pensive.” Bestowed with the naturally furrowed brow and piercing features of someone who seems eternally serious, O’Kane replies with good humour. “I do a bit too much of that. It might look like I’m thinking then.”

Such a presence – coiled and compelling, guarded but with an eruptive force – has given O’Kane a career of fascinating roles on stage and in film. He has been the louche, calculating Christy in Tom Murphy’s The House and a modern, meditative, heavily mediatised Hamlet (both for the Abbey). He has been Macbeth for the Royal Shakespeare Company, Christy Mahon for the Royal National Theatre, John Proctor for the Lyric, and has now originated four roles in Owen McCafferty’s subtly poetic depictions of contemporary Northern Ireland.

Last year, as a fellow of UK innovation charity Nesta, he published a probing collection of interviews with various professional performers, Actors’ Voices , an expansive inquiry into the profession and the art form. Thoughtfulness, onstage and offstage, seems to define him.

Just listen to him describe a single gesture, simple but important, in Owen McCafferty’s 2012 play Quietly , currently touring Ireland in Jimmy Fay’s production for the Abbey. “It’s remarkably eloquent in its ferocity, in its speed and in its physicality,” O’Kane begins, voice low, speech precise. “But also in what it says. Here’s a man [his character, Jimmy, is a Catholic hard chaw] who has stage-managed a situation in response to a request to meet [Ian, an ex-loyalist paramilitary played by Declan Conlon], which he reluctantly accepts. It occurs in the place which resonates most profoundly with the event under discussion [in a bar in Belfast, the scene of a traumatic incident in both men’s past] and in circumstances that will be both private [they are the bar’s only customers] and public simultaneously [they have one witness, a Polish barman, Robert]. And having done all that, when he comes face to face with his nemesis, I suppose, he really doesn’t know what to say or do. It’s a remarkable moment.” We are talking, of all things, about a head butt.

That O’Kane can offer so cerebral an interpretation of such a physical act is as appropriate to McCafferty’s play, a careful dialogue conveyed over a hum of tension, as it is to O’Kane’s craft. The actor, born in Belfast in 1965, grew up against the Troubles, when to be a teenager was to be “a trouble magnet”. In school, he was an all-rounder: he played Gaelic football, handball and soccer, he swam and debated for the school, played piano at recitals, but took a particular pleasure in running.

“At the risk of sounding pretentious, there is something spiritual about it,” he says. “On a good day you get time and space to think, and then you hit a point where you stop thinking. Then it becomes truly meditative.” It also offered another kind of escape. “The streets would be really quiet. Just street lights. And I could run through areas that I wouldn’t dream of walking through during the day. There was a freedom and a neutrality about being a runner, which was really liberating. It was a singular pursuit.”


But not even sport was neutral. When his Catholic school found out that O’Kane had been playing soccer at a Protestant rival, he was banned from all school sports facilities: a petty and particular cruelty. “So much for education broadening the mind,” he recalls. “Nothing dramatic drove me away from Belfast, but it was the insidious nature of sectarianism and the way it infiltrated every aspect of your life and your outlook. That’s the kind of thing that I found unbearable.”

When he left school, in the early 1980s, O’Kane followed friends to work on London building sites, before moving to Manchester University to study drama and English. (He later settled in London, but now lives in tranquil Bournemouth, “God’s waiting room”, with his young family.)

“Increasingly, I find that my perspective on many things is through the prism of being a Belfast man, even though I don’t live there any more,” he says.

He is particularly alert to the status of Belfast stories and Northern Irish narratives, which have not always been readily embraced. In auditions in the UK, he reflects, his accent can meet resistance (“We don’t want that resonance, thanks very much”), which he is keen to challenge: can a Northern Irish accent only tell one story?

In many respects, O’Kane has been part of the changing narrative of Belfast, partly through his long association with McCafferty, whose plays Closing Time , Cold Comfort , Scenes from the Big Picture and now Quietly are more complex than “Troubles theatre”, depicting people and politics either metaphorically or with a much wider, elliptical scope. There is some acerbic mention of “truth and reconciliation” in Quietly , but the play is more engaged with the character of human honesty, what needs to be said and how we might say it.

“I’ve been lucky three, possibly four times over the course of my career, to take part in stories that have a personal resonance for me,” says O’Kane. “In a way, that’s what theatre is all about for me: how we illuminate and enrich both ourselves as artists and our audiences by telling stories for us and to us. What’s great about this play is it is a tale of ordinary folk. It’s how people on the ground are working it out on their own terms, because there is no genuine leadership from the top. That’s why it’s called Quietly . People are having to go into quiet corners of pubs and sort it out for themselves.”

He reserves particular praise for the Abbey’s commitment to the play, which will soon conclude an 11-venue national tour at the Peacock and later visits the Ruhrfestspiele in Germany and undertakes a residency at the Soho Theatre in London. He agrees that bringing Quietly to Belfast’s Lyric Theatre has a special resonance. “Hopefully it will find a positive response and generate further conversations. That’s all you can hope for, really. To prompt more conversation about a subject matter where, unfortunately, there hasn’t been enough talk yet.”


Philosophy as an actor
Being a participant in such conversations comes close to O’Kane’s philosophy as an actor. The title of his book, Actors’ Voices , expresses neatly that actors are creative and collaborative artists. To read it is to recognise a discreet kind of sectarianism within the hierarchy of theatre. In 1997, for instance, when O’Kane “had the temerity to express a desire to participate in my own career”, as he wrote, his agent dropped him. A writer such as McCafferty or a director such as Conall Morrison, both of whom he has worked with steadily, “are confident enough in their own place in the creative collaboration to accept and consider other points of view”.

But it isn’t always so. “Is an actor an artist or merely the conduit, the point of delivery, for another artist’s story?” he asks. “I would suggest, by virtue of the fact that you are an actor and you are curious about many things, that you have a greater part to play in that conversation.”

It doesn’t mean that you have to be right. Working with McCafferty, who directed him in Cold Comfort for Prime Cut, the two hit an impasse when O’Kane believed his character should crumple on the floor before the play’s end and McCafferty disagreed, but couldn’t say why. O’Kane offered point-by-point, beat-by-beat reasoning for his interpretation. “That’s all very eloquent,” said McCafferty, “but actually it’s all post-rationalisation.” O’Kane accepted that it didn’t make intuitive sense and would seem false to an audience. “It became simpler,” he says, “and, of course, having become simpler it became more complex as a theatrical moment. For me, complex is good, complicated is bad.” On the cover of each of O’Kane’s rehearsal scripts, you see the same all-caps instruction: “Keep it simple, stupid!”

Acting, like sport, involves rigorous and careful preparation in order to be responsive to the unpredictable moment – the present-tense transaction, as O’Kane calls it.

“It’s the paradox,” he says. “I can only be spontaneous after I’ve done all my preparation.” That might sound, again, as though he is overthinking it. But to see O’Kane’s Jimmy, frenetic and surprised by his own violent outburst, is to appreciate an actor’s forethought and the ability to transcend thought – the visceral and intelligent effect of an artist using his head.

Quietly is at the Lyric Theatre, Belfast, from tomorrow