Patrick Freyne: Thank you, Stan Lee, for making superheroes just like us

The man behind Spider-Man, Iron Man, Thor, the Incredible Hulk and the Uncanny X-Men made it okay to express your feelings while wearing spandex and fighting evil lizards 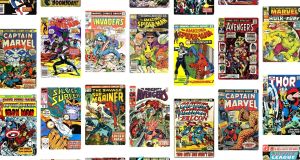 Power for the people: Classic Marvel Comics titles from the 1960s and 1970s. Screengrab via Pinterest

One day, Stan Lee looked out of his window and had an idea.

“I want ensure that the nephews of the future are a bit violent, particularly Patrick’s nephews. I’d like a future where they say things like ‘I’m Thor!’ then jump on his back when he’s not expecting it, or shout ‘Hulk attack!’ and headbutt him in the stomach, winding him, or say, ‘You can be Hawkeye, who has no powers and just a bow and arrow, I want you to cry when I hit you, like a baby, you bow-and-arrow baby.’ Yes, that is my dream,” said Stan Lee, and he went off and wrote a bunch of stories for children that, for reasons to do with both American cultural hegemony and Western decline, dominate culture to this day.

Lee died this week at the age of 95. He was a genius and anyone who likes comics or nephews/nieces should feel a bit sad. By the time of his death, the brilliant/bizarre spandex-clad characters he largely created in a 10-year window in the 1960s had become the bedrock of blockbuster cinema. They both continue to entertain the masses decades after their completion and they provide a much-needed employment programme for hunky men called Chris (I speak, of course, of the Holy Trinity of Hemsworth, Evans and Pratt and not the “false Chris” Chris Pine).

Lee, formerly Stanley Lieber, was a late starter. It wasn’t until he was in his 40s and Timely Comics, where he worked, morphed into Marvel that he invented most of the characters for which he is famous. (This is good news for any of you who want to quit your job at the Central Bank to create superheroes, but are being held back by petty naysayers like your spouse.)

Superhero creation is a funny thing. The big comic book publishers spent a lot of the late 20th century adding random nouns to the word “man” (occasionally “woman”) before flinging garishly coloured homoerotic hunks at eager teens to see what stuck. Lee’s lesser creations, for example, include the tragic Asbestos Man, who is a real comic book character but has somehow not yet appeared in any of the films.

Occasional duds notwithstanding, Lee created an atmosphere at Marvel that allowed it to steal a march on its more uptight, white bread competitor, DC Comics. DC’s Superman, you see, was a bit of a pill. An all-powerful paragon of virtue, he was one-dimensional and no one could relate to him. Lee thought his characters could have a staggering two dimensions and he made sure to add “hokey real-world problem” to the “random noun” and “statement of gender identity” formula. “What if this character was bitten by a radioactive plank, giving him plank powers, but he is also worried about subsidence in his New York apartment?” he’d say, and the teens of America would instantly find Plank Man 10 per cent more relatable. And so Lee and his co-conspirators began churning out such hugely successful characters, that highfalutin intemallecktuals nowadays liken them to the heroes of Greek myth.

Here are some of the big ones:

The Incredible Hulk A hyperbolic green rage-a-holic who got his powers after hapless boffin Bruce Banner wandered too near a nuclear explosion. He is played by Mark Ruffalo in the Avengers movies, who is, I’m told, attractive to some people, but not, thankfully, my wife, who finds him hideous and not at all charming.

The Amazing Spider-Man Co-created with Steve Ditko, the most fantastical thing about Spider-Man nowadays is that he manages to make a living wage as a freelance photojournalist. In the 1960s, Lee’s innovation was to make Peter Parker a lovelorn and bullied schoolboy who secretly fought crime with the powers he gained after being bitten by a radioactive spider. Those powers were not infection and fever, which I imagine would be a more typical response to radioactivity and spiders. Yes, thanks to Stan Lee, a generation of children had unrealistic expectations about what happens when you get bitten or exploded.

Iron Man Tony Stark was an alcoholic multimillionaire who had a road to Damascus moment and decided to make the world a better place.

“What are you going to do Tony? Pay your taxes and lobby for more investment in schools and hospitals?”

Iron Man is the most realistic of the superheroes, really. This is the type of crap rich people do. Check out Elon Musk and that huge robotic crab with which he is currently terrorising France.

The Uncanny X-Men Co-created by Jack Kirby, this bunch of disenfranchised mutants evoked the civil rights movement at the time and later, in the 1990s, became a mirror in which young gay people could see themselves. Marvel comics were only ever gently progressive at best (major characters only really began coming out as gay in recent years) but good stories with a general message of tolerance mean a lot to people when they’re young and vulnerable.

The Mighty Thor Stan Lee went back in time to invent the Norse god Thor and make Vikings worship him. Or maybe he just co-opted the hammer-wielding hunk into the Marvel universe. One way or another, Thor is cool.

Now, there’s a bit of dispute about how much credit Lee actually deserves for some of these creations. Brilliant genre-defining artists like Jack Kirby and Steve Ditko (who went on to create the insane, right-wing, Ayn Rand-influenced Mr A) complained that Lee often swooped in at the last minute to “co-create” pre-existing plots, characters and layouts. “I’ll take any credit that isn’t nailed down,” said the man himself, and this is, after all, the American way. Creators often felt ripped off and insufficiently remunerated. There’s also no doubt that Lee had a vision and that, much like David Frost or Steve Jobs, he was good at marshalling the forces of genius.

In the 1980s, revisionist comic creators tried to make superheroes more “realistic” by giving them sex lives and guns and mental problems. However, this was stupid, because there is nothing particularly realistic about a man dressing in lycra and fighting crime just because an arachnid has bitten him or he has found a magic ring or he has built a suit out of asbestos. So, these comics stayed silly, but they also became cynical and depressing.

Luckily, the cynicism didn’t stick. In more recent years there have been great innovators like G Willow Wilson, Brian K Vaughan, Ryan North and Matt Fraction, who have embraced the beautiful daftness of the world Lee co-created in order to tell stories that somehow manage to be moving, insightful and funny about the real world. The Marvel films take their cues from these writers without quite matching their subtlety.

If there is a problem with Lee’s legacy, it’s that in the world of comic books, and increasingly film, it’s difficult to tell any story now unless it is through the medium of superheroes. Addiction, discrimination, sexism, adolescent angst, whatever the issue, superheroes are the delivery mechanism and it all started with Stan Lee.

On a personal level, I can only open up about my emotions nowadays when dressed in spandex and being punched in the face by a soliloquising nemesis. Stan Lee has had a huge effect on me, and, if the small masked children who belt me with plastic hammers are anything to go by, he will continue to wield an influence. Excelsior!

Love Island: It’s deranged. What am I actually watching?
3

Rob Doyle: ‘Frankly, a lot of my life has been disastrous’
8