Omar Sharif: from desert prince to alone in Paris

The actor lived a glamorous life of fame and fun – now, with his fortune and memory fading, his frustration is palpable 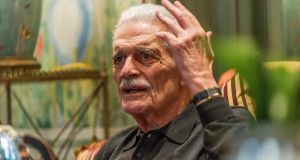 Omar Sharif: ‘When you’re working in films, you find a lady and you flirt with her instead of being bored.’ Photograph: Des Harris/The Picture Desk 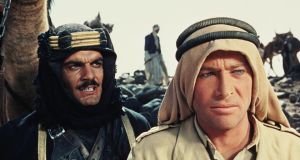 Sharif on Peter O’Toole: ‘I loved him. He was my friend. When he died [last December], I went crazy. After Lawrence of Arabia we made terrible films together’

Many men would envy Omar Sharif. The actor’s portrayal of Sharif Ali, prince of the desert, in David Lean’s Lawrence of Arabia (1962) catapulted him to international fame at the age of 30.

For decades, Sharif enjoyed beautiful women, fast horses, bridge tournaments and gambling. Now he’s shipwrecked by old age, egocentrism and his failing memory, doomed to live out his remaining years in the luxury hotels of Europe.

Sharif, now 82, will be the guest of honour at the opening of the Dublin Arabic Film Festival at the Light House Cinema tonight, where he will present Monsieur Ibrahim, the 2003 film for which he won a French César award. In it, he plays an ageing Turkish Muslim shopkeeper who becomes a surrogate father to a Jewish boy.

Sharif was born in Alexandria, Egypt, to immigrants from Zahle, in Lebanon’s Bekaa Valley. “When I was small, my mother beat me on the backside with a slipper. She sent me to the British boarding school in Egypt because the food was bad and she wanted me to lose weight. She played poker with King Farouk,” he recalls.

Falling for ‘Egypt’s Shirley Temple’
Sharif earned a degree in mathematics and physics at Cairo University, worked briefly in his father’s exotic wood business, and studied at the Royal Academy of Dramatic Art in London. The director Youssef Chahine discovered him in the early 1950s and he was cast opposite Faten Hamama. She was the same age as Sharif, had been a star since childhood and was known as “Egypt’s Shirley Temple”.

Sharif, born Michel Chalhoub, a Greek Melkite Catholic, converted to Islam and changed his name for the love of Hamama. They married and had a son, Tarek.

They were the Arab world’s most celebrated couple, starring together in many films. Everything changed when Sharif went to the Jordanian desert for a year to shoot Lawrence of Arabia, for which he won the Golden Globe for best supporting actor and an Oscar nomination.

Sharif became fast friends with Peter O’Toole, who starred as Lawrence. “I loved him. He was my friend,” says Sharif of O’Toole. “When he died [last December] I went crazy . . . After Lawrence of Arabia we made terrible films together. He said, ‘Let’s make rubbish and have fun’.”

Not since Rudolph Valentino played the lead in The Sheik had millions of western women fantasised about the Arab lover. Sharif signed a seven-year contract with Columbia Pictures and moved to Hollywood. His lead role in Dr Zhivago (1965) reinforced his stature as an international heart-throb. Sharif didn’t want to cheat on Faten Hamama, so he asked for a separation.

“I never loved anyone except her until now,” he says wistfully. “I loved Barbra [Streisand] for three months [when they were shooting Funny Girl in 1968]. She was crazy,” he says. Sharif was cast as the smooth-talking playboy gambler and horse breeder Nick Arnstein – an accurate description of his interests. He says he was ready to convert to Judaism for Streisand, but she refused to leave New York, and he didn’t want to live there.

In the wake of the 1967 Arab-Israeli war, Sharif and Streisand’s public affair angered the Egyptian government. “You think Cairo was upset?” Streisand responded. “You should’ve seen the letter I got from my Aunt Rose.”

There were other affairs, including with the French actor Anouk Aimée, whom Sharif met on the set of Sydney Lumet’s flop The Appointment in 1969. “One month here. One month there,” Sharif says of his love affairs. “When you’re working in films, you find a lady and you flirt with her instead of being bored.”

The battle against boredom is Sharif’s obsession. For years, he haunted casinos, gambling away millions. One night in the 1970s, he lost his Paris duplex apartment.

“Why did I sell it?” he asks Catherine Mareska, his faithful assistant of more than 40 years and his back-up memory now.

“The casino and bad investments,” she whispers back.

“But I always had money. Where did I go?” he asks her.

“To the Trocadero,” she reminds him.

Sharif’s days are all the same now. He sleeps until noon in a luxurious, discreet hotel on the right bank in Paris, bathes, walks for 45 minutes. “I come back here all by myself,” he says. “I know no one. I have no friends in Paris. I want someone to take me to dinner, to take me out in the evenings.”

Mareska explains Sharif’s solitude this way: “When people are superstars, they have 10,000 hangers-on. The moment the lights go out, they’re alone.”

Sharif gave up gambling. “I have eight or nine race horses, but they are not doing well,” he laughs. He no longer goes to the hippodrome, but watches the races on television. “I used to go all the time, when I had a friend to go with me.”

Sharif used to be a champion bridge player. Books, video cassettes and newspaper columns about the game have been published under his name. He plays bridge only once a year now, with old ladies in Deauville in August. “We finish last, but it doesn’t matter,” he says. “I want to make old women happy, and they are.”

Quick to anger
Sharif is known for his mercurial temper. At least three times, he has struck people in public. In the worst incident, he was found guilty of assaulting a parking lot attendant in Beverly Hills in 2007, breaking his nose – for this reason, he no longer travels to the US.

Sharif’s anger sparks when I repeat a question. It explodes a few minutes later when I ask about the illegitimate son he reportedly had with an Italian-Jewish journalist. “Just because it’s my sperm doesn’t mean it’s my child,” he told the French journalist Christophe Ayad in 2001.

It is indescribably sad to see the dashing Arab warrior and romantic Russian poet-doctor of one’s childhood transformed into a grumpy old man.

We are saved by the baby screaming on the other side of the hotel lobby. “Hello my little baby,” Sharif coos, his anger subsiding. “The best thing in the world is a baby, no doubt,” he says. Within moments, he has the infant laughing. Our meeting has been salvaged. Dr Zhivago is happy.

Sharif will attend the opening of the Dublin Arabic Film Festival at the Light House Cinema tonight. Lawrence of Arabia will be screened as part of the festival at the Chester Beatty Library on Saturday, dublinarabicfilmfestival.ie

Kit de Waal: My Irish grandmother was mistress of the stretch
9