Olivia O’Leary: This week, we were the stars of our own show

People who feared the 1916 centenary could be marked by jingoism found instead it enabled people to gather, tell stories and celebrate in the way that meant most to them 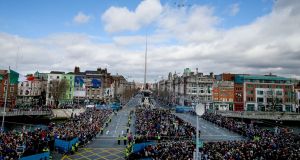 Reclaiming the streets: the Air Corps flying over O’Connell Street in advance of the Easter Sunday commemoration ceremony and parade. Photograph: Maxwells/Getty Images

‘Do you know what?”said my friend. “It was a great day out.” She had put her finger on it. It was a great day out. Indeed it was a great week out. And it was one of those times when people themselves became the occasion. We stepped beyond our own front doors and offices into the big public spaces and made them our own again. Yes, of course there was the impressive scaffolding of ceremony and parades and concerts and talks. But the turnout all over the country made it remarkable. We were the show.

We were the show in O’Connell Street on Monday. Some people dressed up in 1916 garb and came with their children from all over the country to have their pictures taken at the GPO, near the spot where Pearse had read the Proclamation and where the wreaths had been laid the day before. And the street belonged to us, not to buses, cars and lorries. For once, commerce, commercial traffic and private enterprise didn’t banish us to the footpaths. Around the corner in Moore Street, the Ó Raghailligh’s grandson, Prionnsias, talked to the crowd about how his grandfather had died from bullet wounds after withdrawing from a burning GPO and had written the heartbreaking last letter to his wife, which is reproduced on a plaque on the wall.

History was alive and walking around the redbrick buildings of Moore Street, where the GPO rebels made their last stand and where Pearse and Connolly decided to surrender. Minister for Arts Heather Humphreys visited the three houses, which are designated a National Monument. When she left she was heckled by some of the 1916 relatives who had successfully brought a High Court action to preserve even more of the terrace.

But it was fairly good-humoured. It didn’t bother her, or us onlookers. That’s what happens in a shared public space. That’s democracy.

Because there was a time when we couldn’t gather like that. Remember the early 1980s? No, of course you don’t. You’re too young. But I remember when you went nowhere near the centre of the city at weekends because of H Blocks protests, which sometimes ended in rioting, and because of regular Northern loyalist bomb scares and incendiary bombs in the big shops. The atmosphere was threatening. The tricolour had been hijacked by the IRA, and violence in Northern Ireland poisoned the notion of Easter celebrations and caused successive governments to cancel them. And I am not the only person who had deep reservations about this centenary celebration and who felt it had to be seen through the eyes of those 3,500 people who died in the Troubles, the largest group of them killed by Republican violence.

But, in fairness to Humphreys and her team, they managed to avoid most of the worst jingoism and there was a real effort to provide space for people to gather and tell our stories and talk to one another. There were 4,000 people at the reception for relatives of 1916 in the RDS on Saturday. I was there with my cousin Sheila from San Francisco, both of us granddaughters of Edward Dundon, who was O/C of the 4th Battalion Carlow Brigade of the Irish Volunteers.

As a doctor, he had a car and petrol rations and acted as a sort of quartermaster, acquiring and hiding guns and bringing in explosives from Scotland that were used in bombs in the GPO in Easter Week. Knowing he would be arrested,he asked the girl he was going out with to marry him. She said yes and they were married in the afternoon in Borris Church with a borrowed ring. He went on the run, was arrested and ended up in Reading Jail where he shared a cell with Denis McCullough, head of the IRB. He talked endlessly about the girl he had married, how beautiful she was, what a wonderful pianist she was, how he hadn’t even had time to buy her a proper ring.

McCullough, who ran music emporiums in Belfast and Dublin, had probably had his fill of this. And, good Ulster businessman that he was, he suggested my grandfather order her a fine piano as a wedding present. So the Schiedmeyer was ordered from jail in 1916 and I now play it.

I couldn’t bring the piano with me, but other people brought their mementoes to the RDS. A man sitting near me at the concert passed me over a small wirecutters which sat neatly in the palm of my hand. That, he told me was the wirecutters that his father, a telephone engineer, had used to cut the main telecommunications wire between Dublin and London on Easter Monday so that news of the Rising didn’t reach Whitehall for a full six hours. When I handed it back to him, he put it carefully down into his deepest pocket.

All around us, people were exchanging information about archives and websites. A tall man whose father was prominent in the Rising told me that his own son, now a colonel in the Army, would be carrying the Plough and Stars flag in the big parade next day. As he told he how proud he was, he suddenly stopped, overcome by emotion. The concert was grand – a bit too many green ballads for me – but the people who had gathered there with their stories and their pride were the real stars.

And just in case we lost the run of ourselves, in the Abbey that night, after a remarkable new production of O’Casey’s anti-1916 play, The Plough and the Stars, Eileen Walsh, who played Bessie Burgess, stopped the applause. Conscious of the play’s message about the doomed consumptive youngster, Mollser, she told us that the cast were donating their bank holiday special pay to a children’s charity and asking us to contribute too. And we did.

And now we’re back to the real world where today’s Mollsers are homeless, or sleeping in B&Bs or shooting up around the corner from the Abbey and neither equal nor cherished. And what are we going to do, then, if it’s all to mean anything more than a great day out?