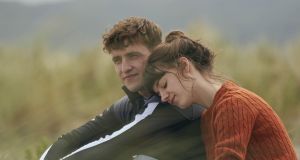 The title of Normal People seems a little more archly ironic than it did previously.

Creative production has its own internal clock, depending on the artform. It’s one of the reasons why popular music down the years has often seemed more attuned than literary fiction or cinema to the immediacy of the particular moment.

The sheer logistics of writing, editing and publishing a mid-length novel, or the even more tortuous process of developing, financing, producing and releasing a filmed drama, inevitably militate against hot takes – which may be for the best. Songs and music seem better attuned to an immediate, visceral reaction, while other forms tend to work better in a reflective or elliptical mode. And the impulse to be relevant can be more of a burden than a blessing.

Art and reportage may sometimes overlap, but that tends to be the exception rather than the rule. Two quite different lockdown experiences this week illustrate the point. Lenny Abrahamson’s adaptation of Sally Rooney’s Normal People was unusually quick in its transition from page to screen (Rooney’s novel was published only 18 months ago). Abrahamson has acknowledged the series barely got across the line before film production across the world shut down, so let’s be grateful for that. It’s a gorgeous piece of work that would be a pleasure to watch at any time, but seen through the lens of the Covid-19 moment it gains a new emotional weight that could hardly have been foreseen.

It was as if Irish contemporary theatre’s much-criticised reliance on the monologue was finally being vindicated in the age of Zoom.

Abrahamson is unusual among Irish filmmakers in his deep consideration of physical spacing between his characters within the frame. His first short, Three Joes, drew on the conventions of silent film and clowning. Adam and Paul, his feature debut, did something similar. In some filmed drama, it’s obvious the words came first and the pictures followed. With Abrahamson, the spatial dynamics between his characters are often charged with emotion and drive the narrative. In the episodes of Normal People I’ve seen so far, he achieves this brilliantly for a drama about distance and intimacy between characters at the exact moment in their lives when such things matter most. Watching it, you’re reminded that, with all due respect to the cocooned, it’s young adults who have lost the most during lockdown – truncated relationships, disrupted education, lives put on hold at the exact moment when, as we know from previous experience, it has the most damaging long-term effect.

All of which, one might think, couldn’t be more different from the short pieces posted online this week by the Abbey Theatre as part of its Dear Ireland project, for which it commissioned 50 writers and 50 performers. Here, the focus is almost exclusively on the words, the voice and the face. Filmed solo for the most part by the performers themselves, the works are a fascinating and rewarding first stab at a first draft of the history through which we are currently living. There was something wonderful about watching them pop up on the Abbey’s livestream (they will be available to replay later). While the work was recorded, the streaming experience to some extent replicates submitting yourself to the perils and pleasures of live performance. With no shortage of fine acting and thought-provoking scripts, it was as if Irish contemporary theatre’s much-criticised reliance on the monologue was finally being vindicated in the age of Zoom.

Dear Ireland has been an exhilarating demonstration of how writers and performers can collectively engaging with the country at a time of profound dislocation. Inevitably, some pieces worked better than others, but many succeeded in touching nerves that no other form of communication has managed so far. Credit is due to the Abbey’s staff and directors, who have experienced their fair share of slings and arrows over the past year, for the remarkable speed and ingenuity they showed in pivoting from a darkened theatre to a credible online platform within the space of a month.

In their own very different ways, these two artistic projects cast light on some essential truths about this pandemic experience. In its intense physicality, finely tuned aesthetic and powerful sense of place, Normal People (the title seems a little more archly ironic than it did previously), looks and feels very different now than it would have three months ago, while Dear Ireland shows how artists are more than capable of bringing a valuable insight to current events. Perhaps it helps that this crisis is having such a particular and unusual effect on all our lives which lends itself to dramatic exploration – isolation, claustrophobia and existential dread are not unusual subjects for fiction and drama. As more than one wag has pointed out, it wasn’t much of a stretch for Enda Walsh to rise to this particular occasion.