Musical chairs: where’s the best place to sit at a concert?

It’s an impossible question: sitting in different parts of a music hall can alter the experience significantly 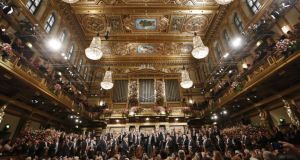 The most celebrated halls set rules of their own, as if there’s something encouraging the music-making. The Musikverein in Vienna (above) has that quality

The view of an orchestra on stage at the National Concert Hall is much better from the main balcony than from downstairs. Upstairs you can see the full physical spread; downstairs, the view is flattened and compressed. But for most of the listeners in the balcony, the clarity and definition of the sound is compromised.

The sense of connection with the performers is great if you’re in one of the rows right in front of the stage. But the orchestral perspective is skewed, with the wind section usually sounding much farther away than it is, and a lot of sound seeming to fly over your head.

The most celebrated and cherished halls effectively set rules of their own, as if there’s something in the air that’s coaxing and cosseting the process of music-making. Venues such as the Concertgebouw in Amsterdam and the large hall of the Musikverein in Vienna have that quality. They both invite and reward the making of music.


A place fit for a king


A couple of years ago, I heard a public interview with one of the architects of King’s Place in London. King’s Place is both an office building (it’s the home of the Guardian newspaper) and an arts centre with galleries and two halls, a 415-seat concert hall, and a more flexible space with about half that capacity. It’s also now home to the London Sinfonietta and the Orchestra of the Age of Enlightenment.

As its developer, the remarkable Peter Millican, has explained: “The concept for Kings Place was to create an architecturally inspiring mixed-use development which would, without recourse to public capital funding, deliver a major new arts centre next to King’s Cross/St Pancras and offer something to the local community.”

One of the questions from the floor at the end of the interview was about the best place to sit, and, unexpectedly, the answer was highly specific. The architect from Dixon Jones professed himself a lover of string quartets, and said for that repertoire his favourite seat in King’s Place was at the centre of the balcony, behind the players.

As luck would have it, I was interviewing the Badke Quartet that day, and going to hear them at King’s Place that evening. My allocated ticket was downstairs, but no one was in the balcony, so I moved up into the sweet spot after the interval. Sure enough, the effect was remarkable. It was as if the sound of the instruments didn’t have to come to me. Instead, I felt as if I were in the middle of the group just as the sound was being made. The experience was even more immersive than sitting beside a string quartet playing in a living room. The generosity of the acoustic made sure of that. The sensation of being so magically engulfed was one I could easily imagine becoming addictive.

The other end of the spectrum can be revealing too, as I discovered when I was about 20 at an amateur orchestral performance of Elgar’s Enigma Variations. There’s no need to explain in detail what the shortcomings of the performance were. Suffice to say it was not properly aligned in any way. The players were not in tune with one another, and they were rarely in exactly the same place in the bar, sometimes drifting apart by a beat or more.

On one level it was all excruciating, but on another it was almost revelatory. It was as if the music were coming to me partly disassembled and the only way I could relate to it was by grabbing its various strands and continually trying to line them up properly in my head, moment by moment. The word “active” hardly describes the concentration of listening that was involved. And my sense of engagement with the music was exceptional, as if I were somehow in the middle of Elgar’s creation and having to hold it all together myself.


A seat with Bach support
The seat I was allocated for the Guinness Choir’s performance of Bach’s St Matthew Passion at St Patrick’s Cathedral in Dublin on Saturday had a somewhat similar effect. I couldn’t have been placed farther forward. The conductor, David Milne, was on my right; most of the soloists just two rows in front; the viola da gamba player, Nicholas Milne, was within an arm’s reach – he was so close that I hardly dared move my head to look at him as he wove through his difficult solos for fear of disturbing him. Musically speaking, I was too close for comfort, too.

Music written for large forces – the St Matthew Passion has two orchestras and two choirs – needs time to settle and blend in the air before reaching the listeners’ ears. As with most of the standard orchestral repertoire, it is like a dish that needs to be set aside for the flavours to mingle. Put it on your plate too soon and everything is still separate.

For me, that sense of separation was pronounced in the Bach, with lots of what you might call choir lag from the massed voices in the distance, the close-by organ continuo always immediate, and the solo voices in spectacularly sharp focus. I was aware that it wasn’t by any means the best of Matthew Passions that I’ve heard, but I did enjoy the gorgeous woodwind-playing, being in such close contact with the impassioned solidity of the mezzo soprano Maria de Moel and the formal reserve of bass James Harrison’s Jesus.

Her programme was mainstream and compact – Haydn’s Sonata in B minor, the six rich piano pieces of Brahms’s Op 118, and Chopin’s Sonata in B minor – and the sense of command was far greater than in her round-two performances at the competition in 2012.

The playing was carefully sculpted, soberly thought-out, and the musical intentions were always clear. What was lacking was a sense of discourse or narrative flow. The style of delivery conveyed an impression of distance between performer and music, as if an essential stage of engagement had been lost in the process of making sure that everything was coming out right.

Brigitte Nielsen on giving birth at 54: ‘I was trying until there were no embryos left’
8