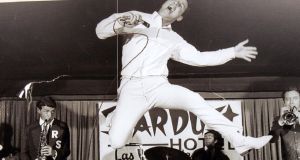 Brendan Bowyer in action at the 2006 exhibition "Hucklebuck Time- a Celebration of the Generation That Danced Their Way into History" at Waterford Museum of Treasures. Photograph of exhibit: Eric Luke

The Hucklebuck. Two words say it all when you think of Brendan Bowyer, the singer and showband star, who has died at home in Las Vegas, aged 81. The song became a dance sensation in Ireland for the man who fronted both The Royal Showband and the Big Eight during the height of the showband era, and had five Irish number ones. Bowyer died on Thursday evening, surrounded by “the unending love” of his wife, Stella, his three children and his two grandchildren.

Brendan Bowyer was born on October 12th, 1938, in Waterford. He began his career with The Royal Showband in 1957 and became a popular vocalist, with a talent for rock’n’roll with an Irish flavour, and energetic stage performances.

The Beatles opened for The Royal Showband in April 1962, at the Pavilion Theatre in Liverpool, six months before they released their first single, Love Me Do.

Three years later he and the Royals made the international dance hit The Hucklebuck hugely popular in Ireland, its frisson of sex and joyous dance enlivening Irish youth culture in the mid-1960s: “Now here’s a dance you should know, oh baby, when the lights are down low. I said grab your baby, then go.” Instructions for the jivey dance are in the lyrics: “Push your baby out (yeah), and then you hunch her back (yeah), start a little movement in your sacroiliac, wiggle like a snake, waddle like a duck, that’s what you do when you do the hucklebuck.”

Bowyer and his fellow singer Tom Dunphy left The Royal Showband in 1971 and formed the Big Eight, playing the Irish ballroom circuit in the summer and Las Vegas in the winter, before the band moved full time to Nevada. Bowyer lived in Las Vegas for the rest of his life, with frequent trips home to Ireland.

An Elvis impersonator, he made the Irish charts in 1977 with his tribute Thank You Elvis. Presley was, in return, a fan of Bowyer and The Royal Showband’s performances, reportedly going to his concerts at the Stardust Resort and Casino in the American city in the 1970s. After hearing Bowyer sing it, Presley recorded his own version of You Gave Me a Mountain; one of Bowyer’s greatest recorded performances was the Elvis-associated The Wonder of You.

After semi-retirement, Bowyer returned to touring Ireland each year with his daughter, Aisling Bowyer, and a six-piece band, performing his showband hits, dance music and contemporary songs. He released a covers album, Follow On, in 2001, that included more recent Irish hits, such as Summer in Dublin, What’s Another Year, Past the Point of Rescue and I Don’t Like Mondays. Father and daughter headlined at the Tall Ships festival in Waterford in 2005, and he starred in the Ireland’s Showbands: Do You Come Here Often? concert series.

Ronan Collins, who performed on showband tribute tours with Bowyer, played his songs on his RTÉ Radio 1 show on Friday, and an online book of condolences was opened for him in Waterford.

Bowyer’s family confirmed news of his death on Facebook on Friday morning, saying he had been hoping to get back to Ireland one last time. “It is with deep sadness and regret that we announce the passing of Brendan Bowyer,” they wrote. “Ireland’s most beloved international entertainer for 62 years. Brendan passed away peacefully in Las Vegas on the late evening of May 28, 2020. He was surrounded by the unending love of his wife of 53 years, Stella, his three children, Brendan Jr, Aisling, Clodagh, and his two grandchildren, Liam & Nora Stella.”

Stephen Travers, the former Miami Showband member, tweeted on Friday: “The king is dead: Brendan Bowyer was, and always will be, king of the showband era, when more Irish musicians were in full-time employment than ever before or since and could draw crowds of two to three thousand people a night.”