Where traditional and classical music come together 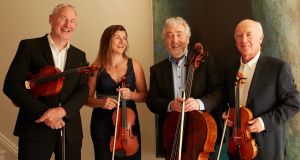 A landscape can shape the music of a people. And music can shape the landscape of the mind, offering solace and meaning in these challenging times. Releasing their first album in seven years, The West Ocean String Quartet are still doing something that was unusual 21 years ago when they first came together: finding the space where traditional and classical musical forms can coalesce.

Atlantic Edge is an album that celebrates the majesty of our west coast, mining its geographical and musical landscape.

“There was a quiet yearning among us to explore some of the gorgeous airs and dance tunes which we knew and loved since childhood,” explains Seamus McGuire, a violinist and much-revered traditional fiddle player from Sligo. “We had never actually played them in a string quartet setting. A yearning to explore this gorgeous material from the west coast of Ireland. And also to celebrate our 21st birthday. It didn’t work out exactly as planned, but the idea of celebrating it with an album and tour appealed to us all.”

With their tour shelved, The West Ocean String Quartet is relieved to have their album released: taking delivery of the physical copies two days before lockdown. Relieved too that the Arts Council, which had funded the tour, honoured its commitment to the project nonetheless. Careers in traditional music are precarious enough without the added shock of a pandemic to wipe out the modest financial supports that enable musicians undertake adventures of the imagination such as this.

Atlantic Edge trains a wide angle lens on the music of the west coast, from Kerry to Donegal. Arrangements were all undertaken by Neil Martin, a musician who has long straddled the worlds of classical and traditional music through his playing of cello and pipes. His companions, McGuire, Kenneth Rice and Niamh Crowley are no slouches either when it comes to musical adventure. Their past itineraries have led them on a merry dance through such diverse ensembles as Engine Alley, The Nuevo Tango Quartet, Camerata Ireland, Buttons and Bows and The Irish Chamber Orchestra.

Now that he’s retired from his day job as a paediatrician, McGuire found himself itching to reset the quartet’s compass in time for their coming of age.

“I had been dropping hints to Neil about doing an arrangement of one of my most beloved airs, Aisling Gheal,” McGuire recalls, “and he didn’t take any convincing, because he loves it too. I’m very closely involved with Sligo fiddle music and I love music from Clare, so the whole idea of an album with the west of Ireland theme running through it gradually emerged.”

Atlantic Edge swoops and soars, diving deep beneath the skin of such magisterial airs as Aisling Gheal and Port na bPúcaí, while still leaving plenty of room for the raffishness that they found in The March of the Mín an Tóiteáin Bull, an errant Donegal bull. Lore has it that when the bull gave chase to local piper, he managed to placate it by playing a tune on the pipes. This waggish tale is effortlessly paired with a delicate Donegal song, Níon a’Bhaollaigh (Boyle’s daughter), opening the album in a heady spirit of adventure and nonchalance.

Martin sees the vast spectrum of music in our tradition as an adventure to be explored, knowing that each of his Quartet companions will bring something very particular to their treatment of the chosen tunes.

“Going back 20-odd years ago, we were stretching out our arms, reaching for colour and air, and what might best work for the individuals involved in the Quartet,” Martin muses.

“For me, that’s the key: writing bespoke music for individuals and writing to their strengths. If we were to interchange Niamh and Seamus’s parts, it wouldn’t work as well because Seamus’s forte is where he is and Niamh’s forte is where she is. It was years of fine tuning so that I wrote to those strengths. I hope my own arrangement skills developed over the years as well. This album harmonically is more adventurous that we would have been 20 years ago: that’s just part of growing up, working at your craft and pushing out the edges of it here and there, all the while retaining a great respect for these beautiful tunes, so lovingly crafted by so many people over so many years, the vast majority of whom we will never know.”

Doffing their caps “to all of those musicians and composers, the mostly anonymous creators of this wealth”, the West Ocean String Quartet is intent on acknowledging the incredible debt they are owed. Those who worked hard crafting and shaping these tunes have left a priceless legacy and their tunes step up readily to the challenge of invigorating arrangements on Atlantic Edge.

Martin sees that as the touchstone on which the album rests. Having revealed much newly composed material in their previous four albums, this time round their appetite turned to the tunes that have been knit into the fabric of our tradition for generations. The challenge was to find their own voice amid all the riches they had inherited.

“It’s a meas, a great respect that we all share,” Martin says. “I wanted to be loyal to what they did and yet at the same time, there was no point in regurgitating stuff that’s been done exactly like this for a long time. You need to bring your own colour to things.

“As long as people are engaging with music, parameters need to be pushed all the time,” he continues. “No music form stays exactly the same. Anything that remains without development becomes stagnant. We just have to keep moving.”

There’s also a poignant acknowledgment of the contributions of two iconic figures in the tradition who recently passed away: Liam O’Flynn and Micheál Ó Suilleabháin. Martin chose Slán le Máigh to remember Ó Suilleabháin, and composed The Boy in the Glen in Homage to the Great Piper, O’Flynn, in remembrance of his childhood summer trips in the sidecar of his father’s motorbike to west Kerry. En route the family would stop at Gleann na nGealt, a place 0f wonder in the imagination of the young Liam.

“What struck me in the last months of Liam’s life was that he was relaxed,” Martin recounts. “He was reflecting over those early days of his childhood and he said that those were the happiest days of his life. And his eyes were dancing, even though he was dying. There was this great dichotomy of emotion. This glorious man, a friend of 30 years. We knew it was only a matter of time, but to see his eyes dancing with genuine excitement and happiness moved me to write that piece of music.

“It was so important that Liam got to hear it. I didn’t want this to be a retrospective piece of music that marked his passing. We arranged that Paddy would play the tune for Liam, and at the end, you hear Liam saying ‘good man’. So Liam got to hear it. That meant a great deal to me.”

McGuire smiles as he recalls the recording of the tune.

“Neil asked us when we were recording this tune to try hard to capture this sense of wonder that Liam felt when he was looking at Gleann na nGealt. That was a very interesting direction to get from the composer. One of the great joys I get from playing with the String Quartet is playing with the composer who is part of the Quartet: it’s very meaningful.”

Atlantic Edge may offer some respite from the turmoil of the current pandemic, Martin hopes.

“At times of crisis like this, many find a sense of comfort and sustenance in connecting with the arts, including the music and song of our forebears,” he suggests. “It’s as if the ancient music of our ancestors provides something akin to a comfort blanket, giving us a sense of security in troubled times.

“Music and the arts don’t exist in an hermetically sealed unit – the outside world has the most profound influence on creation and performance. We know that when this pandemic eventually quietens and performances begin again, that our playing of much of this music will carry a different significance for both ourselves and our audiences. We hope in the meantime that our recording of this music may bring some comfort.”