What went wrong for us at Eurovision? 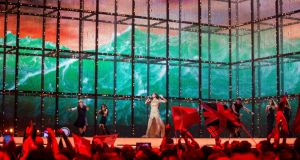 It’s time for Ireland to tear up its Eurovision Song Contest rule book. The failure of our song Heartbeat to qualify for tonight’s Eurovision final was particularly disappointing, but (with the exception of Jedward’s 2011 eighth-place finish), the country has been in Eurovisual freefall since at least 2007. If RTÉ hopes for future success in the contest, we need to consider what has been going wrong, and contemplate new approaches.

Certainly, the last two years have shown that going the ersatz Celtic route is a dead end. It is surprising that after Only Love Survives, with its shirtless bodhrán players, finished in last place last year that a similarly styled act was chosen for 2014. RTÉ’s Eurovision head of delegation Michael Kealy points out that Eurovision acts need distinctive elements that they can “stand out and be remembered”, and suggests Celtic styles and sounds are Ireland’s unique selling proposition. The problem is, though, that they don’t sell – at least given how they’ve been watered down and presented in our last two Eurovision acts.

A central problem lies in the current selection process: the one-night Eurosong competition in which the public votes on acts crafted by RTÉ-chosen mentors. This has resulted in performances which have not proved appealing to European voters and expert juries. Nor are these acts representative of the wealth and variety of musical talent in Ireland.

“In terms of composers and mentors, and to some extent performers, [Eurosong has] the same names and faces every year,” said Eurovision betting expert Daniel Gould, co-editor of Sofabet.com. “There’s a desperate lack of variety.”

One solution would be for RTÉ to handle the selection of acts internally. After several years of using a Eurosong-like selection contest, with poor results, the BBC switched to internal selection, but in 2012 and 2013 chose veteran performers who scored poorly. This year, the BBC announced its intention to offer up a youthful act in keeping with current musical trends, and the result – the unknown Molly Smitten-Downes is currently sitting in the bookmakers’ fifth place out of tonight’s 25 finalists.

Does RTÉ want to win Eurovision? Given the current state of the Irish economy, probably not. But qualification for the final must surely be a goal, in order to secure viewers and advertising revenue. And however much some might like to disdain Eurovision, it is not good for the nation’s image to represent itself poorly on a major European cultural platform year after year.

Next year marks the 50th anniversary of Ireland’s Eurovision participation. How will it celebrate its legacy as the most successful country in Eurovision history? The answer is in RTÉ’s hands.