Speculation mounting that Ed Sheeran will play three concerts in 2018 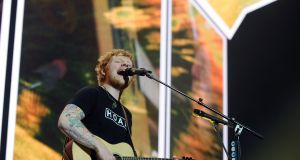 Speculation is mounting that music’s man of the moment Ed Sheeran will play three concerts in Dublin’s Croke Park in 2018. The rumours spread quickly this morning as a betting company announced it was suspending bets on Sheeran playing at the GAA headquarters next year. The company cited a suspicious bet on Thursday of €200, which backed the singer-songwriter to play three shows at Croke Park next year at odds of 9/2.

Concert promoter MCD, which staged Sheeran’s most recent gigs in Ireland, has declined to comment.

However, Liam Glynn, a BoyleSports spokesman, was happy to speculate: “It now looks likely that Ed has already been booked for Croke Park in 2018 and after laying a bet of €200 in one of our Dublin City Centre shops on Thursday our traders have had no choice but to suspend the betting ... A bet of €200 is rather large for this type of novelty betting.”

Whether the reported €200 bet by supposedly “someone who knows more than we do about Croke Park’s concert arrangements” is as significant as the spokesman suggests is open to argument. What is less arguable is that the people getting the most publicity out of the Ed Sheeran for Croke Park 2018 rumours are the bookmakers themselves.

A more reliable source for the rumours might be Sheeran himself. Speaking in February of this year he predicted that last week’s 3 Arena shows were a form of warm-up for a return to Croke Park. “Me playing the 3Arena isn’t going to be a shit gig by any stretch of the imagination, it’s going to be very good. But I didn’t want to go straight into Croke Park, I want to lay the groundwork before going into it.”

With his colossal record sales and massive following, Sheeran would have no difficulty selling out three shows at Croke Park. He attracted rave reviews for a previous show in the venue in July of 2015, when he played in front of an 80,000 crowd.

Following the debacle over a desired five Croke Park shows for Garth Brooks in 2014, the venue is now restricted to staging only three music shows a year.

Just last week Sheeran sold out two shows at Dublin’s 3Arena with some tickets fetching ten times their face value such was the demand to see him.

Sheeran’s new album, ÷ (Divide), released in March has become one of the fastest selling records of recent times. It includes the song Galway Girl, which is set in Ireland. With grandparents from Gorey, Co Wexford, Sheeran had an affinity with this country and spends a lot of his down time in the country.