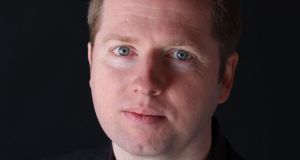 Ian Wilson: his interesting writing for strings was constantly supplanted by the jazz trio and its improvised solos

A composer put this twist on the classic question – what is music? – at a public interview during the Kilkenny Arts Festival. It was the American Michael Gordon, and he was suggesting that music had moved on in the 60 years since John Cage silenced the performers so that random, ambient sounds would emerge as music in his famous 4’33”.

“So are all sounds equal?” Gordon asked. “Or do we need to give different values, say, for the sounds in a Brahms symphony and for the sounds that drift in through an open window? Because if all sounds have an equal value, so that any sound can be music, then what isn’t music?”

These interesting observations echoed during the Crash Ensemble’s premiere performance of Gordon’s festival commission, Dry, inspired by the subtle beauties of the desert and infused with a kind of Morse code minimalism.

Whether you approach it from the perspective of what it is or what it isn’t, music is notoriously hard to define. The angle I found myself chewing on over five days at the Kilkenny festival had to do with whether music always featured fusion of one kind or another.

Fusion front and centre
Fusion was front and centre and worked well in extracts from Roger Doyle’s as-yet-unfinished first opera, The Death by Fire of Giordano Bruno. It tells the true story of the 16th-century monk and intellectual who, like his near-contemporary Galileo, published ideas about the universe that were contrary to Catholic teaching. He was consequently tried as a heretic and burnt at the stake by the Inquisition.

Opera, of course, is an art form already full of fusion – joining music, words, movement, drama, visual design and so on – but Doyle additionally melds together taped electronic music with the voices and live instrumental music. In this way he emphasises the 400-year gap between the original story and his retelling of it.

The full opera – with libretto by Jocelyn Clarke and directed by Eric Fraad – is due for completion in 2015. It presents its opposing sides in black-and-white terms, relentlessly lampooning the church while depicting Giordano, sung by tenor Julian Podger, as a straightforward hero-martyr. The rest of the small cast fill multiple roles, with versatile tenor/counter-tenor Morgan Crowley, for example, appearing as the king of France, the cardinal who leads the trial, and finally a vision of James Joyce (Giordano features in Finnegans Wake).

Falling between stools
One of the hazards with fusion is that it sets up stools between which things can fall. This was what came to mind during The Hours, Ian Wilson’s “jazz triple concerto” for string quartet and jazz trio.

The components remained defiantly separate, unfused, like oil and water, and were mutually distracting, with Wilson’s interesting writing for strings (played by the ConTempo String Quartet) constantly supplanted by the jazz trio and its improvised solos.

There was misdirection, too, between the Latin subtitles of the work’s seven movements – based on the seven prayer times of the Catholic Liturgy of the Hours – and Wilson’s assertion that he was only making use of the seven-part structure with no intention of responding to the prayers.

Setting words to music is a clear-cut case of artistic fusion. This was illustrated by soprano Claudia Boyle, who opened Saturday night’s concert with a string of songs and operatic arias in which she equally fulfilled the composers’ dual purposes of responding to the words while also providing a vehicle for virtuosic display.

It was American soprano Dawn Upshaw, however, who took this kind of fusion to the highest level. She did it on two occasions, first in her own recital with pianist Gilbert Kalish in St Canice’s Cathedral last Wednesday night. What jumped out initially was the eclectic and off-the-beaten-path nature of her programme, which opened with Charles Ives and continued, after a brief detour into Schubert, with Bartók, Ravel and William Bolcom.

Every song was a gem of understanding and communication, as well as of beauty of sound and expression. Even in the Schubert, the evening’s only really mainstream repertoire, Upshaw deployed the enduringly youthful quality of her voice to explore the theme of lost love as though happening live, to a young woman, as opposed to being reflected on later in maturity. It intensified the communication and made it immediate.

This was fusion entirely present but entirely invisible, the listener unaware of the fusing of elements and instead experiencing them as a single thing. Upshaw repeated this two nights later in her appearance with the Crash Ensemble under Alan Pierson, reprising Donnacha Dennehy’s That the Night Come, his settings of poems by Yeats that Dennehy composed for her in 2010. Once again she sold what she was singing, inhabiting Yeats’s deep human concerns surrounding love, longing, the passing of time, and death, which so fruitfully resonated with Dennehy.

The fusion of words and music was less successful in the performance of Orff’s Carmina Burana by the Kilkenny Arts Festival Choir under Fergus Sheil. Surprisingly, the words – which are so interesting and unusual and which so powerfully inspired the composer – were not provided in the printed programme, which you couldn’t read anyway because the lights were turned off, show-style. It means someone missed the point entirely.

The choir, which comes together for just a week of rehearsals, was more valiant than equal to the demands of the music. That said, the choir perhaps has a value for the Kilkenny festival that goes beyond any given performance. Baritone Mark Holland upstaged everyone with the intensely animated delivery of his Latin lines.

Has Britney Spears really been judged incompetent to vote?
7