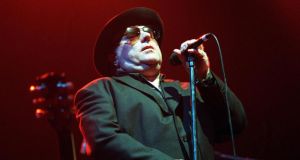 Van Morrison: ‘I’m not telling people what to do or think, the government is doing a great job of that already.’ Photograph: Terry Thorp

Van Morrison has claimed that the UK government is using Covid-19 restrictions to “enslave” the population in three new anti-lockdown protest songs.

The Northern Ireland musician accused the government of “taking our freedom” and claims that scientists are “making up crooked facts” as a mean of controlling the public.

He makes these claims in three new songs recorded “recently” in Belfast and England, one of which bears the title, No More Lockdown.

The BBC reports that the song’s lyrics include the lines:

“No more taking of our freedom / And our God given rights / Pretending it’s for our safety / When it’s really to enslave”.

In another of the tracks he sings: “The new normal, is not normal / We were born to be free”.

Last month, Morrison called on people to denounced the supposed “pseudoscience” around coronavirus and “speak up”.

“ I call on my fellow singers, musicians, writers, producers, promoters and others in the industry to fight with me on this. Come forward, stand up, fight the pseudo-science and speak up,” he posted on his website.

This comes after the musician played a number of socially-distanced gigs and he has said that he believes these types of show not to be viable.

The new anti-lockdown songs are scheduled to be released at two-week intervals with the first, Born To Be Free, arriving on September 25th.

In a statement Morrison said: “I’m not telling people what to do or think, the government is doing a great job of that already. It’s about freedom of choice, I believe people should have the right to think for themselves.”