U2 have announced a 30 year anniversary tour of their seminal album, The Joshua Tree. Video: U2 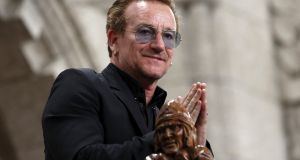 The Irish date - at Croke Park on Saturday July 22nd - brings Bono and U2 back to the same venue where they played the then just-released album live 30 years ago. Photograph: Chris Wattie/Reuters

U2 have confirmed their Joshua Tree 2017 stadium tour.

The Irish date - at Croke Park on Saturday July 22nd - brings them back to the same venue where they played the then just-released album live 30 years ago.

“It’s going to be a great night in Dublin,” says Bono. “Croke Park is where the album was born 30 years ago”.

As predicted, this 30th anniversary tour begins in Vancouver on May 12th (also where they started their last Songs of Innocence and Experience tour) before taking in a number of US dates in May and June before moving to London’s Twickenham Stadium on July 8th.

There is only one Croke Park concert listed at present but it is expected - given the rush on ticket sales - that at least one more will be added in the next few days or weeks. Noel Gallagher will be the support act on the European dates.

“It seems like we have come full circle from when The Joshua Tree songs were originally written, with global upheaval, extreme right wing politics and some fundamental human rights at risk,” says The Edge.

“To celebrate the album - as these songs seem so relevant and prescient of these times too - we decided to do these shows, it feels right for now. We’re looking forward to it.”

Bono added: “”Recently I listened back to The Joshua Tree for the first time in nearly 30 years. It’s quite an opera. A lot of emotions which feel strangely current, love, loss, broken dreams, seeking oblivion, polarisation… all the greats... I’ve sung some of these songs a lot… but never all of them. I’m up for it, if our audience is as excited as we are.”

Bandmate Adam Clayton said the decision to hold the 30th anniversary tour was influenced by recent world events and the election of Donald Trump as president of the United States which has led to “more desperate times”. In 1987, when U2 released The Joshua Tree, Thatcher and Regan were in power with “some very dark forces at work”, Clayton told RTÉ 1’s Ryan Tubridy Show.

“...in some ways we’re right back there at that moment. It’s very hard to predict what the current US president is going to produce but the signs don’t look good.

“It’s a very divided America at the moment. It’s a fascinating but frightening time for the world; the ascendency of Russia and the potential relationship between Putin and Trump. And of course what is happening in the Middle East with Isis.”

“We feel those songs are relevant again. We feel there’s unfinished business to bring those songs back out again.”

Speaking from his home in Rathfarnham where the band recorded The Joshua Tree three decades ago, Clayton referenced the growing fear and uncertainty worldwide which motivated the group to revisit the music and album which “changed our lives”.

“I think it’s fair to say that the process of democracy that has brought Donald Trump to the presidency seems flawed. We naturally would have been democratic in our views. It was more the way Donald Trump was conducting his campaign; he was threatening the press, he was threatening journalists, he was advocating violence on people that didn’t agree with him and he wasn’t prepared to show transparency as regards to his own tax returns.”

“All these things added up to a situation where you questioned whether he really is the right person to lead the country and whether he actually represents the constituency that he claims to represent.”

While Clayton described the invitation from US president Barack Obama to speak at his inauguration eight years ago as “an extraordinary privilege”, he said it was “unlikely” the band would work with the incoming White House administration.

The band has decided to put its Songs of Experience album on hold until the end of 2017 in favour of focusing on The Joshua Tree tour in the coming months.

“In light of what’s happened in the election, we started to look at the songs and where they were going, what they were were saying and thought this could look very strange if we put this record out at the beginning of the year and haven’t taken note of what happened. We want to hold the record back till the end of the year. ”

Tickets for U2: The Joshua Tree Tour 2017 go on sale on Monday, January 16th in Ireland, the UK and Europe and on Tuesday, January 17th in the US and Canada.