Traditional authenticism bound by music and running with time

In ‘Edge of Light’, four top traditional artists perform along the rim of a fresh Irish day 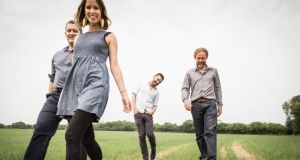 Early birds might already know this: the sun rises in Dunsink Observatory some 25 minutes and 21 seconds (precisely) after it peeps over the horizon in Greenwich. So what we call Greenwich Mean Time is merely a convenience, imposed upon us by Britain in 1916, when matters of public transport timetables held greater sway than the sensibilities of rebellious Irish folk.

Colin Dunne has being working on improvisation since leaving Riverdance. “I wanted to get away from that big sound of traditional music and dance, because as a dancer, I always had a slight feeling of battling that sound,” he says. Dunne is fresh off a plane from Paris, where he spent the summer studying French intensively.

“I’ve had that feeling of having to really bang it out in order to be heard, so that the qualities of softness and lightness that I love so much didn’t gel. But a project like Edges of Light allows the creative process for the four of us to start with a blank sheet. And for the dance to be considered right from the beginning, rather than writing some music and then saying ‘let’s get a dancer to dance on top of this’.”

That clean slate is where Dunne is most comfortable these days. “At this stage of my life, I feel more authentic when I’m improvising. I’m less and less interested in going through the torture of setting steps, particularly when I’m in shoes, because I think in shoes you’re largely concerned with the sounds, rhythmical patterns or phrasing that’s guiding everything.

“I feel like I end up going around in circles,” he says. “And I think: Why would I choose whether I’m going to put my right foot down, or my left? It would be like a drummer choreographing which hand he’s going to play with at each fraction of a second.

“So whether I’m devising a solo piece of work or collaborating with these fantastic musicians, improvisation is a huge part of discovering what the piece will be.”

Solo, Dunne has been working with other media (film and sound technology) to the point that he’s much less concerned about the steps themselves than with discovering what the framework is for a piece he is developing. It’s not so much about choreographing steps.

“If you think about the essence of Irish dance being ‘to dance the tune’, I used to feel very limited in the possibilities for going against that, or pulling away from the tune,” Dunne says. “But I wanted to figure out when to give the tune more space; how to be independent of the tune, and then to pull back close to it again. I don’t really know what the process is, when I’m improvising, but I guess it’s led by a sense of play.

“It’s a complicated thing: trying to figure out what’s going on in the brain and the legs and the body at the same time.”

Feel it in your bones

Hot on the heels of his recent experience as a presenter on Fleadh TV, Clare fiddler Tola Custy makes no secret of his weakness for seeking out those “wink and elbow moments” when the music seeps into your bones.

“From the moment we first sat down together, it was really, really good,” he says. “We wrote a piece of music in an hour and a half. Everyone’s drawn to the open moments of creativity in this group. We have 70 minutes of some very traditional, some brand new and some audiovisual moments.”

Wary of tethering what is a fresh, cohesive piece of work into any kind of linear representation of time as a concept, Custy was happy that the theme served as a springboard rather than a constraint for the four artists.

“It built a focus for us on some of the daftness of Ireland, and we have many daft moments. When Greenwich Mean Time was introduced, people got really upset. Countess Markievicz went off on an awful rant, and branded it a German idea. But in all honesty, the notion stirred us, and set us off on paths we never imagined.”

For Dunne, Edges of Light has proven to be the ideal opportunity for him to return to traditional music, a form he had distanced himself from.

“I feel like I’d put it to one side,” he says. “Any time I worked with traditional music in the studio, it brought out the normal patterns and associations for me, and I was working hard to try to find some independence from the music and from the traditional music community – and from my own past. I needed to find a fresh sense of physicality for myself, so that I wasn’t bound by the music.

“As a traditional dancer, you often have that urge to really fill each part of the music, and to keep putting a foot down and lifting the other one up, and to keep creating sound. But working with delays, they allow me to stop but for the sound to continue in the space. To playfully work with the sound of myself.

“I hadn’t worked a lot with the music technology, with live musicians, so it was really nice to bring it in, and it felt quite fitting in terms of the theme as well. With being in sync with myself, and with one another.”