Thurston Moore: ‘Like Sonic Youth jamming with My Bloody Valentine’ 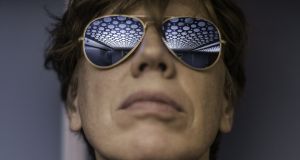 ‘We’ve a strong connection to Ireland because Deb Googe is in the band and Kevin Shields and his family are Irish,’ says Thurston Moore

In addition to co-authoring 16 albums as the tall and talismanic guitarist and co-vocalist in Sonic Youth, Thurston Joseph Moore has been consistently knee-deep in other projects, including several books, a collection of poetry and lyrics, countless collaborations and compilations, and five solo studio albums, to mention just a few.

The latest addition to the Moore canon, Rock’n’Roll Consciousness, sees Moore fire on all cylinders with an alternative all-star band featuring old Sonic Youth bandmate Steve Shelley on drums, Debbie Googe of My Bloody Valentine on bass and James Sedwards of Nøught and Chrome Hoof on guitar.

“I had a very clear idea of a sound for this record that it was to be like Sonic Youth jamming with My Bloody Valentine,” Moore says. “But obviously, I didn’t say that to anybody. Steve and Deb locked in together like two pit bulls pulling at a steak. It was instantly recognisable that it was going to work. This record is after three-plus years of touring, being together and actually becoming family. I really wanted to focus on the sheer pleasure of that.”

Rock’n’Roll Consciousness was recorded in Church studios in north London by Paul Epworth, the multi-Grammy-winning producer. Epworth has worked with some of the biggest artists in the world today, including U2, Coldplay and Rihanna.

“I didn’t really know who he was, although I’m certainly aware of the people he’s produced,” Moore says. “I love Adele and I know who all these big-time musicians are, but I don’t have much of a relationship to that scene. I wasn’t judging it on what he’d done so much, but completely on the fact that we share the same birthday [July 25th], although I’m older. I phoned Paul and went to his studio. He was very genuine and generous and showed me this amazing room, which is one of the most remarkable recording rooms I’ve ever seen. He knew where to step in, and also when to step out, so I’d go back there in a heartbeat.”

Moore has often stuck his head above the parapet over the years to offer his political opinion. Sonic Youth’s Youth Against Fascism in 1992 was a direct response to the first Gulf war and then president George Bush snr, with its scathing lyrics: “Yeah, the president sucks, he’s a war pig f***.” Other lyrics such as: “You got a stupid man, You got a Ku Klux Klan”, have an added resonance and potency in the cold light of recent times. However, Moore sees some reasons to be cheerful.

“What is hopeful is that there is now an opposition that is very functional and vibrant. People of a more left-wing and progressive world view aren’t really interested in power per se, but peace and justice and keeping power in check. It’s all cycles and right now we’re in a heinous cycle of populism and nationalism and swindling the working class with paranoia about other cultures and creeds. This record was recorded before any of this and it isn’t really focusing on that, but I like the fact it comes out in April 2017. It could’ve came out last year and it got put back. Brexit had already happened but the US presidential election hadn’t.”

Moore now calls London home. Although Sonic Youth were viewed as the archetypal New York band, Moore was born in Florida and raised in Connecticut. He dropped out of Western Connecticut State University and moved to East 13th Street, between Avenues A and B, in Manhattan, in 1976. In 2011 he moved to London after Sonic Youth called it a day.

It’s the policies of joy and silliness, and I think it’s a really strong politic

“The lifestyle of someone who makes art and plays music is constantly transient, so I don’t like calling myself with one nationalist identity,” Moore says of living in the British capital. “If anything, I’m promoting the blurring of borders and boundaries. It doesn’t really affect me, but I know it does in one way. All I can do is join the forces of opposition, and I’m happy to do that. It’s the policies of joy and silliness, and I think it’s a really strong politic.”

Moore also separated from Kim Gordon, Sonic Youth’s bassist and his wife of 27 years. She wrote candidly about the breakdown of their marriage in her memoir, Girl in a Band. “It was somewhat inglorious so I understand why people got upset over it,” Moore says. “In terms of Sonic Youth splitting, it was never official. We just ceased activity. There wasn’t any newsletter about it or anything like that.”

Could Sonic Youth ever reform? “Well, if there’s any offers I’ve never seen them,” Moore says, laughing. “I think Sonic Youth had an extraordinary long run. I don’t feel like anything was left unsaid. Our last album The Eternal (2009) was as solid a statement as it could be in terms of a final recording by a band. I’m far more excited in moving forward with this group. I don’t feel Sonic Youth’s career was in any way under-represented or undocumented. It fulfilled its promise and went beyond that. I don’t lose sleep over those aspects because they just don’t exist. In terms of getting back together again, I don’t really consider it and I don’t see a reason why, apart from creating a sensation.”

Sonic Youth played many Irish shows, including two legendary appearances with a then-unheard-of Nirvana in Sir Henry’s in Cork and the Top Hat in Dún Laoghaire, Co Dublin, which are the Irish 1990s indie kid equivalent of being in the GPO in 1916. Does he plan to play in Ireland with his new band? “I really hope so and there’s no reason not to,” he says. “We’ve a strong connection to Ireland because Deb Googe is in the band and Kevin Shields and his family are Irish. I think I have some Irish blood on my mother’s side of the family. Let’s face it, I was a freckle-faced, red-headed kid.”

You could sense that the crowd loved Nirvana, but I don’t think anybody had the realisation that they’d become a game-changer

Moore has very fond memories of playing in Ireland with Nirvana a few short weeks before the release of Smells Like Teen Spirit changed everything. “You see some footage of those shows in David Markey’s film 1991: The Year that Punk Broke,” Moore says. “Actually, I really want to talk to Markey about finding all the footage of that show and perhaps putting out a DVD. You could sense that the crowd loved Nirvana, but I don’t think anybody had the realisation that they’d become a game-changer.

“It just felt like, Wow! F*** everything. This is the only place to be in the world right now. It was one of the greatest times of my entire life.”

THIS MUST BE THE PLACE: FORMER IRISH VENUES
In addition to the Top Hat in Dún Laoghaire, there are a whole range of historic venues around the country that have hosted live shows of legend.

Adelphi, Middle Abbey Street, Dublin
Everyone talks about the only Irish appearance by The Beatles, but lest we forget, The Stones and Dylan also graced its stage. When the Walker Brothers played, a car containing the band and Scott Walker got overturned. The incident affected Walker so profoundly he became one of the word’s most reclusive and secretive artists. Other legends to play the Adelphi include Marlene Dietrich, Louis Armstrong, Diana Ross and Roy Orbison.

Sir Henry’s, South Main Street, Cork
Sonic Youth, Nirvana, Sisters of Mercy and Manic Street Preachers are just some of the acts to pass through this legendary bar and nightclub that closed in 2003. Sir Henry’s was also arguably Ireland’s first clubbing mecca. Residents Shane Johnson and Greg Dowling started Sweat in 1988, which hosted international guests such as Laurent Garnier.

The Arcadia, Bray, Co Wicklow
The Who, Roy Orbison and The Everly Brothers all played an old ballroom in Bray, which is now the site of a cash and carry. Intriguingly, Robert Smith of The Cure wrote a lot of the lyrics for Disintegration when staying in the Bray Head Hotel.

McGonagles, South Anne Street, Dublin
U2, The Stone Roses and Public Enemy are just some of the luminaries who passed through this Dublin’s indie institution of the 1980s and early 1990s. Apparently, when the Stone Roses played, an audience of metal aficionados weren’t impressed. John Squire told me about the experience: “Most of them wanted to beat the shit out of us.”

Marita Conlon-McKenna: ‘I didn’t think I would write another Famine novel’
Real news has value SUBSCRIBE