The new season is strong on singing and orchestral debuts, and composers from Sibelius to Mahler 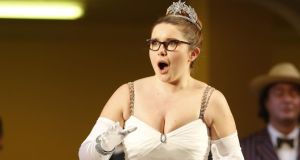 The new concert season kicks off in earnest on Friday, with one of the most explosive works ever written. Stravinsky’s still awe-inspiring Rite of Spring is the big piece in the Bergen Philharmonic Orchestra’s National Concert Hall debut under Andrew Litton. The concert also brings a welcome return by ace Russian violinist Alina Ibragimova (in Mendelssohn’s evergreen Concerto) and opens with Johan Svendsen’s colourfully upbeat Carnival in Paris of 1872.

The Basel Symphony Orchestra and Dennis Russell Davies come to town for the first time on Tuesday, September 29th, when the much-vaunted German- Japanese pianist Alice Sara Ott makes her Irish debut in the glittering, jazzy Concerto in G by Ravel. The evening’s major work is Holst’s The Planets.

The season’s third orchestral debut brings one of the most highly praised of smaller orchestras, the Swedish Chamber Orchestra, to Ireland for the first time (Thursday, November 5th). Under their Danish conductor Thomas Dausgaard, they give the Irish premiere of Albert Schnelzer’s Tim Burton-inspired A Freak in Burbank. The main work is Brahms’s Second Symphony, and Norway’s Christian Ihle Hadland is the soloist in Mozart’s Piano Concerto No 26 in D, K537.

The same Brahms symphony was on the Helsinki Philharmonic Orchestra’s first visit to the NCH in 1984. But their programme this time is an all-Sibelius affair, to mark the 150th anniversary of the composer’s birth. John Storgårds’s programme includes En Saga, the Violin Concerto, the Karelia Suite and Seventh Symphony.

The name of the soloist won’t be known until early December, when the 2015 International Jean Sibelius Violin Competition chooses its next winner.

The next couple of months are strong on singing. The Irish mezzo soprano of the moment, Tara Erraught, gives recitals at Wexford Festival Opera (Monday, October 26th), the NCH (Sunday, November 1st, in the afternoon) and Galway (Wednesday, November 4th). She’ll be back in the new year to sing Mahler with the RTÉ NSO (Friday, February 26th, when the baton will be wielded by Nathalie Stutzmann), and to star as Rosina in a new Wide Open Opera production of Rossini’s Barbiere di Siviglia at the National Opera House in Wexford (Saturday, April 16th) and Bord Gáis Energy Theatre (Wednesday 20th, Friday 22nd, Saturday 23rd).

Baritone Bryn Terfel’s cancelled concert with the RTÉ Concert Orchestra has been rescheduled for October (Thursday 22nd), and tenor Ian Bostridge makes his RTÉCO debut under John Wilson the following month (Thursday 26th). Another leading British tenor is at the NCH a few days earlier: Sunday 22nd is the date for Mark Padmore’s afternoon performance of Schubert’s Die schöne Müllerin with Paul Lewis.

One of the most welcome developments in the National Concert Hall’s programming in recent years has been its embrace of choral music. That pattern continues this year.

First up are The Sixteen under Harry Christophers, who perform Monteverdi’s 1610 Vespers in an off-site concert at St Patrick’s Cathedral (Saturday, October 10th).

Chamber Choir Ireland join forces with the Irish Baroque Orchestra for Handel’s Samson under Matthew Halls (Saturday, January 23rd). And Asia’s most celebrated performers of Bach – the Bach Collegium Japan and their conductor, Masaaki Suzuki – make their Irish debut in the B minor Mass in April (Tuesday 16th).

The first fruit of RTÉ’s new composer residency will see the Irish premiere of Gerald Barry’s 2013 Piano Concerto by Hugh Tinney and the RTÉ NSO under Cristian Macelaru in October (Friday 30th).

The first opera of the new season is Handel’s Agrippina from Irish Youth Opera with the Irish Chamber Orchestra under Jonathan Cohen (on tour from Tuesday, September 8th, to Saturday 19th).

The first solo recital of the NCH’s International Season is by Norwegian pianist Leif-Ove Andsnes (Thursday, October 29th). A new Phil Grabsky documentary about Andsnes’s four-year Beethoven project is released on September 7th, and is due to run at Screen in Dublin and cinemas in Dún Laoghaire, Swords, Dundrum, Carlow, Dungarvan, and Gorey.