This is your four-week warning: festival season is nearly upon us 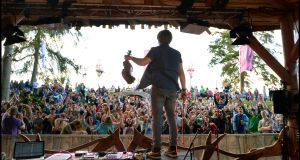 When snow is forecast for April it’s hard to see beyond the grey horizon, but Joe Goddard’s new album, Electric Lines, lifted me from the gloom and transported me to a summer’s night, lost in the wiles of the Irish music festival.

You’re in an overcrowded and overheated dance tent. As you come out the clap of cold air saves you. Your shirt is as unbuttoned, rolled up or removed as it can be, your bulky yet sensible rain coat is tied around your waist, and your Coke bottle filled with lukewarm Buckfast becomes your sceptre, which you wave around to illustrate your midnight chatter. You hop from foot to foot, in time with the music, even if none’s playing any more.

The goosebumps on your arms signify that your body temperature is returning to normal, the thud of far-off music is now no louder than the buzz of the conversation, and you are ready to go and do something: either head for the woods or buy an overpriced drink at the cocktail bar.

That’s what Electric Lines feels like. Granted, a few tracks sound as if Goddard studied the Dev Hynes guide to producing lo-tempo songs with a female voice, but the overall vibe is that summer’s just around the corner and we’re going to have a great time.

Consider every weekend until the end of May as a practice session for the summer of festivals.

Forbidden Fruit (June 3rd-5th) will deliver Danny Brown, Flying Lotus, Moderat, Nao, Booka Shade and, with a DJ set, Hot Chip (Hey Joe!) as armies of people swinging bags of cans parade their way to Kilmainham and tut at people wearing Native American head-dresses. When the sun comes out for a grand total of 30 minutes there’ll be a chorus of “And to think we could have wasted our money and gone to Primavera instead – LOL.”

Your friends will exhaust every Facebook competition going in the build-up to Body & Soul (June 23rd to 25th), in Co Westmeath, trying to win tickets so they can treat every chip van playing Todd Terje’s Inspector Norse as if it’s a main-stage act.

As miserable damp winter days are replaced by magical damp summer nights, our delusions are played up so we can have a good time in a field for 72 hours. You lose it all – your mind, your phone and your friend Mary, who was last seen with a blonde by the Ferris wheel – on the Friday night and refuel it all come Sunday afternoon with dry shampoo, a Berocca and a handful of Crazy Caramels, Tesco’s knock-off Mars bars. You pour one out for the friend who forgot to book Monday off work as you try to scratch last night’s glitter out of your eyes.

Nationwide, young people will go on pilgrimages along scenic walkways such as the Bray-to-Greystones route, on their chosen weekends off booze, so they can rejuvenate for the next big one. The ease of smaller events like Another Love Story (August 18th-20th), in Co Meath, and Castlepalooza (August 4th-6th), in Co Offaly, are minibreaks compared to the rest.

The final fling, Electric Picnic (September 1st-3rd), is the annual reminder of who expects to have everything done for them, as Facebook statuses request lifts, free tickets or spare tents. Your usual culprits will swear they’ll never return to Stradbally, but somehow they arrive on Sunday with a day ticket, just as you knew they would, all giddy and clean, saying that the fomo was too strong.

The Irish festival circuit rarely changes – maybe to the point of exhaustion – but the Buzz, scientifically a very difficult thing to shake off, will get you. It can creep up on you when you least expect it, and if it hasn’t got you now then, just like summer, it’s right around the corner.

Caribou’s Dan Snaith: ‘A lot of pop music is really challenging and interesting’
6

Steve Coogan: ‘Come Out, Ye Black and Tans is two fingers to the British’
8

The Invisible Man review: Tenser than Christmas at the in-laws’
Real news has value SUBSCRIBE