And, in another NCH show, Basel Symphony Orchestra and conductor Dennis Russell Davies memorably take on a major flop 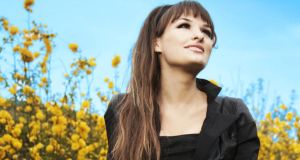 As director-soloist in Vivaldi’s Four Seasons, Nicola Benedetti placed less emphasis on the music’s notated proportions than on the images of birds, animals and weather the composer signposted in the score

Scottish star violinist Nicola Benedetti brought a two-week tour of the music of Vivaldi, Tchaikovsky and Mark-Anthony Turnage to Dublin’s National Concert Hall last week. The concert is in its 11th iteration, and the performing was fresh, focused and energetic, despite the last-minute cancellation of a flight on which two members of Benedetti’s hand-picked, conductorless ensemble were booked to travel from Glasgow.

As director-soloist in Vivaldi’s Four Seasons, Benedetti gave the programmatic aspect distinct priority, placing less emphasis on the music’s notated proportions than on the images of birds, animals, weather and other topoi the composer explicitly signposted in the score. In the first movement of Spring, the familiar tuneful paragraphs stood in heightened and tastefully phrased contrast to the intervening chirruping onomatopoeia, while the tremulous opening chords of Winter sounded as if the performers really were shivering with cold.

Some lesser-spotted Vivaldi (the outer movements of the Concerto in G RV 310) pushed the envelope in a completely different direction by augmenting the ensemble with local junior orchestral players of school age. Here the interpretive style was understandably more orthodox. In the five pithy movements of Turnage’s commissioned contribution to the tour programme, Duetti d’Amore, Benedetti was joined in a pairing of equals by cellist and real-life partner Leonard Elschenbroich. The writing is substantive, tailored to the couple’s intellectual and tonal strengths, and, from an opening of almost Brahmsian seriousness to the witty concluding Blues, it cogently traverses a range of moods and emotions.

With two key players stranded in Scotland, the performance of the original, sextet version of Tchaikovsky’s Souvenir de Florence had been in jeopardy. But at what must have been the shortest of notice, the empty places were filled with aplomb by two senior RTÉ musicians: Adele Johnson, leader of the viola section of the National Symphony Orchestra; and Adrian Mantu, cellist of the Contempo Quartet. Both joined with seeming effortlessness in a treasurable reading.

Last week’s visit to the NCH of the Basel Symphony Orchestra and its chief conductor, Dennis Russell Davies, was memorable not least because the programme began – unusually – with a work that has to be reckoned among the flops of 20th-century music. The score for Les Mariés de la Tour Eiffel , initiated by Jean Cocteau as a piece of surreal theatre, was co-written in 1921 by five members of the circle of French composers known as Le s Six. Its 10 movements show few signs of productive competition between the better-known contributors – Poulenc, Milhaud and Honegger – none of whom seems to have tried to outdo the others in anything but buffoonery.

Instead, the interest resides in the apparently greater efforts of the collaborators whose fame rests primarily on their membership of the circle: Georges Auric and Germaine Tailleferre. Omitting the dialogue Cocteau originally intended to be spoken through megaphones, this concert performance was intriguing at least for being the only live one most of those present are likely to have experienced. And nothing about it made me wish I could have experienced a better one. But the quirky opener also served to establish a French sound-world in which the following item, Ravel’s G major Piano Concerto of 1932, was potently contextualised.

Davies’s unobtrusive yet meticulous direction secured chamber music-like integration with the felicitous playing of German-Japanese soloist Alice Sara Ott. The latter trounced the challenges of the piano part with athletic delicacy and unearthed seams of colour and lyricism where others find mere percussiveness.

In Holst’s Planets Suite the high quality of the orchestral performing continued, though not the sense that the music was going exactly as best it might. To be sure, Mercury, the Winged Messenger was dispatched with impressive fleetness, and the big tunes of Jupiter can have left no souls unstirred.

But all the heavy ammunition had been used up, it seemed, before Mars, the Bringer of War was played out, while in the other-wordly tableaux of Venus and Saturn the accompaniments and melodies were reluctant to assert their positions respectively off and on the main beat.

In the offstage choral fade-out of Neptune, robustly supplied by students from the Royal Irish Academy of Music, the desired effect of becoming mystically “lost in the distance” proved elusive.

There are concerts when conductors appear to get exactly what they want; there are others when the orchestra creates the illusion of sounding like a single instrument. But how often do those circumstances combine so well that it seems as if all the musicians are having their parts played for them at the same time by the conductor?

Such rare sleight of hand was the remarkable achievement last Friday of the RTÉ NSO in its first concert under guest Norwegian conductor Eivind Gullberg Jensen. On a technical level, the orchestra must take its share of the credit. The string basses launched the Andante of Sibelius’s Symphony No 2 with a pizzicato passage so unified I had to look to make sure it wasn’t being played by only one or two musicians. Throughout, the execution of the horn section was so clean that, had they been in a recording studio, no one would asked them for any second takes. The list could go on.

The sense that the orchestra must have had twice the regular amount of rehearsal time must be put down to Gullberg Jensen, his patient ear for detail and profound knowledge of the evening’s three scores. Wagner’s Siegfried Idyll was a model of co-ordinated serenity. The glories of Sibelius brimmed with individuality and optimism. Yet, thanks in no small part to the exquisite playing of German soloist Veronika Eberle, the subtle intricacies of Berg’s Violin Concerto, in a finest hour for the RTÉ NSO, yielded the finest moments of all.