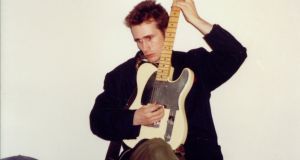 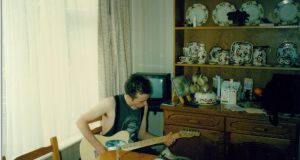 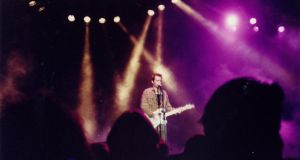 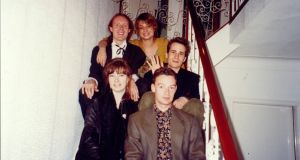 From The Smiths at Dundalk’s Fairways Hotel to Nirvana playing the Top Hat in Dún Laoghaire and David Bowie in the Baggot Inn, there are some concerts that have become a thing of wonder.

But Jeff Buckley’s appearance at the 1992 Trinity Ball is perhaps the most mystifying of them all.

Buckley arrived in Dublin in May of that year as a complete unknown. He had no promoter, no manager, no record deal, no album to sell and had never before performed outside the US.

He had only just begun performing at Sin-é, the tiny Irish cafe in New York’s East Village where he would make his name.

It would be more than two years before his acclaimed debut album, Grace, was released. So, how did this singer from Anaheim, California – whose early death would later make him an icon – end up performing in front of oblivious students dressed in tuxedos and dinner dresses?

Incredibly, there is footage of the show.

For nearly 25 years, this recording – on a beat-up Scotch videotape – has been boxed away. The footage features a young Buckley strolling around College Green, watching the fireworks to mark Trinity’s 400th year celebrations and walking in-shot of then President Mary Robinson.

The tape also includes his full five-song set, shot from the side of stage. That night, he played an eclectic set of covers that consisted of songs by Sister Rosetta Tharpe, Bob Dylan, Led Zeppelin, Porter Wagoner and Van Morrison.

The man who filmed it was a Dubliner named Michael Murphy, then working as an A&R scout for the now defunct record label, Imago.

“I totally forgot that I had recorded that show,” he says. “I would imagine it’s the first ever Jeff Buckley solo show that was filmed.” Murphy has no plans to release the footage although he has allowed some of the audio to be used in an RTÉ radio documentary that I have made.

We’re sat in the sitting room of Murphy’s parents’ house. He brought Buckley to Ireland, and he stayed in this house.

“He sat where you’re sat and watched The Late Late Show with my parents before going to do the gig,” Murphy says with a smile.

Murphy emigrated to New York in early 1992 and first encountered Buckley playing in a band called Gods and Monsters.

“He left Gods and Monsters shortly after the show that I saw. That’s when he began playing in Sin-é as a solo act.”

Sin-é was a tiny coffee shop in the East Village that was set up by two Irish emigrants, Shane Doyle and Karl Geary. It sold bad coffee by day but, by night, it became something special.

Buckley had played there at least once before, with Glen Hansard in August 1991. He had met Hansard after answering an advertisement in Los Angeles to perform with The Commitments, who were on a promotional tour for the US release of the movie.

This gig brought him to Sin-é and, in April 1992, he took over a Monday night residency.

“He was the guy you went to see anytime that you were free,” says Murphy. “Every night that Jeff was playing, we went down. And there were times when the audience was five or six people. So, you’re seeing somebody very early in their career. They’re not playing to an audience, because there is no audience.”

Murphy and and Imago’s head of A&R (artists and repertoire), Kate Hyman, were convinced of Buckley’s potential, and Murphy, a Trinity graduate, got in touch with its then entertainments officer, Colm O’Dwyer.

Buckley flew to Dublin on May 14th.

“Most people when they come for such a short period of time would bring a rucksack with some clothes, but Jeff was standing at Dublin Airport in his Sex Pistols T-shirt and he had this big, New York-style ghetto blaster that he had brought for two-and-a-half days in Dublin.

“We drove to the Boyne Valley to see Newgrange. We then went to see old monastic ruins, stopped in Slane for something to eat and he was just good company. He wasn’t this laid-back guy, though.

“I remember him asking my brother not to smoke in the car because he wanted to look after his voice. He was very focused.”

In the hours before his early-morning set at the Trinity Ball, rather than go out in Dublin, Buckley stayed home.

“I had organised a dinner in town with some music industry people that had flown in and I invited Jeff along, but he said, ‘No, is it okay if I stay here with your mum and dad?’ So, instead of going out for this showbiz dinner, he elected to stay here, sitting at the kitchen table, to watch The Late Late Show with Mum and Dad.”

The late-stage times at the Trinity Ball meant that Buckley was on around midnight. Watching the footage, it’s notable how the crowd thins out by the time Buckley ends his set.

He would later tell journalists that he was drawn to Sin-é because he wanted to learn how to move crowds in an intimate space.

“If I can’t move two or three people in a room,” he would say, “then what’s the point?”

After the Trinity Ball, Buckley spent more than a year playing regularly at the cafe. Murphy was at many of those shows but could not convince the owner of Imago, Terry Ellis, to sign Buckley.

“My exact recollection of Terry’s statement was, ‘We don’t need a spaced-out poet who doesn’t write his own songs on the label’. ”

Buckley made three further visits to Dublin, before his death, aged 30. He died after drowning in the Mississippi River on May 29th, 1997, leaving only one complete album behind.

Were he alive today, he would turn 50 this November 17th.

“I hear Jeff in so much music now,” he adds. “And how great is that. That this skinny little white guy, in the big shirt at the Trinity Ball, went on to leave this incredible legacy.”

Steve Cummins’ documentary, Sin-é: Jeff Buckley’s Irish Odyssey, will be broadcast on RTÉ Radio One on Saturday, November 12th at 2pm as part of the Documentary on One. Visit rte.ie/radio1/doconone/2016/1104/829140-sin-e-jeff-buckleys-irish-odyssey/ to listen back

The Strokes: The New Abnormal

Love Wedding Repeat: You should avoid this ‘Four Weddings’ rip-off
8

The Iron Mask: A bonkers movie with a bonkers lineage
9

One World: Together at Home – the Irishman who helped get Lady Gaga to say yes
Real news has value SUBSCRIBE