The Gloaming: ‘We’ve lost cohesion in our communities’

Ahead of their sold-out concerts at the NCH, The Gloaming reflect on modern Ireland, women in trad, and how they work, rest and play 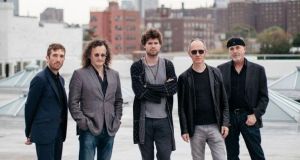 The National Concert Hall is a sacred space in the history of The Gloaming. Not many acts can claim to have played their first gig on Earlsfort Terrace, but the Irish-American supergroup, featuring Martin Hayes, Iarla Ó Lionáird, Caoimhín Ó Raghallaigh, Dennis Cahill and Thomas Bartlett, sold out the former exhibition palace and winter garden before they’d even played a note together. On the eve of another run of historic shows, they discuss how they are “bonded” to the NCH – and a whole lot more.

Each annual Gloaming residency sells out quicker than the last. What makes these shows so special?
Thomas Bartlett: After playing our very first show there, we became really bonded to the National Concert Hall. It’s still absolutely amazing to me to have fallen into the situation where such a thing was even possible. I think because the room holds such importance for us as a band, and because the residency has become an annual tradition, we approach these shows with a particular kind of fire and focus, but also in the knowledge that we can really take our time to stretch out and explore, and that the audience will happily go wandering with us.

Apart from the National Concert Hall, where in the world have you really enjoyed playing?
Caoimhín Ó Raghallaigh: Union Chapel in London is spectacular – in how it looks, feels, and sounds. It is definitely one of my favourite venues. Playing the Sydney Opera House was a real thrill. I remember walking over the Sydney Harbour Bridge that morning, pinching myself that we were playing there that night. Teatro de la Ciudad in Mexico City is amazing, too. I reckon Mexico is one of the best places on the planet at the moment. I’d love to go back.

Your biggest influence – musically, creatively, or otherwise?
Thomas Bartlett: I find nothing quite as satisfying, or as instructive, as a perfect restaurant. Rita Sodi’s I Sodi in New York, and Fergus Henderson’s St. John in London consistently soothe and inspire me the most. It’s everything about them - the food, lighting, service, the menu font - and how it all works together. You can actually tell a lot about what the food in any restaurant is going to be like from the graphic design. For me, they are both uniquely enchanted and protected spaces.

What are your travelling and touring essentials?
Dennis Cahill: A guitar, a picture of my wife, headphones, a small bottle of Powers, and a good book.

You look like a pretty serious bunch – but who’s the joker in The Gloaming?
Iarla Ó Lionáird: Depends on who last shuffles the deck.

What was The Gloaming’s most spectacular Spinal Tap moment?
Martin Hayes: We’ve had a very lucky run without any significant chaotic moment to recall. The most terrifying and stomach-churning gig was our first one, which was at the National Concert Hall, of course. We had a full house, but absolutely no clue what the band would be like in a live performance. Fortunately, it went well.

What motivates you to get out of bed in the mornings?
Caoimhín Ó Raghallaigh: Getting out of bed in the mornings is definitely not my forte as I’m very much a night owl. In terms of what motivates me, most of the time it is simply very ordinary pursuits, such as making lists of things to do and just getting through them. From time to time, I can get totally enthused and obsessed over something, and absolutely nothing can distract me from that for days, weeks or months.

Thomas Bartlett’s music has often been likened to Steve Reich in its minimalist style. Is he a fan?
Thomas Bartlett: I am, of course, a huge fan of Reich, but I don’t think I do anything as rigorously structured or conceptual. It’s more a matter of using repetition to build up little rogue textures that live at cross purpose with the tunes. Perhaps this is an obvious choice, but I love Music for 18 Musicians,which is equally effective for both napping and house-cleaning.

If someone was going to Clare, where Martin Hayes is from, where would you recommend?
Martin Hayes: I’m from east Clare. I think very few people actually know about it. I would advise anyone to drive north from Killaloe along the beautiful shores of Lough Derg, and then take the Norbury Line (L4016) from Scariff to see the beautiful valley of Lough Graney. From there, continue north through Killanena towards Gort, make your way to Ardrahan, and take a left out the coast road all the way along north Clare, and see the beautiful Burren. Then, you’ll have seen what I consider to be the most beautiful parts of Clare.

What era of music would you like explore in the future?
Iarla Ó Lionáird: The musical territories currently occupied by the likes of Stars of the Lid, Nils Frahm and Jon Hopkins greatly appeal to me, alongside the works of many artists associated with early ambient music. Sometimes, I think some of that stuff would be even better if they just added a voice, but then again, I would say that, wouldn’t I? There are fields of memory and place and then there are the instruments and tools we interact with. I would like to see us expand the interaction between the studio as a place, and us. Find a field of discovery with new tools for play, regardless of era or genre.

Who were/are the groundbreaking women in traditional Irish music?
Iarla Ó Lionáird: There are many. For example, Máire Ní Scolaí sang traditional songs with piano accompaniment at the dawn of radio broadcasting and recording in Ireland. Some may carp at the collision of worlds here, but being first is not without risk, and her fieldwork was first rate. I also think about Triona Ní Dhomhnaill – her intricate piano accompaniment and the beautifully constructed vocal harmonies she sung with her sister Maighread. To me, the early press photos of Triona always suggested the Velvet Underground. She had a deep grounding in tradition, but also an ear finely tuned to popular music.

Has the trad scene improved for women?
Iarla Ó Lionáird: In some ways it is ridiculous for a member of the Gloaming to even attempt to comment on this, for very obvious reasons, but if traditional music is reflective of art creation and society in general, as I feel it is, then women in our musical world need more access, more support, and more respect in the interests of equality.

How do you think Ireland has changed over the course of your lifetime? What are the positive and negative aspects of this change?
Martin Hayes: I grew up on a farm where we cut hay with horses. We went out to the bog to collect turf with a donkey. Now, there is less physical hardship and we’ve got so much more comfort, freedom and variety in our lives, but we’ve also lost a lot of cohesion in our communities. There is far less interaction between neighbours on a daily basis anymore, so I feel we’ve lost a lot of human contact, which for me is the greatest source of joy. A night of conversation is infinitely better than a night watching TV.

Is this your dream job?
Dennis Cahill: Yes, of course. There is nothing better than playing great venues with these musicians.

What is your hope for humanity and the world during the 21st century?
Martin Hayes: My hope is that education becomes more enlightened. It should encourage more creative curiosity and critical thinking and have less of an emphasis on job training. We need more free thinkers. We need people to develop their natural potential and not just be moulded to meet perceived needs. I also hope we can move away from fossil fuels as quickly as possible and create a future where our interaction with the planet is rooted in sustainability. It would be great to see democracy become more transparent and responsive, and less binary.