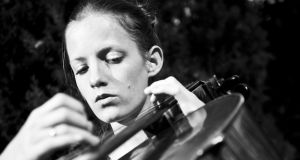 Naomi Berrill: draws on classical, folk, jazz and rock sources, but the results are resistant to easy definition

Naomi Berrill
Black Gate Cultural Centre, Galway, 8pm, 10, blackgate.ie
Galway-born, Florence-based cellist Naomi Berrill is one of those brave and inventive musicians, entirely unfettered by genre, who is describing the future of art music. Scion of a notable Galway musical family, Berrill is back in the west tonight to launch her second album, To The Sky, with support from her talented brothers, clarinetist Matthew and trumpeter Peter. Berrill’s spacious, ethereal music draws on classical, folk, jazz and rock sources, but the results are resistant to easy definition – best to just check it out for yourself through Hand Made Music, a series of beautifully atmospheric performance videos, filmed in the workshops of Florence’s artisans and craftspeople, available on Berrill’s YouTube channel.

Aoife Doyle Band
Arthurs, Dublin, 9pm, 10, arthurspub.ie
Aoife Doyle combines the guts and vulnerability of a blues singer with the poise and musicianship of a well-schooled jazz artist. The Dublin-born vocalist’s two albums to date have charted her growth from singer to songwriter, and she always keeps impeccable musical company. This Arthurs show is no different, with Doyle’s regular quartet – featuring pianist Johnny Taylor, bassist Andrew Csibi and drummer Dominic Mullen – representing very much the Irish scene’s gold standard when it comes to accompanying singers.

David Lyttle & Andreas Varady
Yeats Memorial Building, Sligo, 7pm, 10/5, davidlyttle.com (also Sunday 14, Bennigans, Derry, 5pm, £5)
Slovakian guitarist Andreas Varady cut his teeth as a child prodigy busking for change on the streets of Limerick, but his star has ascended to dizzy heights since then, snapped up by Quincy Jones’ management company and touring the world with his idol George Benson. All that is due, at least in part, to the help and encouragement he received from Belfast drummer and producer David Lyttle, who spotted the young guitarist and produced his debut album back in 2010. The two are reuniting for a couple of duo dates in the northwest this month, a rare chance to catch Varady back on Irish soil – not to mention the ever-busy  Lyttle, who has just returned from a British Council-sponsored residency in China.