Suing U2: who really created that ‘Achtung Baby’ guitar solo?

A British musician claims U2 copied his demo tape, but copyright infringement is ‘a terribly inexact science’ 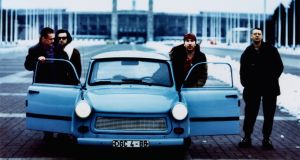 U2 in Berlin. For many ‘Achtung Baby’ is the band’s finest moment, so an accusation of plagiarism could threaten to undermine the album’s – and the band’s – credentials

“Every artist is a cannibal, every poet is a thief,” sings Bono on U2’s 1991 hit The Fly. That assertion is about to be tested in a New York court.

A British songwriter and guitarist, Paul Rose, is suing the band for copyright infringement, claiming it nicked significant elements of his 1989 instrumental tune Nae Slappin, particularly the “elaborate and distinctive guitar solo” and used them in The Fly. Basically, he’s slappin’ them with a lawsuit.

“An ordinary lay observer would reasonably find that the songs are substantially similar and that an infringement has occurred,” says Rose in the lawsuit.

According to Rose, U2 had been searching desperately for a new sound following the critical drubbing for their album Rattle And Hum, and may have heard a demo Rose sent to the band’s label Island Records.

For many Achtung Baby is U2’s finest moment, so an accusation of plagiarism could threaten to undermine the album’s – and the band’s – credentials

“Although perhaps the most popular rock band in the world in the 1980s, by that decade’s end the band felt in need of reinvigoration,” said Rose’s lawyer Thomas Mullaney. The Fly’s “dance beats, distorted vocals and hard industrial edge sounded nothing like typical U2”.

Rose is seeking $5 million (€4.75m) in damages, plus costs, and a songwriting credit on the track which is currently credited to all four members of U2.

Though the lawsuit has been filed, at time of going to press U2 had made no public statement on the case.

Listening to the two tracks side by side, they do sound similar. Both are built on a driving E riff, and Rose’s stabbing, sustained opening guitar licks sound uncannily like The Edge’s solo on The Fly.

The Fly was the first single from U2’s 1991 album Achtung Baby, and when it came buzzing onto the airwaves in October 1991, it signalled a band with a new-found direction and confidence, and sent out a message that U2 had indeed “dreamed it all up again”.

For many Achtung Baby is U2’s finest moment, so an accusation of plagiarism could threaten to undermine the album’s – and the band’s – credentials. If others come out of the woodwork claiming provenance for such songs as Even Better Than the Real Thing, Mysterious Ways or – god forbid – One, it could really rattle the band to its core.

But big bands getting sued for plagiarism by lesser-known acts is nothing new. Led Zeppelin have been dogged by lawsuits throughout their career, accused of stealing from blues musicians such as Howlin’ Wolf and Willie Dixon, and also from some of their contemporaries.

In 2010 American folk singer Jake Holmes claimed he was the original writer of Dazed And Confused, while last year the band successfully defended a suit claiming that their best-known song, Stairway to Heaven, was stolen from an instrumental song called Taurus by US band Spirit.

If you have a four-minute song, and you have 25 seconds of a guitar solo that’s been ripped off, it might only amount to 12½ per cent of that song, but it’s still a breach of copyright for that piece

In 2014, US rocker Tom Petty and English torch singer Sam Smith came to an “amicable settlement” over Smith’s Grammy-nominated hit Stay With Me, which by “complete coincidence” seemed to share a chorus with Petty’s 1989 hit I Won’t Back Down. Petty and co-writer Jeff Lynne now have songwriting credits on Stay With Me.

“I have never had any hard feelings toward Sam,” Petty said. “All my years of songwriting have shown me these things can happen. Most times you catch it before it gets out the studio door but in this case it got by.”

Marvin Gaye’s family were not so amicable when they heard Robin Thicke and Pharrell Williams’s 2013 hit Blurred Lines, which they said copied Gaye’s 1977 hit Got to Give it Up. The court awarded damages of $7.4 million (€7m), later reduced to $5.3 million (€5m).

In a world where music styles, grooves and genres mix it up freely, suing for copyright infringement is emerging as a viable income stream for cash-strapped songwriters who believe a famous person may have nicked their song.

“In order to establish a copyright breach you have to do comparisons on all the chords and notes in each song,” says solicitor Keiran Kelly, an expert in music copyright law. “The court will engage mucicologists, basically professors of music, who will correlate all the parts of the song and decide whether there’s a similarity.”

Rose won’t have to prove that U2 actually heard his song wafting from the stereo of the Island Records offices before they went off to write The Fly, says Kelly.

“The question is, are they similar? There was a case I worked on a couple of years ago where there was a view that 25 per cent of the song followed the same structure and melodies. That was enough to get it over the line.

“I don’t think there’s a hard and fast rule, but if you just have two or three chords together it’s not enough. You need a repetitive sequence of chords and notes before it would be identifiable.

“If you have a four-minute song, and you have 25 seconds of a guitar solo that’s been ripped off, it might only amount to 12½ per cent of that song, but it’s still a breach of copyright for that piece.”

And it doesn’t have to be a note-for-note steal to infringe copyright either, says Kelly. “It’s a terribly inexact science. Just changing a few notes here and there doesn’t mean you haven’t lifted it or copied it or pirated it.”

Rose says he waited 26 years before coming forward to make his claim of copyright infringement against U2 because he didn’t want to jeopardise his career.

He also says that he only recently found an ex-employee of Island Records who he claims confirmed that his demo tape was played often at the Island Records office while U2 were making Achtung Baby.

“It will be a big uphill struggle for him to persuade a court to proceed with this so many years after this alleged infringement occurred,” reckons Kelly.

Under US copyright law a three-year statute of limitations applies on copyright infringement, so if Rose wins his case against U2 he will be entitled to royalties only for the three years prior to filing his lawsuit.

He could be awarded damages, and he would also be entitled to all future royalties for the song, but he wouldn’t get any of the considerable royalties earned during the two decades following the song’s release.

“You’d have to make a case as to why that should be extended, for instance if it wasn’t discoverable or if it was being concealed by some means or by fraud,” says Kelly.

The absence of lyrics or a melody to compare with the U2 song won’t help his case either, says Kelly.

If Rose, however, obtained a settlement of some sort from U2, the publicity could help his career as people check out the virtuoso jazz-rock stylings on his 12 albums.