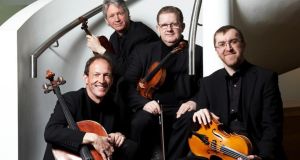 The west Cork Chamber Music Festival in Bantry went out in a blitz of energy on Saturday, with the combined RTÉ Vanbrugh and Jupiter String Quartets in a performance of the youthful Octet by George Enescu. Enescu is best known through the tuneful romp of a Romanian Rhapsody for orchestra, a work which, sadly for his cause, is not at all typical.

The teacher to whom Enescu declared the greatest debt was André Gédalge, who wrote a famous Treatise on Fugue. Enescu once declared: “Polyphony is the essential principle of my musical language; I’m not a person for pretty successions of chords. I have a horror of everything which stagnates . . . Harmonic progressions only amount to a sort of elementary improvisation. However short it is, a piece deserves to be called a musical composition only if it has a line, a melody, or, even better, melodies superimposed on one another.”

There are times when Enescu can sound a bit like someone holding court through the simplest of means, regenerating his sentences so that they never seem to end – except that there’s usually more than one sentence at a time. The Octet is massive and intimate, almost orchestral at one extreme, and like a delicate, individual reverie at the other. For a 19-year-old student, which Enescu was when he completed it in 1900, it’s an astonishing achievement, and the Bantry performance captured all its moods with rare fidelity.

Enescu featured elsewhere in the festival, too, with Ukrainian pianist Alexei Grynyuk finding his best form in a technically resourceful performance of the neo-classical Second Suite. He did not sound quite as well in his contributions to the memorial concert for Romanian pianist Mihaela Ursuleasa, who was booked for this year’s festival, but died, aged 33, last August.

This year’s standout performances included the mesmerising mechanisms of Ligeti’s second book of Études from the quick-fingered Finnish pianist Joonas Ahonen, a recital of songs by Falla, Ernesto Halffter, Turina and Montsalvatge from the heart-warming Spanish mezzo soprano Clara Mouriz and pianist Julius Drake, the utterly seductive tone of Finnish clarinettist Christoffer Sundqvist in Osvaldo Golijov’s The Dreams and Prayers of Isaac the Blind with the Jupiter Quartet, a rigorous, penetrating performance of Haydn’s Seven Last Words from Cuarteto Casals (even if the PA muffled Theo Dorgan’s reading of words by Michael Hartnett), and Tchaikovsky’s sextet Souvenir de Florence, led by Israeli violinist Vadim Gluzman with ineffable ease, playing a Strad that had been used in the première. John Kinsella’s new quartet, his fifth, premiered by the Vanbrughs somehow flew past me. Working out whether that was my fault or the music’s will have to await a second hearing.

Emerging talent
The history of opera in 21st-century Ireland has been full of unpredictable twists and turn. Orchestras from Belarus and Kraków have played in the pit at the Wexford festival. Opera Ireland, which seemed on the up when Niall Doyle was appointed chief executive in 2006, has gone out of business. The Irish National Opera company that was to replace it disappeared in a puff of smoke.

New players have emerged, with Fergus Sheil’s Wide Open Opera bringing Ireland its first Tristan und Isolde since the 1960s and setting what seems to be an Arts Council record with a first-time grant of €608,465 in 2012. Oliver Mears’s NI Opera has presented home produced Wagner in Belfast (The Flying Dutchman), taken an Irish production to China (Britten’s Noye’s Fludde) and will present the Irish première of Gerald Barry’s The Importance of Being Earnest in October.

It’s not been an upswing for everyone. Plans by Eugene Downes, former chief executive of Culture Ireland, to reignite the idea of a national opera company and to engineer a takeover of Opera Theatre Company came to naught. And OTC has now announced the names of its new chief executive and artistic director, succeeding Kirsty Harris and Annelies Miskimmo.

The new chief executive is Rosemary Collier, and the new artistic director Fergus Sheil. Collier is chief executive of Kilkenny Arts Festival, and Sheil is artistic director of Wide Open Opera and Wide Open Music. Strange as it may seem, Collier and Sheil’s key background may not be the jobs they are doing at the moment. Both have also worked for the Arts Council, Collier as head of music and opera and Sheil as music specialist. The opera sector has never shown the kind of savvy in its dealings with the Arts Council that, say, the theatre sector has shown, and that includes the Wexford festival, which found itself for years on a standstill grant, as it struggled with its orchestra issues – Wexford’s access to state funding for its new opera house was negotiated directly with powers higher than the council.

Given their insider backgrounds, it will be interesting to see what effect Collier and Sheil will have on the profile of OTC (which, embarrassingly, returned €360,000 for an abortive Irish première of Berg’s Wozzeck earlier this year) and of opera in general. Wide Open Opera’s chairman, Michael Wall, has welcomed Sheil’s appointment, describing the two companies’ work as “complementary”. OTC resumes its tour of Bizet’s Carmen in Ennis on Tuesday, October 15th. Wide Open Opera’s next venture is a concert performance of Raymond Deane’s The Alma Fetish at the NCH on Tuesday, September 17th.

Change at the top
Opera is not the only area experiencing change at the top. At the beginning of the year the vacancy created by Christine Lee’s resignation as general manager of the RTÉ National Symphony Orchestra was filled by Declan McGovern. Rosa Solinas, formerly head of music at the Arts Council of Northern Ireland, then took over McGovern’s previous position, as chief executive of the Ulster Orchestra.

The Irish Chamber Orchestra has now appointed a chief executive to replace John Kelly, who resigned last year. The post has gone to Gerry Keenan, a man well placed to understand the challenges the orchestra faces. Keenan was the orchestra’s manager from 1987 to 1993, before it relocated from Dublin to Limerick, when its players were mostly members of the two RTÉ orchestras. He’s been acting chief executive since Kelly left, elevated from the post of orchestra manager, which he held from 2006 to 2012.

His history with the ICO is longer than that of anyone else who’s involved with the orchestra, apart from board member and former chairman Frank Casey.

Careless whispers: how the German public used and abused the Gestapo
10