Space Jam: the best soundtrack of them all?

Is the 1996 classic featuring R Kelly, Seal and Coolio - getting a reissue for Record Store Day - a peerless slam-dunk from a time when soundtracks mattered 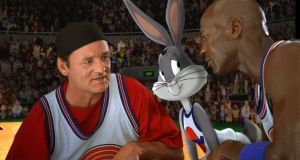 Who could have predicted the lingering legacy of Space Jam? The film’s outline reads like a Hollywood executive’s drug-induced fever dream when you lay it out in the daylight. The movie took Michael Jordan, a sports megastar with no real acting experience, and superimposed him playing basketball with Bugs Bunny, Daffy Duck and some other six-decade old cartoon characters.

The whole thing was packaged with an expensive soundtrack and, for the hell of it, Bill Murray was thrown into the mixer. If, like me, you were 11-years-old back in 1996, of course you loved this crazy thing. You were powerless to resist.

For my generation, Space Jam is gold-standard nostalgia. The lasting affection for the film is being reaffirmed with the reissue of its soundtrack (you’ll even be able to pick it up on vinyl). Despite being, for all intents and purposes, a kids film, Warner Bros threw buckets of cash to fund original music to keep teens and adults bumping their Sony Walkman. Pulling in some of the biggest stars of the mid-1990s, the result was a rippling mixtape of pop belters, massive ballads and steely street rap.

The rise of MTV in the 1980s trailblazed a marriage of music and visuals that blockbusters like Space Jam seemed to feed off. The funky guitar licks and smooth vocals of Seal’s Fly Like An Eagle fit Jordan’s gravity-defying dunks as smoothly as His Royal Airness once sank jump shots.

The movie’s five “Monstars” were represented by rappers B-Real, Busta Rhymes, Coolio, LL Cool J and Method Man on the rasping boom-bap of Hit ‘Em High (The Monstars Anthem). R Kelly’s soaring I Believe I Can Fly – a ubiquitous presence in pop culture when it was released – no doubt inspired burgeoning basketball players to spend extra hours on the court.

It was a common Hollywood tactic back then. Blockbuster pop discs were created to help promote the movies. It was the opposite of, say, Hans Zimmer’s sweeping orchestration or Quentin Tarentino’s dusty crate digging. These soundtracks threw up some hidden classics, indie crossovers and weird collaborations. Space Jam features Basketball Jones, a Barry White-Chris Rock collaboration that was used to dramatise the thoughts of basketball star Charles Barkley.

Being forced to shoehorn in these tracks was probably a filmmaker’s nightmare. Tim Burton, for example, might have been a Prince fan, but he was pushed by the studio into including Prince’s new music in Batman. It helped that it worked. Seeing the movie and then playing the soundtrack all summer, made the whole thing feel like an event. It’s a practice you don’t see too much these days.

With Space Jam 2 in development, maybe it’ll produce another knockout soundtrack. The film is slated to star current NBA superstar LeBron James, who last week took to Instagram to preview his early copy of Kendrick Lamar’s new album DAMN.. If executed incorrectly, the film risks angering the loyal disciples of the original. Still, if a few Space Jam veterans can be roped into recording, and if King James can parlay his connections with the likes of Kendrick and Lil Wayne to bring them into the fold, it’s tantalising to think how hard the music might bang.

Thinking Again by Jan Morris: a reflective and melancholy collection
8