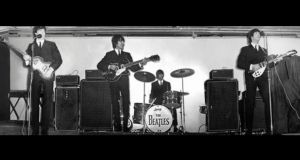 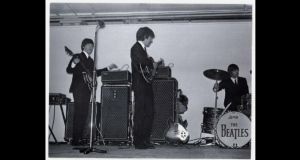 The Beatles play live in the King’s Hall in south Belfast in November 1964. Left to right are Paul McCartney, George Harrison and Ringo Starr, with John Lennon out of shot. The shot shows classic 1960s instruments awaiting play including a Rickenbacker electric guitar and a Vox Continental electric organ at left. File photograph: Nick Newbery/PRONI

New photographs of the Beatles taken by a photographer who didn’t even like the band were released on Wednesday by the Public Records Office of Northern Ireland (PRONI).

The pictures were taken by Canadian student Nick Newbery, who had a front row seat when John, Paul, George and Ringo played in the King’s Hall in south Belfast in November 1964.

The Beatles were playing hot on the heels of hit singles such as Can’t Buy Me Love and She Loves You, and were becoming a worldwide sensation as the Fab Four.

Thousands of fans packed the venue for the concert, although Mr Newbery’s focus was totally on the band rather than the audience.

“Yes, they do look as if they were taken in your local hall,” said Iain Fleming of the public record office, based in Belfast’s Titanic Quarter.

“Nick deposited this collection in PRONI just last month, and we are hugely grateful to him for sharing these unique images.

“I am sure there are people out there who attended the concert and would love to see the images,” he added.

Mr Fleming explained that Mr Newbery, a Canadian studying in Belfast, was asked to take the pictures on behalf of Queen’s University student magazine, the Gown, which is celebrating 60 years of publication this year.

It seems the Gown’s editorial staff weren’t exactly in tune with the developing zeitgeist in 1964.

“Nick said their regular photographer had a 10 shilling ticket to see the band but didn’t like them and asked him to go instead. He said he took five pictures, but when he handed them over to the Gown they didn’t want them. So they were never published.”

Mr Fleming said the pictures should strike a chord for people of all generations, including young people just discovering the band.

“With the psychedelic classic Beatles album Sgt Pepper’s Lonely Hearts Club Band having just been added to the GCSE music syllabus, pictures like these can bring home to students here the local connection with this global popular band, who continue to resonate throughout popular art and culture,” he added.

Mr Fleming said while Mr Newbery was present for what was a moment in pop history, he wasn’t at all overawed.

He explained, “Nick told me, ‘I wasn’t particularly fond of the rock group but they were famous and I had a front row seat’.”