Buildings across the US are lit in purple to mark the death of pop icon Prince. Video: Reuters 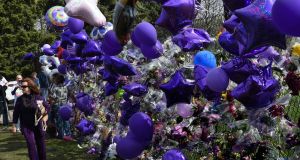 A Prince fan carries her dog past a sea of purple balloons and flowers at a memorial wall outside the Paisley Park compound in Minneapolis, Minnesota, on April 23rd, 2016. Photograph: Mark Ralston/AFP/Getty Images

Prince’s sister is not “business savvy” enough to handle the rights to her brother’s vast music catalogue, his former manager has said, amid reports she could be set to inherit his multi-million dollar fortune.

Reformed drug addict Tyka Nelson could be in line to acquire the superstar’s estate, including his vault of unreleased material, if he failed to leave behind a will following his sudden death on Thursday, according to reports.

Owen Husney, Prince’s first manager, said he had “prayed” the star’s legacy had been left “in good hands”.

He told the Press Association: “I’m sure Tyka is a great person. I would be remiss to think she has the music business savvy to be able to handle a body of work that’s got to be worth 250 to 500 million dollars.

“Prince’s music has never really appeared in commercials. God forbid someone gets hold of this thing and it winds up in some toothpaste commercial.

“I pray that he has left it in good hands with people who know what they’re doing.”

Prince, the brother of Ms Nelson (55), was found collapsed in a lift by staff members at his Paisley Park estate near Minneapolis on Thursday morning, more than 12 hours after he last seen alive. The 57-year-old was pronounced dead at the scene.

Police are investigating whether foul play was involved in the singer’s death after police said they had “no reason to believe” he killed himself and there were “no obvious signs of trauma” on his body.

Mr Husney said he unaware whether Prince had been taking prescription drugs before his death but voiced concerns that users can accidentally overdose when they have not eaten.

He said: “Doctors are prescribing these things a mile-a-minute. People become addicted and they can OD....if, by mistake, you take these drugs that you’ve been taking everyday on an empty stomach, let’s say. It becomes accidental.

“I know the pressure of the business. I know for someone like Prince who was moving a million miles an hour, it could have been anything. It does not have to be drugs.

“He pushed himself beyond anyone I’ve ever known. He couldn’t stop. Just the way’s he’s built.”

A postmortem examination was carried out on Prince’s body on Friday but a cause of death may not be released for several weeks.

Screenings of Prince’s Oscar-winning film Purple Rain are taking place across US cities later, including a showing at Target Field Station in Minneapolis.