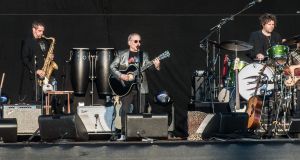 Singer-songwriter Paul Simon at the RDS in Dublin: As always he was accompanied by a brilliant band of world-class musicians. Photograph: James Forde

Suddenly a hush, all the bustle in the RDS, all the movement, laughter, impromptu reunions and snatches of overheard conversation appearing to consist of trading song titles. It is agreed; Paul Simon has an astonishing body of work and his fans know everything. No one wanted to miss this. The atmosphere is one of relaxed anticipation, the sun even comes out.

The plaintive sound of strings draws all eyes to the huge stage. The audience settle as one. A graceful instrumental introduction announces that Simon is about to perform his classic America, a song he has sung so many times yet the only thing time, and the current international embarrassment the US is experiencing, has done to the beauty of Simon’s lament is make it even more charged with emotion. Paul Simon, master musician and now very much a wise man of the tribe of world artists, brought his magic and a certain brand of goodness, a vision that combines a muted political wisdom. There is a message, only he does not engage in bombast or rhetoric.

A rousing 50 Ways to Leave Your Lover had people dancing, early even by Simon standards. He had mentioned that this was his farewell tour “but maybe I’ll just keep coming back to Dublin, I said that in Scotland.” He likes his little jokes. Over the years Simon has become more at ease with speaking to his audience, performing was never a problem but he wasn’t always so good at small talk. His songs are written for rhythm: “So if you feel like dancing, only the couple behind you might not like it.” The couple did not mind. Nobody minded.

Mother and Child Reunion and Me and Julio Down at that Schoolyard also got the crowd moving.

As always at a Simon concert he is accompanied by a brilliant band of world-class musicians and he allows them plenty of scope for dazzling improvisation. The same superior production values he beings to his recordings shape his live performances. Simon, the most musical of singer-songwriters, can add and embellish with ease, his voice mellow, mid-range and still sweet, never showy or strained. His backing singers are terrific and the Dublin crowd is not too bad either – tenacious with an obvious command of the lyrics. The evening sun began gathering strength for a momentous sunset. Simon peers into it; he is very impressed and comments on it.

“Hello my friends” and gasp – from me – the accordionist makes it clear that the next number is The Boy in the Bubble, one of Simon’s greatest hits from the Graceland album. A subtle little interlude begins with Dazzling Blue and slows the mood. But quick as lightening it speeds up with That Was Your Mother. Simon is having fun and recalls asking his father, a musician, to teach him some chords and then he explains how he soon traded an electric guitar for an acoustic one. He could have said: “well the rest is history” only he didn’t – instead he demonstrated his skill with a lovely selection of immediately recognisable musical prologues including The Sound of Silence and Homeward Bound. Cue his witty Rewrite.

He introduces Rene and Georgette Magritte With Their Dog After the War, a song he wrote after looking at a book in Joan Baez’s house. He calls it his surreal song.

Following a stunning performance of Can’t Run But, about a nuclear disaster, he mentioned a song he had written (almost funny considering the amount he has written), one that lots of people had sung; one “that Artie sort of made his own” but Paul Simon at his mildest reasoned as this is a farewell tour, “I want to reclaim my lost child.” Most of his fans had a good idea that “the child” in question was – his spiritual Bridge Over Troubled Water. In an arrangement with Why Music, an outstanding young ensemble, it must be reported that on a Dublin stage at the age of 76 Paul Simon singing at a lower register, did most certainly reclaim his errant child.

He spoke of his friend the guitarist Vincent Nguini from Cameroon and praised the musicians of West Africa asking did the music come from the soil, and in tribute to Nguini performed a song from The Rhythm of the Saints, Spirit Voices.

It is defies all logic as to why the RDS did not rise up and head off skywards as You Can Call Me Al was played to the crowd’s delight.

Habitually sullen teenagers were wearing expressions of new found respect for their ancient parents. The age range could best be described as democratic; the very young were sharing the cramped spaces with people from more than a few generations removed. The three girls in Summer dresses were killing, as in slaughtering, The Boxer yet they certainly knew the words. The RDS, without a horse in sight, took on the appearance of a vast community. A security man who said he was still recovering from his exams, said “this is the only place to be.”

Still Crazy After all These Years resonated with many of the older couples, and there is that eloquent sax solo. Perhaps that should be still brilliant after all these years and here is an artist with Graceland about to send the dancing crowd into further frenzy. And for a finale? The Boxer, Homeward Bound and The Sound of Silence. No one wanted to leave.

The appeal of Phil Collins? It's his friendly, happy face
8

Catching the Worm: Examining the motivation behind scientific research
10