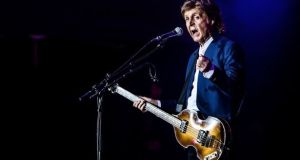 Paul McCartney is to release a new album made entirely alone during lockdown.

McCartney III, comes out on December 11th and will become the third in a loose trilogy of releases for which he has isolated himself from collaborators, after McCartney in 1970 and McCartney II in 1980.

Recorded at the musician’s home in Sussex, England, the album’s songs were built from live takes of McCartney singing over guitar or piano accompaniments, and were overdubbed later with his bass guitar and drum parts.

“It was about making music for yourself rather than making music that has to do a job,” he says. “I had some stuff I’d worked on over the years but sometimes time would run out and it would be left half-finished so I started thinking about what I had. Each day, I’d start recording with the instrument I wrote the song on and then gradually layer it all up. It was a lot of fun.”

The catalyst for the new work was returning to an unreleased song he made in the 1990s with Beatles producer George Martin, When Winter Comes, which closes the album and also inspired another track, Long Tailed Winter Bird.

McCartney has used hallowed equipment including his violin-shaped Hofner bass guitar, a Mellotron from Abbey Road studios used by the Beatles, a double bass that backed Elvis Presley and studio gear from Wings sessions in 1971.

The totally solo home-recording approach is now commonly used by musicians – especially during lockdown– but was unusual in 1970 for the original McCartney album, which was made secretly during the Beatles’ fractious last months. Containing a McCartney classic in Maybe I’m Amazed, it influenced the “lo-fi” style of indie-pop. McCartney II’s skewed electronic pop has also become a cult favourite.

In a new interview with Loud and Quiet magazine, McCartney says the new record focuses on “freedom and love. There’s a varied lot of feelings on it, but I didn’t set out for it to all be like, ‘This is how I feel at this moment.’ The old themes are there, of love and optimism.”

Jokingly alluding to a Beatles conspiracy theory, he added: “When we did Abbey Road I was dead, so everything else is a bonus.”

McCartney had been booked to headline this year’s Glastonbury festival, which was cancelled because of the coronavirus pandemic. His most recent solo album was 2018’s Egypt Station.

Alexis Petridis, chief rock and pop critic for the Guardian, on the arrival of McCartney III

McCartney and McCartney II were greeted with bafflement and derision from contemporary critics but became among their author’s most celebrated solo works, perhaps because they seem so weirdly prescient.

The incredulity McCartney attracted on release in 1970 is understandable: perhaps the most eagerly anticipated Beatles solo debut of all turned out to be a shambolic, primitively recorded collection of instrumentals, song fragments, experiments in what would eventually be called world music, brooding small-hours meditations on McCartney’s shaky post-Beatles mental state, off-cuts from The White Album sessions plus one unimpeachable nugget of classic McCartney songcraft, Maybe I’m Amazed. In its sound and scattershot approach, it was lo-fi decades before there was an alt-rock subgenre called “lo-fi”.

McCartney II, meanwhile, was synth-heavy and recorded as his 1970s band Wings collapsed. The partly atonal Temporary Secretary would be championed by DJs 20 years after its release. Darkroom and Summer’s Day Song appear to presage 21st-century electronic bedroom pop. The wiry post-punk disco of Coming Up, meanwhile, was enough to lure John Lennon back into the studio after five years, his competitive spirit challenged. “F**k a pig, it’s Paul,” he famously exclaimed when he first heard it, turning the radio up.

Both albums underlined the experimental edge that’s often obscured by McCartney’s melodic abilities, and both signalled new starts: McCartney after the Beatles and McCartney II after Wings’ record-breaking success. The hope is that their successor follows in their disruptive spirit. – Guardian