It was once the festival that ruled them all but ticket sales have declined and the line-up has shifted to pop and dance. Will the likes of David Guetta, Calvin Harris and Rita Ora herald a new dawn? 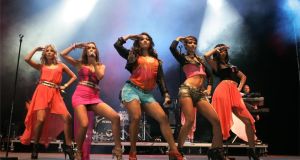 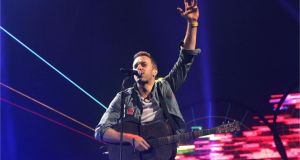 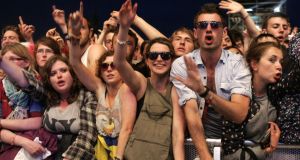 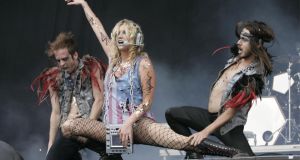 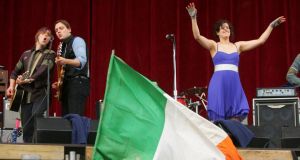 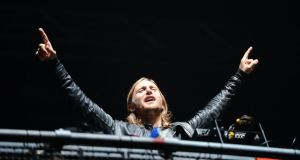 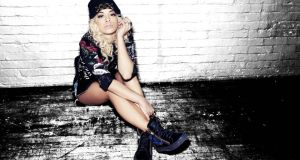 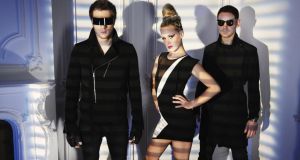 Everything changes, and this maxim applies even to the most famous Irish musical bacchanalia of modern times. But this year’s Oxegen festival, which returns to Punchestown Racecourse after a year’s break, is a much different beast to those previous incarnations which have taken over a couple of hundred acres of the plains of Kildare every year since 2004.

While the event was often more noteworthy for youthful excess and the unruly campsite antics of the punters than for any musical prowess from its performers, Oxegen was usually a fairly reliable barometer when it came to the state of the musical nation. It had room for mega rock stars, leading-edge indie bands, pop pin-ups and the best of the dance acts on the circuit. You name an act and they’ve probably played one of Punchestown’s myriad of stages and lean-tos over the last decade.

That musical mix helped the festival establish itself as the big one of the Irish summer, a rite of passage for the post-Leaving Cert crowd and the place to go to see decent acts for everyone else. If it was good enough for Kings of Leon, The Killers, Jay-Z, Arcade Fire, Coldplay, Foo Fighters, Beyoncé, Snow Patrol, Green Day and hundreds of others, it was good enough for thousands of Irish fans, and the festival was usually a sell-out weeks in advance.


NEW OXEGENERATION
But that was then. In recent years, Oxegen’s lustre and appeal has faded fast. The off-stage behaviour and antics began to take over from the music. The Monday after the festival ended saw phone-in radio shows and online forums filled with – shock, horror! – tales of youths gone wild in a big field in the middle of the country. The festival was bedevilled with problems which would test the skills of the most seasoned PR spinner.

Worse, the volume ticket sales had fallen. A sold-out Oxegen was akin to a Celtic Tiger relic, something which we used to do when we had plenty of money in our arse-pocket. People decided to go elsewhere, and Electric Picnic became the big, hip name on the calendar. Suddenly, Oxegen was looking shabby, rusty and out of sorts.


REWRITE THE SCRIPT
Spending big money on big acts didn’t reverse that trend. In 2009, the festival spent big on acts such as Blur, Fever Ray, The Specials and Nine Inch Nails, but the bulk of the Oxegen audience were buzzing about The Script, Lily Allen, Pet Shop Boys, Lady Gaga, Katy Perry and The Saturdays instead.

The following year, it was Jay-Z, Black Eyed Peas, David Guetta, Eminem and Fatboy Slim who dominated the post-match analysis rather than Arcade Fire, who played to a couple of hundred people on the main stage.

By 2011, it was clear that the people wanted Beyoncé, Ke$ha, Black Eyed Peas and Deadmau5 rather than The National. Thanks to one of the most ill-considered festival booking decisions of all time, The National ended up playing to fewer people at Oxegen than they did in 2005 at Whelans in Dublin. Oxegen-goers seemingly wanted pop and dance rather than indie and rock, so it was time for a change.


CAN I GUETTA WITNNESS?
Enter Oxegen 2013, a bill dominated by dance and pop acts. Your headliners are Calvin Harris and David Guetta, with room also on the bill for Snoop Dogg, Example, Chase & Status, Rita Ora, 2 Many DJs and Alesso. Then, in racing parlance, you have the field with DJs and producers as far as the eye can see and the budget can accommodate.

So, the question is, will the festival sell? For a start, we’re dealing with a 37.5 per cent reduction in capacity from the 80,000 of old to 50,000 this year, so it’s an easier ask, albeit with a reduced budget for acts.

Even at that, though, there was widespread speculation about a move to a smaller venue after promoters MCD and Festival Republic applied for a licence for a 30,000-capacity dance/pop event in Marlay Park for the same weekend. The only ones who know how the event is really doing are the people with access to the Ticketmaster tallies and they’re obviously not talking.


DON’T FEEL LIKE DANCNG
Stevie Grainger is a DJ on Cork’s Red FM, a radio station squarely aimed at the same demographic audience as Oxegen.

“It’s a very radio-friendly line-up – in fact, it looks like the top 40 of electronic acts are pretty much mostly all on there,” he says of this year’s bill. “Obviously, it is targeted at a younger crowd than the original Witnness and Oxegen series of shows, but things have changed and there is a lot more on in 2013.”

While it’s certainly a summer of plenty when it comes to festivals, there are very few other festivals with such a sharply tuned dance/pop remit aimed at this audience. The question is if this is necessarily what the Oxegen audience wants. A considerable constituency of one-time Oxegen regulars are very discombobulated by the move away from rock firmly to pop and dance. A glance at the event’s various social media pages shows that the festival promoters are being castigated at every turn for their new booking policy.

MIXED BLESSINGS
Today FM’s Colm O’Sullivan feels the revamp is worth a try. “There are so many festivals now, all with targeted focus, that adding the mix of previous artists might prove very expensive and not return enough for promoters, so maybe this new focus is good for a festival of this kind. It could explore more angles, maybe even introduce a competition element like Technics World DJ Championship, or add more elements involving upcoming Irish rappers and producers. Maybe it will in future years.”

Grainger, meanwhile, believes that “the mix at big festivals seems to be part of the fun. I’m (just!) out of the target demographic, but I’ve seen Earth Wind and Fire, Odd Future, Ian McCulloch and co working at Oxegen. Obviously other festivals have changed things, but maybe one or two more rock acts might have tilted the balance. The line-up should certainly work for a lot of people, though; the likes of McCulloch and EW&F were probably token bookings at the end of the day.”


RENAME THAT TUNEFEST
Maybe a name-change is in order? “A name change would lend itself to a new experience for the audience and maybe even draw more people in,” thinks O’Sullivan. “People probably still associate Oxegen with huge cross-genre acts.”

“Perhaps it would have been a good time to do so, with the year gap,” thinks Grainger. “But if this year goes well – and the ticket price is apparently much more reasonable – they could yet re-establish the festival’s strong reputation.”


CAMP BEHAVIOUR
It also remains to be seen how other issues beyond the music will impact on the Oxegen turn-out. MCD boss Denis Desmond recently talked about how the company saw the introduction of the property tax leading to “a noticeable dip” in ticket sales. While there are very few Oxegen-goers who are likely to be paying that tax, it’s another outgoing for parents who may well be subsidising the weekend in Co Kildare.

Many of those hard-pressed taxpayers may also recall what happened at last year’s Swedish House Mafia show in the Phoenix Park and have parental cause for concern. Six people were stabbed, 40 were treated in hospital and two men who attended the Phoenix Park concert died afterwards from suspected overdoses. There were also more than 30 arrests.

Given that Oxegen wasn’t on last summer, a number of shows in the Park were pitched as substitutes for the festival, including Swedish House Mafia, who had played Oxegen without incident in 2011.

While Oxegen has had public order problems in the past (90 arrests in 2011, for example, and more than 300 drug seizures), gardaí at the Punchestown event have never reported trouble on the same chaotic scale as last year’s SHM show. There may be a lot of online anecdotal evidence about antisocial behaviour at Oxegen, but it’s not reflected in the police reports from the weekend. What happens on the Oxegen campsites, it seems, stays on the Oxegen campsites, especially as we’re not dealing with a park located slap bang in the middle of the capital city.


HOPING FOR A SHELL-OUT
What will matter this year is the turnout, as Oxegen is pitching its tent firmly as a dance and pop festival and placing all its eggs in that basket. Will it get 50,000 people to part with their cash (or their parents’ cash) to see acts like Guetta, Harris and the Dogg? Or will the festival be forced to go back to the drawing board yet again for 2014? Time to find out.