Nymphs, shepherds and monsters in a rural Irish bar 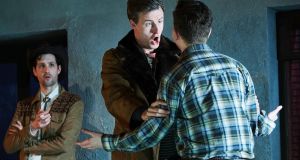 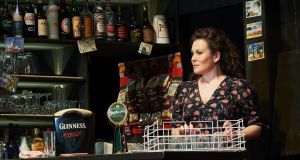 Susanna Fairbairn as the beauteous Galatea in Opera Theatre Company’s production of Handel’s Acis and Galatea. 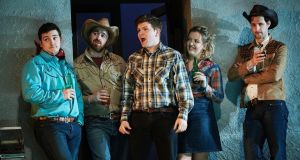 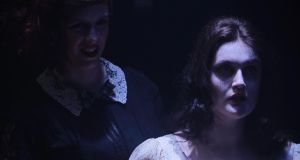 Handel’s Acis and Galatea is a masque rather than an opera proper. “There will be no Action on the stage,” says a 1732 advertisement by Handel, “but the Scene will represent, in a Picturesque Manner, a rural Prospect, with Rocks, Groves, Fountains and Grotto’s [sic]; amongst which will be disposed a Chorus of Nymphs and Shepherds, Habits, and every other Decoration suited to the Subject.”

Opera Theatre Company’s artistic director Fergus Sheil sees his company’s new production of the work, which opened at the National Opera House in Wexford on Saturday, as “a uniquely Irish take”. Director Tom Creed and designers Paul O’Mahony (sets) and Catherine Fay (costumes) have taken Handel’s pastoral world of nymphs, shepherds and monsters and moved it into a rural Irish bar.

But the idea is as much international as Irish. Change the names of the brands in the room and you could easily be in one of the rough Kentucky hangouts that confront maverick lawman Raylan Givens in the TV series Justified. Some Kentucky districts even have smoking bans that would make sense of the rotating set which shifts some of the scenes out of doors when people exit to smoke.

The plot tells how the nymph Galatea (soprano Susanna Fairbairn) resists the advances of the giant Polyphemus (bass baritone Edward Grint). When Polyphemus finds Galatea together with her beloved Acis (tenor Eamonn Mulhall), he kills Acis with something large enough to be called a “massy ruin”. The tightness of the updating can be well gauged by Creed’s treatment of this crucial action. He turns Polyphemus into an obnoxious drunk and has the fatal deed carried out with concrete brick.

The new production brings together the resources of OTC and the Irish Baroque Orchestra, with Peter Whelan directing the period-instruments’ players from the harpsichord. Acis and Galatea is a work that simply brims with Handelian favourites, and Whelan gauges their moods and colours with consistent elan.

The singing mostly matches the spirit of the music-making from the pit. Mulhall and Fairbairn are a well-matched pair of lovers, and Grint an imposing villain. Tenor Andrew Gavin’s Damon is more variable, but excellent when on form, and the other members of the ensemble (Sinéad O’Kelly, Peter O’Reilly, Fearghal Curtis and Cormac Lawlor) flesh out the action well and combine effectively as the chorus. The production tours until Thursday, April 13th, see opera.ie for details.

Igor Levit was back in town during the week, for a Mozart Piano Concerto, ( No 21 in C, K467) with the Irish Chamber Orchestra under Jörg Widmann at the National Concert Hall. Levit is the kind of player you would expect to meet in the context of one of the NCH’s own International Series concerts. It’s a real pleasure to be able to encounter him at the same venue at the ICO’s modest regular ticket prices. The best way to explain Levit’s take on Mozart would be in terms of resolution, the kind of resolution people talk about in relation to the screens on their phones and televisions.

In that sense, Levit is an extremely high-resolution player, able to move well beyond normal curvatures of phrasing, and control of dynamic shading. His playing is the antithesis of plain, and yet it hardly ever becomes fussy. The details that seem so freshly discovered also sound persuasively natural.

Widmann and the players of the ICO matched him in scale and style wherever he chose to go. Widmann’s own typically high-contrast approach yielded exciting results in Mozart’s Don Giovanni Overture and Adagio and Fugue in C minor, which he segued into each other as if they were a single piece.

The concert ended with Mendelssohn’s Reformation symphony, which although numbered as his Fifth was actually the second in order of composition. Much as Widmann has impressed in Mendelssohn with the ICO over the last few years, on this occasion there was too much bluster in a work where there are many moments already at risk of sounding inflated.

Dublin’s Smock Alley Theatre was the setting for Thursday’s première of Siobhán Cleary’s new chamber opera Vampirella. The libretto, based on a story by Angela Carter, is by Katy Hayes. The work was written for and performed by a cast of students from the Royal Irish Academy of Music in collaboration with the Lir academy of dramatic art. The production, directed by Conor Hanratty and with designs by Maree Kearns, was conducted by Andrew Synnott.

The first World War setting for a Carpathian vampire’s seduction of a stage English soldier allowed for an effective transition into a horror much greater than that generated by any vampire. But my impression on the first night was less of an opera than of a theatre piece with singing and incidental music, the result perhaps of a text so strong that it sometimes seemed to have no need of music at all.

The standout performance was Eimear McCarthy Luddy’s Mrs Beane, which came across with a kind of electric presence. Cleary’s score seemed to me at its best when adding electronic sounds that transcended the limitations of the on-stage ensemble. Perhaps this is a case of a genuinely electronic opera trying to break out of a more conventional mold.  mdervan@irishtimes.com