Music is a universal language – with some border checks 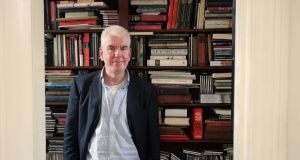 Gerald Barry: his piece Humiliated and Insulted is inspired by a Dostoyevsky novel. Photograph: Alan Betson

Music, it is often said, is a universal language. But not everything musical travels equally freely across international borders. New music travels slowly enough when it comes to live performance. Thomas Adès’s controversial Powder Her Face, the first opera to feature an onstage blow job, took more than 20 years to make it to Ireland. It was seen in Belfast last month, and the Northern Ireland Opera/Opera Theatre Company production will not tour south of the Border until February and March next year.

Meanwhile, Tom Johnson’s minimalist 1970s classic, The Four-Note Opera, didn’t reach these shores until Opera Theatre Company gave the Irish premiere in Carrigallen in 1998. Adès and Johnson are the lucky ones; most new operas don’t make it here at all.

The RTÉ National Symphony Orchestra has long had a lunchtime slot that embraces work by living composers. The window that the National Concert Hall provides on new music from abroad, currently concentrated in the New Music Dublin Festival (coming up, with Thomas Adès and Gerald Barry, from March 2nd to 4th), is patchy at best. The West Cork Chamber Music Festival is a consistent advocate of new work from at home and abroad. Wexford Festival Opera has become an advocate of new opera in English by mostly American composers since David Agler became artistic director in 2005. Music Network encourages the performance of works by Irish composers. And, of course, there are specialised new-music ensembles around the country.

What none of these organisations do, and what most of them simply don’t have the resources to do, is provide a window on the wider world of new works for choir and orchestra. Of all new music, the works on the largest scale with words travel least. There’s the matter of the expense and there’s the matter of the words. Music may be a universal language, but real language can be a genuine barrier.

Gerald Barry’s new Humiliated and Insulted, inspired by Dostoyevsky’s 1861 novel of the same name, bypasses the issue of words. Barry gives the voices just the three words of the title to sing, which they do over and over during the 10-minute duration of the piece. The words are sung always in the same order, but chopped up to suit the rhythm of the music.

“Sing with great power,” exhorts the score. “Be very loud and thunderous!”

The work’s first performance, given by the RTÉ National Symphony Orchestra with the RTÉ Philharmonic Choir under Hans Graf at the National Concert Hall last Friday, was as blunt as the text was repetitive. It felt like a run-through in which the performers had not managed to penetrate the surface of the music, which is rich in Barry’s rhythmic insistence, often executed with a gapped gait.

Graf showed a more sophisticated musical approach in the rest of the concert. The delicacy of his handling of Mahler’s Rückert Lieder was delectable, although the soloist, German baritone Dietrich Henschel, was slow to warm up and at times vocally fragile, though wonderful when he was on target.

Mark Duley’s choir Resurgam have chosen the chapel of Trinity College Dublin for their three-concert Luther 500 celebration. For the opening concert on Saturday, Duley placed the instrumental ensemble in the aisle, with rows of singers seated either side of them.

The layout raised serious issues of balance in a venue where audibility and clarity can often be insurmountable problems. This beautifully serene – and blessedly warm – chapel poses listening challenges that are often almost beyond comprehension. A voice or a player almost near enough to touch can sound as if coming from a place beyond reach.

That said, Duley and his team gave vigorous accounts of a selection of upbeat works by Telemann, Bach and a number of unidentified 17th-century Thuringian composers, with Jörg Jacobi providing organ interludes of pieces by Buxtehude and Pachelbel. The spirit always seemed apt, even if the fine detail was never clear. The series continues on Wednesday and Saturday.

Technology to the fore

Gerald Barry is a composer whose interest in exploiting technology is negligible. But technology was to the fore in Kate Ellis’s solo cello recital at the Hugh Lane gallery on Sunday. Ellis performed in a sort of cocoon, a screen for video projections behind her, an array of music stands in front of her, with microphones and cameras filling up the gaps.

Laura Sheehan’s “live visuals” showed Ellis’s hands at work, so that the sound-production methods of Helmut Lachenmann’s sonically exploratory Pression of 1969 could be seen as well as heard. Given the unorthodox techniques involved as well as the hairline fragility of some of the sounds, the illumination was welcome.

Niall Vallely’s Sondas and Seán Mac Erlaine’s Chair upon Wood upon Stone both present the solo cello against electronic backgrounds, pre-recorded in the case of the Vallely, created live (by the composer himself)  in the case of the Mac Erlaine. Both seemed sweet and mild by comparison with Judith Ring’s Up to my F-holes, a straightforward instrument-and-tape piece. Gremlins disabled the video for this particular work.

The closing piece, Donnacha Dennehy’s Bright Vision, a treatment of Aisling Geal with electronics, was as illuminating of Dennehy as of the original tune.