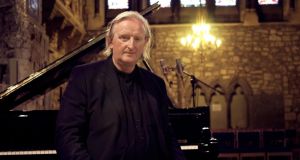 Mícheál Ó Súilleabháin: the University of Limerick paid tribute to its professor’s “pioneering solo albums, which repositioned his chosen instrument, the piano, at the heart of Irish traditional music”

Tributes have poured in for Mícheál Ó Súilleabháin, the pioneering musician and composer, who has died “after a prolonged illness”, his family said.

Ó  Súilleabháin, who was emeritus professor of music at the University of Limerick and founder and director of its Irish World Academy of Music and Dance, died at Milford Care Centre in the city. He was 67. He is survived by his wife, Helen Phelan, a professor of music; their son, Luke; his sons Eoin and Mícheál (Moley); their mother, Dr Nóirín Ní Riain; and his brother John.

The president of the university, Dr Des Fitzgerald, tweeted it was “with enormous sadness” that Ó Súilleabháin’s family had announced his death, and the Irish World Academy of Music and Dance said it was “with profound sadness” that it had heard of the death of its founder, whom the Irish Chamber Orchestra referred to in its tribute as a great friend.

The University of Limerick paid tribute to Ó Súilleabháin’s “series of pioneering solo albums, which repositioned his chosen instrument, the piano, at the heart of Irish traditional music. His richly evocative collaborations with Mel Mercier, who succeeded him as chair.., were a celebration of Ó Súilleabháin’s flinty sense of humour and love of musical exploration.” The professor “left a rich legacy through his own music, as well as the academy he founded, which attracted students from over 50 countries”.

In 2016 Ó Súilleabháin remarked: “I believe in an afterlife. The main evidence for which is nature... It is ridiculous to think there isn’t a presence behind it. The notion of some sort of continuity after physical death is a no-brainer. I wouldn’t like to be reborn as someone else, not even for a day. I’m so worn out trying to be myself.”