Live at the Marquee to bring 80,000 music fans to Cork

Little Mix, Chic and Don Henley among the acts scheduled for this year’s concert series 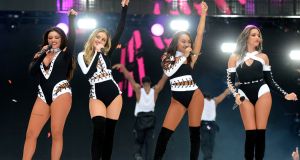 Little Mix are one of the acts scheduled to play this year’s Live at the Marquee concert series in Cork. File photograph: Ryan Phillips/PA Wire

The country may be going soccer mad over the Republic of Ireland’s appearance in Euro 2016 in France, but not even the boys in green can quell Cork’s appetite for rock n’ roll as the Live at the Marquee series of concerts kick off.

More than 80,000 fans are due to attend this year’s Live in the Marquee events, in a tent at the Showgrounds in Cork city.

Some 15,000 fans have already flocked to the tent this summer to see the Dropkick Murphys, The Corrs, Gavin James and Simply Red, who played the venue on Saturday night.

Promoter Peter Aiken admitted that Live at the Marquee continues to surprise 11 years on from its debut in 2005, when he wasn’t sure how Munster audiences would take to the idea of attending concerts in a very large tent.

“Back in 2005 when we put our toes in the water to see what would happen, who would have thought it would still be going strong after more than a decade, but it’s very different to a gig in a stadium where the atmosphere can be quite staid - a marquee creates a far better atmosphere.

“This year, we’ve sold out Little Mix, Walking on Cars, Nathan Carter, the Coronas have sold out two shows, Don Henley will sell out - I’m a big soccer fan but even next Saturday when Ireland are playing Belgium, we still have 2,000 fans coming to a matinee performance of Lord of the Dance.

“I love football and the Euros and GAA too, but there are clearly people who love going to shows and going to gigs - people who love their music and understand what it means to them and they are the people who have made Live at the Marquee such a success over the years.”