Sounds Like Freedom: When music and civil rights join forces 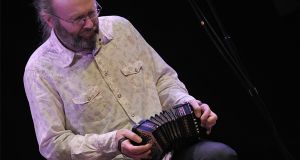 Niall Vallely: ‘I decided not to sit down and write charts and arrangements, and trusted that it would be more about these individuals playing music together than trying to get everybody to fit into some vision that I had’

When concertina player Niall Vallely premiered his provocative new Sounds Like Freedom project at the Kilkenny Arts Festival in August, the night was charged with political as well as musical overtones. The concert, in Kilkenny’s Set Theatre, mixed new compositions with totemic standards of protest and defiance, and ended with band and audience joined together in an emotional rendition of We Shall Overcome, the anthem of the civil rights movements both in the US and Ireland. It was an electrifying moment, made all the more powerful by the less-than-usual ensemble of musicians on the stage –musicians from both sides of the Atlantic for whom the song had deep resonances, even if those resonances were born of two distinct historical moments.

More than half a century on from the marches in Selma, Alabama, and 50 years since the birth of Ireland’s civil rights movement in a similar cauldron of state violence and fragile hope on the streets of Derry, Vallely wanted to put together a project that drew the threads of black American and northern Irish experiences together.

“It’s interesting that Irish people find it easier to talk about civil rights in America than at home,” says Vallely, who was born in in Armagh in 1970, “but I felt that making those connections was a way to have a conversation about it. There was an internationalism about the events that were happening in the North, and that connected with events that happened in the US, and that gave me an excuse to explore some of the musical connections.”

The fulcrum of the seven-piece ensemble that Vallely has assembled to explore those connections is his friendship with US guitarist Brandon Ross. The two met while playing with renowned jazz vocalist Cassandra Wilson in New York.

“Obviously, it was extraordinary to be on the stage hearing Cassandra singing every night,” says Vallely, an innovative figure in Irish traditional music whose embrace of other musical traditions has been generous and sustained. “But the other thing that I connected most with was Brandon’s guitar playing and, at the back of my head, I thought it would be good to do something together at some point.”

The feeling was mutual. As well as his sideman work with some of the lions of free jazz, including Henry Threadgill and Wadada Leo Smith, Ross is a member of acclaimed New York improv trio Harriet Tubman. With Rollins Band bassist Melvin Gibbs and eminent session drummer JT Lewis, who has played with Living Colour and Herbie Hancock among many others, Harriet Tubman – named for the great 19th-century abolitionist and activist who inspired generations of African-American leaders – make a unique sound, fusing the liberation of free jazz with the electric energy of Hendrix and the deep grooves of funk and R&B.

“For me,” says Ross about the defiantly political name of the trio, “Harriet Tubman was about this woman who led people to freedom, who rejected the status quo and chose in the most profound way to violate the laws of the time, to literally risk life and limb to become free. That for us was this metaphor of ‘let’s have this journey of musical freedom’.”

If there is anything defiant about the name of the trio, Ross says it’s defiance by default. “Ever since we started, people have been looking for the big political thing,” he says, speaking from his home in New York. “But just showing up black is political in this country. If we were white guys with the name Harriet Tubman, doing the same thing we do, we’d be stars. It would be read a whole different way, so in that sense it’s political, but in terms of the content of what we’re doing, we’re just working with the music of our forebears and our elders and coming to understand what that is.”

Vallely’s partner, vocalist Karan Casey, was another important part of the inspiration for Sounds Like Freedom. As well as being a renowned singer of traditional songs, Casey spent time in New York hearing and singing jazz, and she developed a particular interest in musicians such as Nina Simone and Mavis Staples, whose music played an important part of raising black consciousness in the civil rights era in the US. In Kilkenny, Casey opened the concert with an emotional reading of Old Jim Crow, Simone’s scorching indictment of segregation, recorded in 1964 and a clarion call of the US civil rights movement.

As well as Casey and the trio from New York, Vallely’s ensemble includes intrepid Belfast harpist Úna Monaghan, who has a degree in astrophysics and serious form when it comes to experimentalism in Irish traditional music, and Scottish fiddler Aidan O’Rourke of British folk trailblazers Lau, a musician with similar interest in bringing traditional music into new spaces. With such an open-minded group of collaborators, Vallely knew he could rely more on their improvisational instincts and less on prescribing roles or providing too much written music.

“I actually did a very minimal amount of pre-planning,” he admits. “I really decided not to sit down and write charts and arrangements for things, and trusted that it would be more about these individuals playing music together than trying to get everybody to fit into some vision that I had.”

We just approached it the way we approach anything we do. How can we make it our own?

It was the right decision. At the concert in Kilkenny, John Coltrane’s Alabama starts like an old Irish air on Vallely’s concertina, with Gibbs’s bass notes and Lewis’s drum rolls gradually entering like rumblings of discontent. As the rest of the band join, feeling their way into a new sonic space, the results are a startlingly fresh fusion of instruments, traditions and ideas.

“I played pretty much note for note the way Coltrane plays it,” protests Vallely, “but it doesn’t sound like that. People were asking me was that an Irish tune but I can’t help it. If I do try to play something like that, it kind of comes out a bit Irish-sounding.”

Ross readily endorses Vallely’s improvisatory approach to the rehearsals. “It actually worked amazingly easily,” he says. “We just approached it the way we approach anything we do. How can we make it our own? What will it sound like made by this collection of people? It was a pretty organic process. If people were smiling about it, we moved in that direction, and if people were frowning, then we backed off.”

A centrepiece of the performance is Vallely’s own Radio Free Armagh (“we’re still waiting for that,” the composer remarks acidly in his on-stage introduction). The piece starts with archive recordings of Bernadette Devlin invoking Tone and Emmett at a civil rights march in Derry, before Vallely’s concertina ushers in a tune that marvellously blends the Irish melodic tradition with a loping West African groove that the Tubman trio brought back from a recent trip to Mali.

At a time of renewed uncertainty, when the status of Northern Ireland and its inhabitants is once again the focus of protest and division, Vallely sees resonance and relevance in his musical evocation of the civil rights era, and he acknowledges the vision and musical courage of the Arts Council in supporting such a provocative project. “I think it’s good that the traditional arts people in the Arts Council are willing to support things that are potentially challenging and aren’t 100 per cent in the traditional music area. It was a good leap of faith on their behalf to support this, as well as by Kilkenny Arts Festival and the National Concert Hall. ”

Sounds Like Freedom may be a journey into new musical spaces; it may be a daring fusion of musical styles; it may be a shared act of protest and evocation by the musicians involved. But before it is any of those things, it is beautiful, life-affirming music, a moment shared between musicians and audience, reaching beyond stylistic or ethnic or national boundaries, reaching for something new and universal. And if that isn’t a fitting metaphor for the kinder, fairer, more tolerant world imagined by those brave souls who marched in Selma and Derry, what is?

Sounds Like Freedom is part of a double bill with experimental US folk musician Sam Amidon which brings the National Concert Hall’s Tradition Now series to a close on Sunday October 6th. More at nch.ie