Lisa O’Neill: ‘A part of me doesn’t understand what it is I do’

That might be true, but on her new album, Pothole in the Sky, the Cavan woman has become a self-assured songwriter, a process catalysed by a tour with David Gray 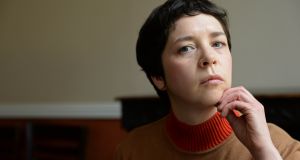 Lisa O’Neill: “I lose concentration very easily; the page is boring for me to look at.” Photograph: Eric Luke

‘I’m owning it more, and I really value that,” says Cavan singer-songwriter, Lisa O’Neill, who is reflecting on the difference a few years can make in terms of confidence and self-assurance.

“I’m not in disbelief any more that this is happening. When I was speaking about my previous album, I would have felt that maybe some people were wondering if I was going to admit to winging it, that what I had were just notions. There was a time when I’d be working with people, musically, and saying that I wasn’t certain what I could do with what I had. Whereas now I feel surer about my songs, and my feelings as to what the songs mean. I really don’t want to say that the song is finished unless it’s as good as it can get.”

Perched on a chair and stylishly dressed, Lisa O’Neill is the odd one out who is finally starting to fit. A barely remembered debut album (2009’s Has an Album) was succeeded in 2013 by the Choice Music Prize-nominated Same Cloth or Not. A new album, Pothole in the Sky, is imminent, and if the template is familiar – sparse singer-songwriter material subtly enhanced by added instrumentation – the songs are not.

“Some of the things I’m writing about on the new album are questions that have been going through and around me from a very young age. But now I know that the songs are genuine messages, that these are things I have figured out. I find that I’m getting to a point where I know how to see things as they really are.”

O’Neill’s rising profile over the past three years has contributed to her increased level of self-possession. She now regards her music as something that merits a wider audience. She has a point. As a former support act on David Gray’s American tour two years ago (as well as being a member of his touring band), O’Neill faced a completely different appreciation society. Since coming off the tour about 18 months ago, she has divided her time between writing new material and accepting invitations to events and festivals that she previously wouldn’t have been considered for.

“When I’m writing I’m somewhere else, but then I step out from that; the more I get invited into the real world with the work I created, the more that becomes natural. Ultimately, I really want to be understood. I want to go on stage, and go into interviews, prepared. I’m not saying that I don’t understand what it is I do, but in truth a part of me doesn’t. I write songs to understand, and I edit them to be understood.”

The new album captures a sense of O’Neill’s realisation that she is the architect of her career and her future. She is a multifaceted, complicated character – the rural Cavan woman who has come to terms with urban living yet doesn’t own a television because she knows it would be “a very unhealthy thing for me. If I had one, I’d be glued to it.”

She prefers the spoken word (“radio, podcasts”) to the visual blitz; even reading is something she doesn’t engage with naturally. “I lose concentration very easily; the page is boring for me to look at.” She views her music in terms of tenor and colour. “Pothole in the Sky is a different colour, a different shape,” she says, adding that the album is about heavy-duty subjects such as “what is life, what is possible, and what can happen to little old me when I’m here”.

She recalls her teenage years in Ballyhaise, Co Cavan with a perceptive uneasiness. The girl she was then and the woman she is now are “never completely” different. A few days before we talk, she found a diary of hers, dated 1997.

“I was 13 years of age. It was a real find to be able to read how my mind was back then, and to see how different my language was.” She pauses for a few seconds. “I was speaking the language of my environment at the time. I didn’t write ‘Dear diary’, I wrote ‘Well, diary, Lisa here’. I’m treating the diary like it’s a friend that I can trust. I didn’t like school, but I liked the people there. I felt invisible. I needed to be seen.”

As a young teenager, she wanted to write, but daydreamed too much. “I felt very guilty about it, because you get told that it’s wrong, but I’m glad I didn’t wake up.” She remembers that she wasn’t really learning music then, so found it difficult to channel her emotions. As for any notions of being a songwriter, let alone a successful one, she says that, like most if not all teenagers, she had no idea what might happen to her.

“All I wanted was to be in love, and all of that would have started to bleed into the music. In a way, that hasn’t changed, although I want more for myself than just that. I’ve come a long way.”

When she glances back at her 13-year-old self, what does she see? Someone, she answers immediately, who was “absolutely lost . . . Like a rabbit in the headlights. It’s a tough time, being a teenager. There’s that beautiful innocence of being eight, nine, 10 years old, and then all of a sudden there’s too much information. Eyes are on you, or at least you feel as if they are. The playfulness leaves you, and the world becomes scary. Except I didn’t know I was scared.”

Almost 20 years later, Lisa O’Neill is no more spooked than the rest of us who have seen decades disappear. Rather, she is at a point in her life where possibilities are lining up, where the potential for bigger- better-brighter is present. She is present, also, in the writing of her new songs – more so than at any other time of her life.

“Yes, totally. I’m learning how valuable it is when they start to flow, and I do what I need to do to stay present. The surge might last only 30 minutes – maybe less, maybe more – so you grab it when you can.”

PRICELESS PEOPLE: O’NEILL’S MENTORS
“A lot of the people I’ve met along the way in the past couple of years have been inspiring: David Gray, Billy Bragg, Kevin Rowland, Andy Irvine. They’re each so focused, they believe in what they do, and I want to have that, too, and do it as well as possible. I couldn’t put a price on what they have done for me. They have taken me out on the road, they have trusted in me. I don’t think I’d be here today if I hadn’t had that. It really made me believe that what I do is accessible.”