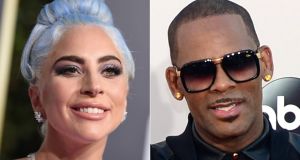 Lady Gaga and R Kelly: “What I am hearing about the allegations against R Kelly is absolutely horrifying and indefensible.” Photographs: AFP/Getty Images

Lady Gaga has apologised for working with R Kelly. Kelly has been accused by numerous women of violent and controlling behaviour, including keeping them, some while under the age of consent, in what’s been described as a “sex cult”. A documentary, Surviving R Kelly, features testimonies from a number of the women. Yesterday, it was reported that new abuse investigations were being launched by prosecutors in Chicago and Atlanta.

Kelly has denied any wrongdoing, and last year recorded a song professing his innocence, on which he sings: “I’m so falsely accused.”

In 2013, Gaga recorded the duet Do What U Want with Kelly. She has now apologised for working with him, saying: “I’m sorry, both for my poor judgment when I was young, and for not speaking out sooner.” She intends to remove the songs from download and streaming services.

“I stand behind these women 1,000%, believe them, know they are suffering and in pain, and feel strongly that their voices should be heard and taken seriously,” she wrote on Instagram. “What I am hearing about the allegations against R Kelly is absolutely horrifying and indefensible.”

Gaga says she wrote the song, whose chorus line runs, “You can’t have my heart and you won’t use my mind but / do what you want with my body”, was intended to “create something extremely defiant and provocative, because I was angry and still hadn’t processed the trauma that had occurred in my own life”, referring to a sexual assault that she suffered. She describes her thinking at the time as “explicitly twisted” and a “confused posttraumatic state”.

Lady Gaga is the most high profile of Kelly’s former collaborators to condemn his actions. Dream Hampton, the producer of Surviving R Kelly, said she asked numerous celebrities, including Lady Gaga, to appear in the documentary and discuss Kelly, but they declined. “I asked Jay-Z. I asked Mary J Blige. I asked Lil Kim, Erykah Badu, Dave Chappelle. Most people just don’t want to touch it,” she said. “I remember Ahmir [Thompson, AKA Questlove] was like, ‘I would do anything for you, but I can’t do this.’ It’s not because they support him; it’s because it’s so messy and muddy. It’s that turning away that has allowed this to go on.”

Soul singer John Legend did appear in the documentary, later tweeting: “To everyone telling me how courageous I am for appearing in the doc, it didn’t feel risky at all – Easy decision.”

Chance the Rapper also appeared in the documentary, saying, “We’re programmed to really be hypersensitive to black male oppression” as a reason many chose to give Kelly the benefit of the doubt. He later added on Twitter: “I apologise for to all his survivors for working with him.”

Others have commented in the wake of the documentary, with R&B singers Ne-Yo and Tank, and rappers Meek Mill and 6lack all condemning Kelly’s alleged behaviour. – Guardian