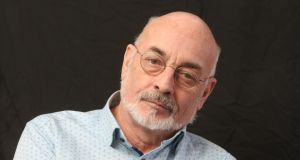 Johnny Lappin: ‘You never lose interest – it isn’t like a job that after 40 years you get a commemorative watch.’

Johnny Lappin knows a thing or two about a thing or two. He might even know, but possibly not admit for the sake of his health, where some bodies are buried. There are few enough Irish music industry figures still living with as much knowledge and insight as Lappin. Now semi-retired from his self-employed position as a music publisher (one of his most recent clients was Evolving Music Company, formed in 1987, and owned by Denis Desmond and Caroline Downey), Lappin is about to publish his memoir, In a Lifetime – from Hozier to U2.

A well-groomed man, with d’Artagnan-style whiskers, Lappin is 69 years of age but looks appreciably younger. He is known for not suffering fools gladly (or, indeed, any other way), unleashing, shall we say, varying levels of abruptness that have ensured his name is removed from certain people’s Christmas card lists. Lappin has also, however, enjoyed a reputation through the years as a diligent professional, with forensic attention to intricately detailed contracts.

Following a spell of working in his father’s painting and decorating business in the early to mid-1970s, Lappin’s love of music superseded every other career option he could think of. Amateur roles as a drummer, a singer, a concert promoter and a band manager came and went. Come the summer of 1977, with his regular 9-to-5 at the family business causing him grief (“I hated it”), a bolt of inspiration, via an off-the-cuff remark, hit him as he was travelling from Dublin to Macroom for Ireland’s first rock music festival. Instead of trying to manage things that were out of his control, he thought, why not manage songs?

When a 100-page contract lands on your desk from a major record company, then by Jesus you had better know what you’re doing

What initially piqued his interest in music publishing, he says, was its dependence on attention to detail. “I was looking for something I could do well in the business. While part of it is having a good pair of ears, and knowing how to work or exploit the inherent value of the song, I felt from previous experience in my father’s business that I could do the admin side of things, that it was a career I could do and enjoy, providing I worked hard at it.”

The wry, pragmatic way Lappin tells it, songs wouldn’t argue with him, turn up late for meetings, get drunk before going on stage, or annoy him in the way that all bands and musicians annoy their managers. “They also wouldn’t upset key figures in their own careers or get lost in nightclubs. They didn’t phone you in the middle of the night expecting you to sort out their marital difficulties or find a mechanic to fix their car. No, songs were relatively trouble-free.”

Semi-retired he might be, but he says it’s virtually impossible to walk away from being a music publisher. With his own publishing company still a going concern, he says, “you never lose interest – it isn’t like a job that after 40 years you get a commemorative watch.”

By the end of the 1970s, Ireland’s music industry, such as it was, began to take shape. The showband era was gradually coming to a close, and Lappin – in the thick of it with the likes of U2, Hot Press, 2FM, and other music scene movers and shakers such as Pat Egan, Terry O’Neill and more – was driving a pioneering stake into the ground. Like his fellow workers at the frontline of creating a new era in Irish music, he didn’t desire to have anything to do with the way the showbands – and their managers – operated. “I wanted to part of the creative process of rock music.”

To this end, Scoff Records was founded in 1978. A long forgotten achievement of Lappin’s (and of musician Deke O’Brien, his then record label partner), Scoff was one of the first Irish rock music indie labels. Via records from the likes of Male Caucasians, The Atrix, The Rhythm Kings, and Stano, it paved the way for other no less industrious ventures.

“Deke and I were committed to developing rock music in what was to a large extent still a showband-dominated country. We were viewed as complete outsiders, but we didn’t really care. It changed when U2 began to break through, when Hot Press started and when 2FM came on air. Before that, there was little or no infrastructure.”

Fast-forward 40 years, infrastructure is no longer an issue. The work that Lappin (who is also a founder director of IMRO – Irish Music Rights Organisation) and others did all those years ago laid the foundations for an industry that has long stopped tugging at the hem of its international counterparts or which is limited by geography. There are, however, concerns pertaining to copyright laws that Lappin hopes will be resolved within several years.

It’s fine for laws to be ratified in Europe, he asserts, but what about America? Because of technological advances, geographical boundaries no longer matter. It will take time to standardise these problems globally, he emphasises, but it will happen. Another contentious copyright issue is the pitifully small amounts of money songwriters receive from streaming services like Spotify and several others.

Each streaming service has a different pay rate, he explains. “In my experience, in general, the fee for one stream is in the region of .0003c, or something like that. It is seriously a very small amount. The bigger picture, however, is that if an artist or writer of the song gets enough streams it drives people to the live shows. Typically, if an artist receives so many plays in certain parts of the world, then they can monetise their popularity in those areas by travelling there and playing gigs. All the money now is in gigs, which is why so many acts are touring.” A fair per-stream rate (“if it was somewhere around five cent, we’d be delighted”) is in the pipeline, but no one is holding their breath, he says, for such a rate to be granted any time soon.

Perhaps Lappin’s finest professional achievement is being presented, in 2015, with an Ivor Novello Award as publisher for Hozier’s breakthrough song, Take Me to Church. One of his book chapters (Hozier – Take me to the Charts) is a riveting, exemplary outline of his cat-and-mouse negotiations for the Wicklow singer’s publishing contract. “There’s a fine line to be walked,” he writes, “between trying to improve an offer one more time and maybe killing the deal stone dead forever . . . That’s where a combination of instinct, knowledge, experience and realism comes in.”

Nailing the publishing deal for Hozier, relates Lappin, was “essentially about negotiating strengths, and my knowledge of how the process – the business and the pitfalls – works. When I started the Hozier negotiations, I had all the major record labels coming to me. Luckily enough, I had the expertise to be able to go into many offices, sit down and talk about things.”

If any artist or manager, he suggests, sends into a record company lawyer’s office a person who doesn’t know what they’re talking about, then it’s game over at worst, game postponed at best.

Not that Johnny Lappin thinks for a second the game will ever be abandoned – there is simply too much at stake. Yet it is relatively easy, he hints, to forget why people are in the first place as they discuss and consider the finer points of a contract: the song.

“The song is where it all starts,” he says, allowing no argument. “When you have the song, as a music publisher you’re out fighting for the songwriter. Without a song, you have nothing.”

In a Lifetime – from Hozier to U2, by Johnny Lappin, is published by Foxrock Music Productions on June 27th

Johnny Lappin and the Hozier contract

“That particular contract took me six months – it was talking in detail about various aspects, and of whether or not a word should be included or taken out of a clause in the contract. That’s how intense it was. Because I knew what I was doing, I would know what the clause with or without that word meant, and so would my lawyer.

“We were negotiating with major record labels, who would have a battery of people in their business affairs office, and they’ll put in something that you want taken out. It has always been like that and it always will be. When you’re negotiating with major labels on behalf of a serious songwriter it is a completely different level – the very top. At a lower level, it isn’t as difficult or intense, a bit more straightforward, in fact.

“With worldwide major record companies aiming to nab a songwriter as good as Hozier, however, you’re going to receive 100-page contracts. When they land on your desk, then by Jesus you had better know what you’re doing.”