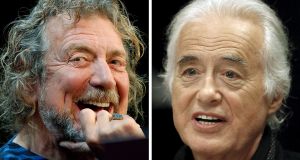 Led Zeppelin guitarist Jimmy Page said on Thursday that the riff he is accused of stealing for the band’s 1971 hit Stairway to Heaven is in fact a commonly used chord progression similar to a melody from the 1964 movie musical Mary Poppins.

Page, with his ex-bandmate Robert Plant looking on, took the witness stand for a second day in a copyright infringement trial in a Los Angeles federal court.

The civil action, brought by a trustee for Randy Wolfe, the late guitarist for US band Spirit, contends the British band stole the descending chromatic four-chord progression at the beginning of their signature song from Spirit’s 1967 instrumental, titled Taurus.

Page, under questioning by an attorney for the plaintiff, repeatedly said he was not sure whether any similarity exists between Stairway to Heaven and Taurus.

He was quicker to draw a comparison to Chim Chim Cheree in Mary Poppins, when asked about a written declaration he gave for the lawsuit where he talked about Stairway to Heaven and the more uptempo song from the Disney film.

The testimony from Page, whom many consider one of the greatest guitarists in rock history, is in line with similar statements made by attorneys for Led Zeppelin, who argue the chord progression has long been in common use.

In 2008, the business magazine Condé Nast Portfolio estimated that Stairway to Heaven had generated more than $560 million in royalties.

Do you think they sound the same?

More recently, a company to benefit members of Led Zeppelin and their heirs distributed more than £6.6 million British last year from royalty payments on the band’s songs over the previous 12 months, Page testified.

Michael Skidmore, the trustee for Wolfe’s estate, has said Page may have been inspired to write Stairway to Heaven after hearing California-based Spirit perform Taurus while the bands toured together in 1968 and 1969.

The lawsuit seeks a writing credit for Wolfe on the song and damages in an amount to be proven at trial.

Page (72), on Wednesday testified that he did not recall hearing Taurus until recently, after he had been made aware of comparisons being made between the two songs.

Plant is also expected to testify in the case.

A couple of years ago, Page said, his son-in-law told him that people online were comparing Stairway to Heaven to Taurus, a 1968 song by the lesser-known group Spirit.

But when Page finally heard the other song, it sounded “totally alien” to him. “I know that I had never heard it before,” he said.

Page and Plant are defending themselves in the music industry’s latest copyright trial, a year after Robin Thicke and Pharrell Williams were ordered to pay $5.3 million (€4.7 million) to the family of Marvin Gaye over their song Blurred Lines.

Page admitted that he owned a copy of Spirit’s 1968 debut album, which contains Taurus, although he said he did not know how he got it. His record collection contains 4,329 vinyl albums and 5,882 CDs, he said.

Earlier in the day, Mark Andes, the bassist in Spirit, testified that Taurus had been a regular part of the band’s set in its early days. He said he remembered drinking beer and playing snooker with Plant after Spirit played a club in Birmingham, England, in 1970.

“We had a blast,” Andes said. With its accusation of plagiarism in one of the most famous and lucrative songs in rock history, the case has riveted the music industry, and the courtroom was packed with reporters and fans.

The day had moments of levity, as when Page told the plaintiff’s lawyer, Francis Malofiy, that he had begun playing guitar at age 12 and was in professional recording sessions by 17. “You had a gift, you played the guitar,” Malofiy said. “Well, yeah,” Page said, to laughter in the courtroom.