It’s the most marketed time of the year 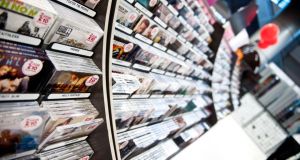 It’s Q4 and we all know what that means. Between now and December 24th, the race is on in the retail world to flog enough stuff to keep everyone happy and hit all those fourth-quarter targets before the sales tags are dragged out of storage.

For the music business, this is the busiest time of the year. The live side of the house will be announcing big gigs for 2015 on what will seem to be an almost daily basis (let’s hope some of the gigs are a bit more impressive than The Script at Croke Park). This is with an eye to ensuring that tickets will sell well in the pre-Christmas market.

Meanwhile, those in the record sector have been working for months to make sure their releases are ready for lift-off. The labels will be ready when the great and the good wander into record shops for the first time in 12 months looking for baubles which will suffice as presents for their loved ones and in-laws.

Aside from new albums from the usual assortment of big names, you will also see rack after rack containing every sort of lavish box-set, spurious compilation and reissued masterpiece imaginable. As the weeks go by and desperation sets in, the most ludicrous of products will find a buyer.

Some may wonder why the record industry can come up trumps at this time annually, but are unable to repeat the trick at any other time of the year. There are several reasons. November and December are peak retail months, when all sorts of tat are deemed worthy of purchase and wrapping paper.

You also don’t get the same amount of high-profile releases at any other time of the year. Albums from Foo Fighters, Damien Rice, Bob Dylan, Calvin Harris, Taylor Swift and Pink Floyd are hitting the shelves with a clatter right now because the labels realise there’s more of a chance to flog thousands.

More importantly for an industry which is still unduly fixated on high mark-up objects, November and December are the months when physical sales are what truly matter. You could, of course, buy a voucher for your favourite streaming service, but that wouldn’t look as impressive as a box-set or vinyl double-album under a tree on December 25th.

Then, there’s the fact that these are the weeks when those few remaining record shops actually do the bulk of their business. You just don’t get the same footfall to justify a similar big effort from the labels or shops in February or May.

The days of the big event releases are also over – those albums which the industry believed drew more people into the shops to purchase other records. There was, after all, no midnight queue outside HMV on Dublin’s Grafton Street this year vying to buy U2’s Songs Of Innocence. These days, it would appear that a record shop is just for Christmas and not for life.

YOU’VE GOT TO HEAR THIS
Arca - Xen
(Mute)

Alejandro Ghersi made his rep on productions for FKA Twigs, Kanye West, Mykki Blanco, Kelela and Bjork. You can understand why the Venezuelan-born New Yorker is in demand when you listen to Xen, a record which catches him moving between the abstract hip-hop of his other productions and newer, much more exciting sonic high ground.

ETC
Chevron Lives It’s more than a year since that great musician Philip Chevron died. A few weeks ago, the former Pogue and Radiator from Space’s guitars were donated to Mountjoy Prison as part of the Jail Guitar Doors initiative. “Chevron Lives” is an evening to mark his life and work with contributions from Roddy Doyle, Joseph O’Connor, Cait O’Riordan, Gavin Glass, Trouble Pilgrims, Raynond Meade and many more. It takes place at Dublin’s Sugar Club on November 23rd.

Marian Keyes: ‘I thought when I stopped drinking my life was over. It was just beginning’
7