Irish Eurovision hopes go up, up and away as Murray fails to make final

Brendan Murray will perform 'Dying To Try' at the Eurovision Song Contest in Ukraine. The ballad was co-written by Swedish songwriter Jörgen Elofsson and British songwriter James Newman. Video: RTÉ 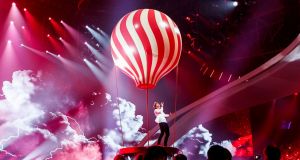 Brendan Murray’s balloon has deflated. The Irish man sadly failed to make the final of the 62nd Eurovision song contest with ‘Dying to Try’.

Before the voting finished, he had said, “whatever happens, I will always remember this.”

And minutes after he sang he tweeted: “Best 3 minutes of my life.”

Before the semi-final, Murray and his mentor, Louis Walsh, were being photographed in Maidan Nezalezhnosti, birthplace of the 2014 Ukrainian revolution.

Walsh gazed at the unfinished “Arch of Diversity” partially painted to resemble a rainbow but unfinished due to far-right intimidation. He read a huge canvas sign aloud: “Freedom is our religion.”

“Why so glum, Patrick?” asked the music manager. “I suppose you ARE with The Irish Times.”

I was glum because a woman was trying to sell me military ribbons and I had no money. She turned her attentions to Walsh.

Walsh then gazed at the nearby “Arch of Diversity”, partially painted to resemble a rainbow but unfinished due to far-right intimidation.

He read a huge canvas sign aloud: “Freedom is our religion.”

He had arrived in Kiev the night before to support his mentee, 20-year-old Brendan Murray, as he represents Ireland in the 62nd Eurovision Song Contest.

Walsh had suggested Murray as our entry to Michael Kealy, the head of Ireland’s Eurovision delegation.

He also selected the song Murray will sing - Dying to Try.

Walsh said he spent a lot of time hustling songwriters.

“I picked a ballad because it shows off his voice and ballads worked for Ireland before.”

Murray’s brother, sister, and uncle had also come to the Ukraine, all the way from Galway. The photographer politely manoeuvred them all into position for a photo, ahead of Murray’s appearance in Thursday’s second semi-final.

Hey guys! 😊 The song I'll be representing Ireland with this year at @Eurovision is,

“I can see Russia from my house!” said Walsh, possibly unwisely, given this nation’s ongoing conflict with Russia and the fact the square contained a lot of soldiers. He said it twice. He also likened the soldiers to the Village People.

Murray himself seemed pretty unflappable, and was happy to pose for photographs with anyone who asked.

“My wife says you’re her favourite,” said a man from the Austrian delegation.

“Save your voice,” Walsh kept saying. “He’s such a nice kid. He never wants to say ‘no’ to anyone, but with a big ballad you have to be able to hit the high notes. There are notes here that nobody else is singing.”

Murray has played on big stages before, with the now defunct Walsh-managed boyband Hometown.

Eurovision will be his first time singing alone “since I was in a talent show at age 13”.

So his first time singing publicly on his own in years will be in front of 200 million people or so? “Pretty much, yeah,” he said.

The day before, he said, he had spent the rehearsal worrying about hitting his cues.

On Thursday, after supportive calls from Shane Filan and Nicky Byrne from Westlife, he appeared relaxed enough.

In contrast, his older sister Sinead was “sick with nerves”. She had played in bands herself when she was younger.

“She was on Kenny Live once,” said her uncle, Brendan Fitzgerald.

“I was born in the wrong decade,” she said, smiling.

Murray had his guitar with him, though he wasn’t going to be using it in his performance.

On Wednesday, he escaped the interminably-long dress rehearsal to relax backstage on a beanbag playing Beatles songs.

“We snuck him out,” said Rayna Connery, the RTÉ press representative.

On RTÉ’s bus to the venue, Nicoline Refsing, the award-winning Danish set designer, told me that Murray’s balloon-themed set was a metaphor for the uncontrollable nature of love.

“You need something audiences will remember when they’re voting,” she said.

She also looked after the Swiss entry. Oh dear, did she have split loyalties?

“They’re both my babies. I want them both to win.”

Walsh was in mischievous form on the bus. He praised Kealy and his team effusively but he also teased them.

He should know - he has attended 10 Eurovisions and worked with many of Ireland’s entries, including Johnny Logan, Linda Martin, and Jedward.

“But it’s mainly a television show now,” he said. “There are all these fans, and they’re great - it couldn’t happen without them - but do they even buy records? They’re always asking for free ones.”

Further back on the bus, Murray made videos for social media.

As we got off the bus, Walsh said: “This could be a rehearsal for him to come back and win it. He’s got the vocals, he just needs the winning song.”