In Jah we trust: how reggae spread the Rasta word 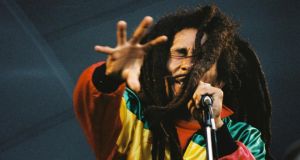 Music and religion have long made for a potent mix. In the case of reggae and the Rastafari religion, the links go deep, as a new compilation from the Soul Jazz label makes clear.

Rastafari: The Dreads Enter Babylon, 1955-83 is a fascinating document. Musically, it’s a great account of how Rastafari beliefs found their way into the sound of acts such as Ashanti Roy, Johnny Clarke, Winston & Ansell, Rod Taylor and many others.

But the compilation also presents a compelling socioeconomic tale of how the Rasta religion grew in profile and popularity in Jamaica from the 1930s on.

Haile Selassie was crowned emperor of Ethiopia in 1930. For the Rastas, Selassie was the man, the messiah who would lead them to the promised land of Zion, as predicted by such influential figures on Rastafari thinking and beliefs as Marcus Garvey and Leonard Howell.

Given their worship of him, Selassie’s visit to Jamaica in 1966 was a seismic event for Jamaica’s Rastafari believers. They packed the airport and roads around Kingston to see this man, who was considered a god.

Selassie was a Christian and was reportedly quite astonished by the Rasta belief in his powers, although this did not lessen their devotion to him.

When the Rastafari movement first came to prominence on the island, it was against a backdrop of colonialism, economic depression and a growing awareness around the notion of independence led by figures such as Garvey. For many years, the Rasta dream of a return to Africa mixed with ideas about cannabis, vegetarianism, meditation, an Ethiopian king, the Mau Mau fighters of Kenya and dreadlocks ensured the religion was marginalised and shunned by mainstream Jamaican society. The believers didn’t care that much, seeing this treatment as further examples of the corrupt Babylon of the western world.

In many ways it was music that brought the Rastas into the limelight. Be it the early days, when you had mento acts on the island, such as Lord Lebby, talking about Ethiopianism, or the 1970s, when reggae hit the mainstream worldwide with acts and Rastas such as Bob Marley, Peter Tosh and others, reggae music has always had close links with the Rastas.

If you were to credit one man with bringing reggae and Rastas together, that would be Count Ossie. There were others who played a part in the early days – such as Laurel Aitken, who recorded many pro-Rasta songs early in his career – but Ossie was key because his drumming workshops were where many musicians first found out about the Rastafari movement.

At Ossie’s home in the hills above Kingston, musicians such as Don Drummond, Tommy McCook, Lloyd Knibbs and Johnny Moore heard the Rastafari drummers cast a spell with their style of hand-drumming and learned more about their beliefs. This sound turned Jamaican Kumina sounds and Congolese Bantu traditionals into Rastafari Nyabinghi rhythms through the use of the akete, fundue and bass drums.

In turn, these musicians spread the word in camps, compounds and yards all over Kingston.

In the fever that followed Selassie’s 1966 visit, more and more musicians pronounced their allegiance to the Rasta faith.

The subsequent commercial success of acts such as Burning Spear, Augustus Pablo, Max Romeo, Gregory Isaacs, U Roy, the Abyssinians, the Congos and hundreds more ensured reggae and the Rastas were inextricably linked in the public mind.

The most prominent exponent of this crossover were Bob Marley and The Wailers. Marley was hugely influenced by Mortimer Planno, a renowned Rasta elder and a member of the delegation sent to Ethiopia to meet Selassie in 1961, and the singer’s worldwide breakthrough in the 1970s helped to spread the gospel of the Rastas to a new audience.

The Soul Jazz compilation, possibly the most righteous record to be released to date by the label, is a good primer about the interplay between the music and religion. The Rastafari rhythms and the power of the percussion are to the fore on every track, while the beliefs about Ethiopia, Selassie, Garvey and the promised return to Zion, as well as highly distinctive lingo, are present and correct.

The Rastafari movement continued to influence Jamaican music long after the death of Bob Marley in 1981 and can be found in areas such as roots reggae and dancehall. Acts that have gained attention in recent years such as Capleton, Sizzla, Barrington Levy, Luciano and others have all professed their allegiance to the cause.

You can be sure Soul Jazz will be going back to the well for more in the future.

Women, as written by Roald Dahl
9