If Niall Horan’s solo career is a B&B in Mullingar, Harry Styles is the Chelsea Hotel 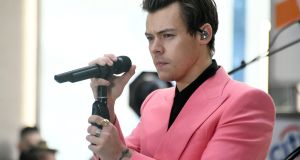 There’s an element of giving into Harry Styles as his debut self-titled album just gobbles you right up, even though you know you shouldn’t.

It sounds like he listened to Dark Side of the Moon once and then closed his eyes, waved his hand over a copy of Mojo magazine from 2003 and his finger landed halfway between The Dandy Warhols’ Welcome to the Monkey House and Jet’s Get Born. He’s lauding a past that lauded a time even further past. This is 1970s New York styled-rock but through the Mayfair filter on Instagram.

Let Kiwi set the scene. A jumpy guitar rock song with Styles howling at the moon for a girl who ploughs her way through cocaine (“Holland Tunnel for a nose” allegedly) and claims “I’m having your baby but it’s none of your business”. If Niall Horan’s solo career is a B&B in Mullingar, Styles’s is a grotty room in the Chelsea Hotel, or so he’d like you to think.

We’ve been here before. Cast your memory back to when Robbie Williams pushed his boyband days aside, hung out with the Gallagher brothers for a few days and his headline slot at Slane 1999 felt like the Eucharistic Congress, bringing an entire country to its knees.

This is Styles’s time. It doesn’t help that the first few bars of his cinematic lead single Sign of the Times – an excellent song to drive to – closely match the opening lines of Williams’s Angels. I sit and wait . . .

Carolina, with its la-la-la bridge, is easy listening to its very core but it is by no means lift music. It’s the soundtrack to Sol Beer soaked BBQs in rainy June. Sweet Creature is a not-so-subtle attempt at being this album’s Blackbird but The Beatles he is not.

A wanton woman makes another appearance on Only Angel: “I got splinters in my knuckles crawling across the floor/ Couldn’t take you home to mother in a skirt that short”. Woman, unforgivingly, opens with “Should we just search romantic comedies on Netflix and see what we find?” but the gentle Bennie and the Jets piano bounce slightly saves that.

Harry Styles the album is a counteragent to his mega pop days and Harry Styles the person is an endearing fellow with oodles of charisma – think Dave Grohl in a pink pantsuit – which forgives any schmaltz found on his debut record. Since the age of 16, he has been a superstar and this solo offering is about to propel him even further: who are we to resist?