I’m slightly proud that I don’t get Ed Sheeran

I listen to his songs for an hour, but still feel as if I’ve never heard a single one of them 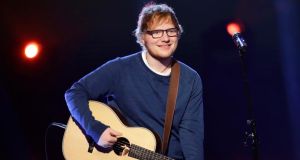 Ed Sheeran. “I know what he looks like, of course. It is scarcely possible to access any medium without catching a glimpse of Ed’s ginger head.” Photograph: AP Photo/Antonio Calanni

Don’t you just hate people who seem proud of their ignorance as regards popular culture? They will raise a curious eyebrow when you mention Star Wars and allow a smug smile to spread across the lips as they explain that they’ve seen none of the films. They cannot tell you who this “One Direction” is. They will get the names of superheroes wrong.

Not knowing this stuff is fine. It’s the sense of superiority such people adopt that grinds my gears. “Oh look at me,” nobody really says. “I can’t tell the difference between Hollyoaks and Waterloo Road. Give me a Nobel Prize for Smug, Ignorant Blowhardery. Hey, I don’t know who Lady GooGoo is either. Can I have a Pulitzer?”

Ignorance is never worth boasting about. Yes, it can be difficult keeping up with the never-ending flow of culture. Just today, I sought elucidation on the new enthusiasm for “Unicorn food” (it’s very brightly coloured, apparently).

But, before typing the phrase into Google, I spent no time bragging about my disconnection from happening culinary crazes. I do not write “never heard of her” in the comments sections beneath interviews with pop stars. I don’t think it’s funny to call Beyoncé’s husband “Jay-Zed”.

People who do this are awful. You wouldn’t catch them boasting about not knowing the capital of Honduras. (It’s Tegucigalpa, I now learn. I feel no pride at having to admit that I looked it up.)

Here’s the nub. I wouldn’t recognise an Ed Sheeran song if I heard one. Until this week, I couldn’t even have told you the title of a Sheeran track.

I know what he looks like, of course. It is scarcely possible to access any medium without catching a glimpse of Ed’s ginger head. I am aware that he plays an acoustic guitar. I believe he’s a nice fellow. But no Sheeran chord has registered as such in my brain.

This is an unusual thing. I have never watched an episode of any CSI incarnation. I have never read a book by JK Rowling. But those entities don’t seep into your brain by stealth.

I can only assume that Sheeran’s music must be everywhere. It is played at me in taxis. I hear it when queuing up to buy a unicorn latte in Starbucks. I have a memory of him making his noises during Bridget Jones’s Baby. Yet nothing has set in.

This didn’t happen with The Spice Girls. It would have required hypnosis or the application of a javelin to frontal lobes to pass through mid-1990s Ireland without taking Wannabe on board. Nobody escaped 2005 without knowing what Crazy Frog sounded like.

Sheeran is at least as popular a phenomenon as those two very different acts. Earlier this year, all 16 songs from his new album occupied places in the top 20 singles listings, while each of his three LPs sat in the top five albums chart. The guy has sold out Wembley Stadium three times. I’m sure if I look hard enough I’ll discover that he’s bigger than The Beatles.

There is usually some statistic to prove that The Bay City Rollers/Shakin’ Stevens/Backstreet Boys (delete according to decade) meets that description.

We can quickly get around this. When something similar has happened before, I have eventually heard a familiar earworm – its title hitherto unknown to me – identified as being by the relevant band and bellowed: “Oh, that’s by THEM! Now, I get it.”

The second incarnation of Take That was a good example. “Oh, the completely awesome Rule the World and Patience are by four-man Take That. Now I get it.” That sort of thing.

Look, I don’t know how this happened. But, after lurking over my chosen streaming service for an hour, I still feel as if I’ve never heard a single one of these Sheeran songs.

Thinking Out Loud, the first ever tune to spend an entire year in the top 40, is so drably innocuous that I forgot what it sounded like while I was actually listening to it. A bit of The A Team, his first hit, only causes me to yearn for the infinitely more entertaining chords of the theme to the similarly titled TV show.

The less said about the current Galway Girl, the sooner I can pretend that pseudo-Celtic, acoustic rap is not really a thing. The songs aren’t even annoying enough to be memorable for the wrong reasons.

So, whereas I am now able to name a Sheeran track or two, I can still no longer identify any by ear.

I can’t deny it. I will not tell a lie. I feel slightly proud of this fact. But I am ashamed that I am slightly proud. Does that make it all right?